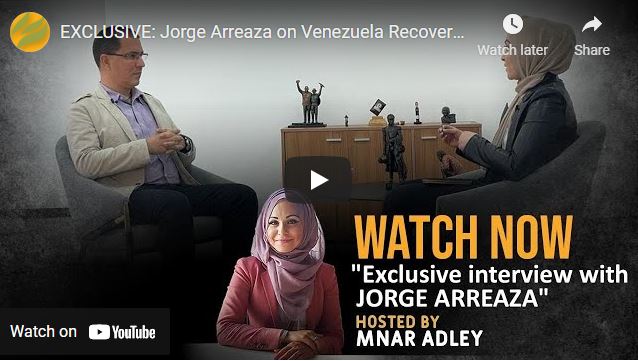 “I think our oil industry is going to grow and be maybe even more important than it was before, because now we know how to do many things by ourselves that we thought that we couldn’t. And the sanctions helped us in that sense.” — Jorge Arreaza, Venezuelan Minister of Basic Industries

UN Special Rapporteurs estimate that 100,000 people have died in Venezuela in the last decade because of the lack of medicine brought on by U.S. sanctions. Nearly 60% of those deaths took place under the Trump administration after Washington escalated its economic warfare on the Bolivarian state. During the Trump era, Jorge Arreaza served as Venezuela’s foreign minister and spent years building diplomatic ties with other nations amid Washington’s aggressive hybrid war.

“After 22 years of revolution, we have had to deal with President Clinton, President Bush, President Obama, President Trump, and President Biden. And there are no major differences between them because it is not a matter of who is in the Oval Office; it is a matter of who really controls the decisions in the United States,” Arreaza told MintPress. He continued:

The pressure is less with Biden because, while he hasn’t lifted any sanctions (they are in place, they are harming the people and causing a lot of damage against our economy and our society), he [also] hasn’t put new sanctions in place. In the Trump era, this was almost on a daily basis… As long as the elite that rules the U.S. doesn’t accept and recognize that there are free people in Latin America and that we are independent nations and not their backyard, that they have to respect us — if that doesn’t happen, we are always going to have tensions.”

While Donald Trump escalated sanctions against Caracas, it was indeed the Obama administration that built the framework of the United States sanctions regime to appease hawks in his administration. Alex Main, International Policy Director for the Center for Economic and Policy Research, told MintPress:

Through an executive order, Obama created the framework of the sanctions regime against Venezuela, declaring Venezuela an unusual and extraordinary threat; which is what he had to do to use the International Economic Emergency Powers Act, which allows U.S. presidents to unilaterally impose sanctions on foreign entities without having to get congressional approval.”

Main explained that Trump built on Obama’s framework, allowing Marco Rubio to choose regime-change hawks to appoint into high places, where they carried out a crusade against the South American nation. He continued:

In August 2017, while golfing, Trump threatened Venezuela with military intervention for the first time. Within the same month, the U.S. president announced sweeping financial sanctions that were designed to asphyxiate the Venezuelan government and, by extension, the country. This led to a rapid decrease in the production of oil, due to the lack of financing available to maintain the oil fields. The Trump administration continued to escalate it’s economic war, which led to depleted foreign exchange in which to buy imports, including medicine and food.”

Earlier this year, Arreaza left his position as foreign minister and was appointed as the new minister of basic industries, helping to oversee and develop a plan to revive Venezuela’s industries most affected by sanctions: oil and minerals. The goal is to allow Venezuela to become less reliant on imports and become self-sufficient in the face of sanctions. Venezuela is home to not just the largest oil reserves in Latin America, but also the largest mineral reserves in the region — including iron ore, aluminum, gold, and other precious metals that Western corporations have had their eyes on to fuel the tech boom. While the oil industry suffered because of lack of financing, the mineral extraction industry was unable to develop and flourish because sanctions prevented Venezuela from importing parts to repair the mining machines.

Arreaza is very confident that the oil industry will bounce back stronger than ever, thanks to the ingenuity of the rank-and-file workforce at the state-owned oil company PDVSA, revealing that it has already recovered almost to the level it was at before American sanctions. He elaborated:

We did things that the U.S. did not even imagine that we could do to recover our oil industry. And we, of course, trusted in the working class of PDVSA. They have done this by themselves. We, as the government, brought all the spare parts and chemical components that were needed. I can’t tell you how, because if I tell you, then they would try to stop this from happening. But it was the working class; the workers from PDVSA, who really made this miracle happen. So I think our oil industry is going to grow and be maybe even more important than it was before, because now we know how to do many things by ourselves that we thought that we couldn’t. And the sanctions helped us in that sense.”

Arreaza also noted that the government has plans to use oil revenues to develop society and create jobs across Venezuela. “We need to diversify our economy. And the oil will be the most important tool that we have to invest in other sectors of our economy,” he said. If his assertions prove correct, Venezuela may have weathered the storm and there could be sunnier days ahead for the country, much to Washington’s dismay.