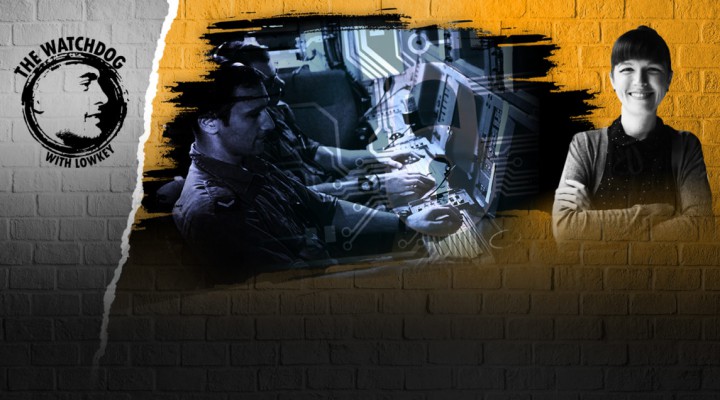 Lowkey is joined by Whitney Webb to examine the IDF’s military intelligence Unit 8200, which gave birth to the NSO group responsible for Pegasus Spyware, and how Israel’s national security state is merging with that of the United States to target free speech and dissent.

closely examines organizations that are in the public interest to know about including intelligence, lobby, and special interest groups influencing policies that infringe on free speech and target dissent. The Watchdog goes against the grain by casting a light on stories largely ignored by the mainstream, corporate media.

For the launch of “The Watchdog,” we examine the idea that Israel, through well-camouflaged proxies, has been making efforts to merge with the U.S.national security state. The podcast delves deep into two organizations we deemed essential to this process of entryism. For this task, we enlisted the help of the prolific writer, researcher into intelligence, surveillance, civil liberties, and big tech on the macro and the micro-level, Whitney Webb.

The first part of the podcast focuses on the IDF Unit 8200, a military intelligence unit in the Israeli Army known for monitoring Palestinian communication and using that information to blackmail them. The unit has also carried out cyber attacks on other states. Unit 8200 gave birth to the NSO Group, the supposedly private company responsible for the Pegasus Spyware which has recently been used around the world to target dissidents, journalists, activists, and more. The lesson which must come from this global scandal is that companies with any Unit 8200 involvement must be seriously examined.

The NSO group is far from the only way in which Unit 8200 actors have been able to insinuate themselves into the business of other governments. Following a 2012 policy set by the Benjamin Netanyahu government, Israel set about siphoning the functions of its military intelligence into private companies. Former Unit 8200 members set up staff and numerous important cybersecurity companies across the world, tasked with guarding swathes of very sensitive data.

Whitney Webb explores her research by looking at Unit 8200 founded and-or staffed organizations like Cybereason, National Start-up Central, and Cyber Threat Intelligence League which between them have access to masses of information in both the U.S. and UK. Lowkey draws a connection between Cybereason, their partner Leidos and the 2012 British census. He also delves into the recently widely referenced cybersecurity company Proofpoint, identifying for the first time the connection between this company and Unit 8200.

This information is visible to both former and current employees of the Israeli government leads to a power imbalance which is allowing Israel to not only prevent any possibility of Boycott Divestment and Sanctions being practiced in the most vital sectors but also helps to create a binational security state entrenched with its interests.

The second organization discussed as a key part of Israel’s entryism into the U.S. security state is the Anti-Defamation League. Webb reveals some of the context around the founding of the organization over a century ago and details of its trajectory to today. Lowkey pointed out that an internal FBI memo in 1969 had questioned whether the ADL violated U.S. law by failing to register a foreign agent and asserted that it would be “incredible” to assume it was not being furnished by the Israeli government in its infiltration activities targeting Arab-American student groups.

Webb defined the ADL as “an intelligence agency posing as a civil rights organization.” She also added to Lowkey’s point that it had not only spied on Arab-American student groups but also groups like Greenpeace and those that were working to end apartheid in South Africa, they were sending information they got from these infiltrations to Mossad and the Apartheid regime.

Today, the ADL is not only designated as a “trusted-flagger” by Youtube but it also has been seen to use social media posts to report people to the FBI. The ADL’s collaboration with the FBI started small in the civil rights era and has now developed to the point that the ADL is now the largest nongovernmental trainer of law enforcement in the U.S. It has been made clear that in Biden’s new Domestic Homeland Security policy arrangement, individuals are being flagged by the ADL, who are then directing the FBI to investigate them.

The reasons for investigation as potential domestic terrorists can be as simple as an individual’s social media history. Lowkey points to the ADL campaigns against Ilhan Omar, Marc Lamont Hill, and Linda Sarsour and Webb describe the organization “as an arm of the Israel Lobby.”

These two organizations must be studied critically if we are to understand the way Israel projects its power into other places, particularly in the United States of America.

0 thoughts on “Lowkey: Israel’s Entryism and the Campaign to Create a Binational Security State”