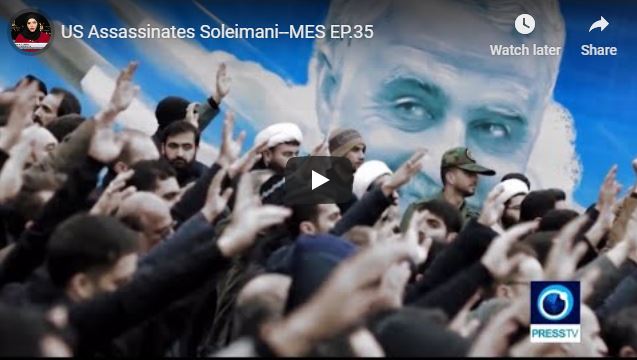 The United States assassinated last week the most important symbol of the Axis of Resistance and its most effective operational strategist in the region.

It’s impossible to exaggerate the influence wielded by martyr Qassem Soleimani in the 22 years he commanded the Iranian Revolutionary Guards’ Quds Force. This is by all means a declaration of war against the Islamic republic of Iran and its region allies in the Axis of Resistance. We duscuss this segment with Joaquin Flores, editor at FortTuss News website.

The first casualty of the assassination of Iranian general Qassem Soleimani is diplomacy. Specifically, the prospects of an American-Iranian dialogue to lessen tensions, define regional red lines and return to the negotiating table on the nuclear agreement (JCPOA) are now dimmer than they have been since 2016.

More importantly, the US has just punched the Axis of Resistance in the face, and the blowback will be grave. We discuss this segment with Motaz Al Wehwah, lecturer in Islamic Studies

The Deeper Story Behind the Assassination of Soleimani

0 thoughts on “US Assassinates Soleimani–MES EP.35”