HOME / WORLD / The deal of the century 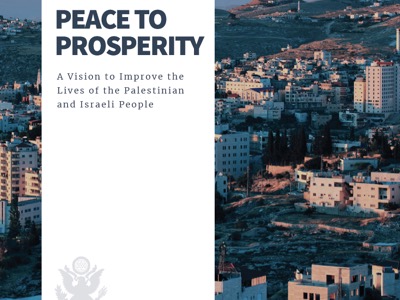 The document released this week by the White House, Peace to Prosperity, should be taken for what it is: a proposal to work on a new basis, not a definitive peace plan. For Thierry Meyssan, instead of protesting against this project, it must be examined. It is an opportunity to unblock a situation that has been rotting for three quarters of a century.

When the foundations of international law were laid in 1899 at the Hague Conference, the aim was to prevent wars between states by means of arbitration. When the British Empire decolonized Mandate Palestine and the Arab-Israeli conflict erupted, international law was of no recourse because there was neither a Palestinian nor a Jewish state. So they tinkered with incoherent rules that we, wrongly, consider to be immutable.

The principles that the founding states of the United Nations, including Syria, drew up in the plan for the partition of Palestine were rejected by both sides. When the Yishuv unilaterally proclaimed the State of Israel and immediately carried out extensive ethnic cleansing (the Nakba), the UN recognized the new state, but sent Count Folke Bernadotte to verify the reality on the spot. He noted Israel’s crimes, advocated limiting by two thirds the territory allocated to the Yishuv, but was assassinated by the Lehi of Yitzhak Shamir, before he could present his report in New York. More than 700 General Assembly resolutions and more than 100 Security Council resolutions later, the conflict had escalated and no solution was in sight.

President Trump had imagined that he would be able to square the circle before the end of his mandate. As soon as he was elected, he was mistakenly considered pro-Israel when he is just a New World businessman.

He started from the following observation: Israel ethnically cleansed the territory it self-allocated in 1948. It fought the 1967 war, which it won.

The Palestinians fought the 1970 war with Jordan, the 1973 war with Israel, the 1975 war with Lebanon, the 1990 war with Kuwait, and the 2012 war with Syria, all of which they lost. But neither group intends to assume the consequences of its actions.

The debate has been distorted since Yasser Arafat, refusing to be marginalized by the Madrid process, abandoned the project of a binational State based on equality between Arabs and Jews and violated the 1948 partition plan by signing the Oslo Accords. The principle of the “two-state solution”, devised by Yitzhak Rabin, the former ally of the South African apartheid regime, is nothing more than the creation of Palestinian Bantustans, an extension of what President Jimmy Carter called “Israeli apartheid”.

Trump has therefore devised a peace plan that he has begun to implement silently over the past two years.

On December 6, 2017, he recognized Jerusalem as the capital of Israel, without specifying its borders, hoping in vain that the Palestinian Authority would move from Ramallah to East Jerusalem.

He withdrew US funding from UNRWA in order to force the international community to stop sponsoring the status quo. This provoked the fury of the Palestinian Authority and severed diplomatic relations between Ramallah and Washington. As heir to the people who had stolen the land from the Indians, he recognized Israel’s conquest of the Syrian Golan, hoping to open negotiations with Damascus, but reaping only the condemnation of 193 States.

He secretly negotiated an agreement between Israel and Hamas that led to the payment of Gaza officials by Qatar.

The document published by the White House this week is presented by its authors as unenforceable because it does not have the support of both parties (page 10). It presents a process in four years, that is to say during the next US presidential term. It is therefore a document for electoral use in the United States, not a final peace plan.

Rather than whining and denouncing a fait accompli, we need to understand where the White House is going, especially since we reject Israeli sovereignty over the Golan Heights.

Donald Trump is a businessman who has put an unacceptable plan on the table in order to achieve much less, but to achieve peace. He is a disciple of President Andrew Jackson who substituted negotiation for war with the Indians. Certainly, the agreement he signed with the Cherokees was sabotaged by his own army and gave rise to the atrocious episode of the Valley of Tears. But today, the Cherokees are the only Native American people to have survived European immigration as such.

The publication of this document was also a trap into which Benjamin Netanyahu fell headlong. Without waiting, the Israeli Prime Minister loudly welcomed the plan in order to eclipse his competitor, General Beny Gantz. Netanyahu had cause to regret this. All the Arab League states stood united, including Qatar, which is secretly participating in the plan. The years of Israel’s efforts to break the Arab front by relying on Saudi Arabia, Qatar, Jordan and Oman have been wiped out.

0 thoughts on “The deal of the century”