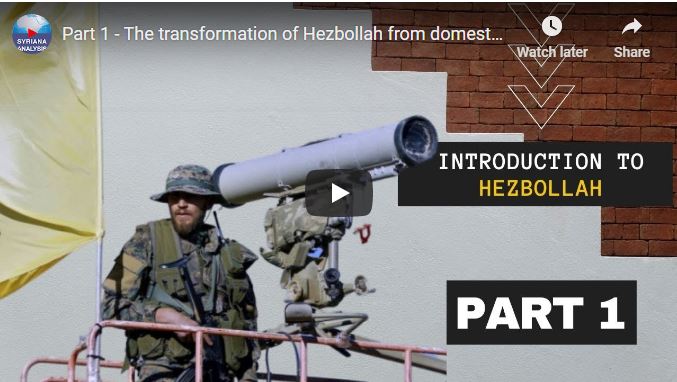 Hezbollah which literally means the Party of God is a Shia Islamic political party and militant group based in Lebanon. Hezbollah’s paramilitary wing is the Jihad Council, and its political wing is the Loyalty to the Resistance Bloc party in the Lebanese parliament with 13 seats out of 128. Hezbollah together with its allies on top of which is the largest Christian Maronite bloc in the country, the Free Patriotic Movement, won at least 70 of the parliament’s 128 seats in the last election.

Since the assassination of Abbas al-Musawi by Israel in 1992, the group has been headed by Hassan Nasrallah, its Secretary-General.

Hezbollah was founded in 1985, three years after the Israeli invasion of Lebanon in 1982.

Hezbollah’s 1985 manifesto listed its objectives as expelling American, French and any of their allied forces from Lebanon and putting an end to any occupation or colonialist power on the Lebanese land. Hezbollah also vowed to punish the Israeli agents in Lebanon, particularly the right-wing infamous Christian Phalangists, who committed horrendous crimes against Muslims and Christians alike.

Hezbollah has engaged in guerilla warfare against the Israeli occupation army in south Lebanon, and as a result, Israel was forced to leave Lebanon on May 25th 2000, and the South Lebanon Army, which was a pro-Israeli militia, collapsed and surrendered. Consequently, Hezbollah liberated hundreds of Lebanese prisoners from the Israeli detention centers and Lebanon officially celebrates this day as the day of Resistance and Liberation.

Hezbollah considered Syria and Iran partners in the victory for their consistent political and military support, which enabled the Lebanese militant group to resist and push back the occupation army.

Hezbollah’s military strength has grown significantly since 2000 and its paramilitary wing is considered more powerful than the Lebanese Army. The main reason for this situation is because the US, France, the UK and their allies in the region either do not sell sophisticated weapons to the Lebanese army or ask the latter to sign written accords that bans the use of the weaponry against Israel, even if Israel attacks Lebanon.

On the other hand, Iran offered all sorts of weapons to the Lebanese army but the pro-American block in the Lebanese parliament, namely the 14 of March coalition, vetoed the matter.

Hezbollah demanded the release of Lebanese detainees held by Israel in exchange for the release of the abducted soldiers. Israel refused and responded with airstrikes and artillery fire and launched an all-out war against Lebanon bombing Lebanese towns, villages and infrastructure, including the civilian airport in Beirut, but made little headway in ground operations.

Hezbollah engaged in a 33-day war, firing a hail of rockets into Israel and destroying many Israeli tanks.

The conflict is believed to have killed between 1,200 and 1,300 Lebanese people and 165 Israelis. It severely damaged Lebanese civil infrastructure and displaced approximately one million Lebanese and 300,000–500,000 Israelis.

On August 11, 2006, the United Nations Security Council unanimously approved resolution 1701 in an effort to end the hostilities. The resolution was approved by both the Lebanese and Israeli governments the following day. Israeli occupation forces withdrew from the Lebanese territories they invaded by during the war by October 2006.

According to the Israeli Winograd Commission report, the 2006 July war was regarded as a “missed opportunity” and that “Israel initiated a long war, which ended without a defined military victory”.

The report continued to state that “a semi-military organization of a few thousand men resisted, for a few weeks, the strongest army in the Middle East, which enjoyed full air superiority, size and technology advantages.”

On the other hand, Hezbollah and its allies said this war “shattered the myth of the invincibility of the Israeli army”.

In 2012, after a year to the proxy war in Syria, Hezbollah waged a war against the radical Islamist armed groups occupying the borders between Syria and Lebanon. And as such, Hezbollah officially joined the Syrian war and expanded its role later to fighting ISIS and Al-Nusra terrorists. It is worth mentioning that Hezbollah liberated many Christian towns and villages in Syria, and therefore, the Lebanese group boosted its reputation among the Christians of the Middle East but lost some of its popular support among the Sunni Muslims, who chose to support the radicals in Syria.

Hezbollah which is considered a terrorist organization by the US and recently by Germany is no more the small domestic group of the 1980s and it is not only a paramilitary group fighting against the Israeli occupation army. It is rather a regional power, which extended its influence to Gaza, Lebanon, Syria, Iraq and Yemen.

Militarily, Hezbollah acquired valuable fighting experience while taking part in the war against terrorism in Syria. The group has learned offensive tactics, whereas in past wars it had been arrayed mostly in a defensive posture against Israeli troops.

Consequently, there is grave concern within the decision-making circles in Israel about the possibility of any war with Lebanon, which will certainly lead to a military confrontation with an enemy who has been fighting for years against the most ferocious and powerful terrorist organizations in Syria. Therefore, we ask: Will Israel venture into another war against Lebanon or Syria, or will the growing power and experience of Hezbollah deter Tel Aviv?