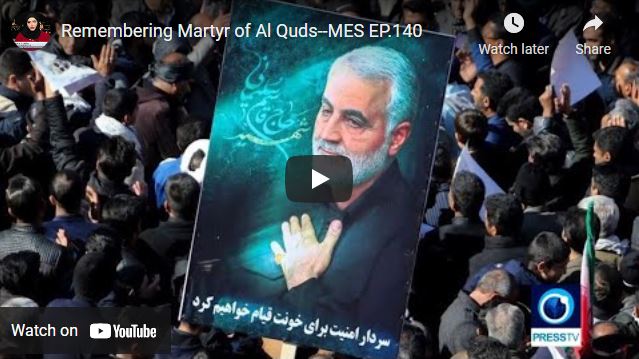 Lt. General Hajj Qassem Soleimani is the martyr of the entire Islamic nation, and the personality of that great martyr must be known to everyone as an influential figure in the Islamic world. Martyr Soleimani’s approach accomplished many achievements in various cultural and social fields, especially in vindicating the personality of this righteous martyr. What would have happened to the region and the world if martyr Soleimani was not present on the battlefields in Syria and Iraq? The efforts of martyr Soleimani were focused on both conventional and soft war. Martyr Soleimani’s jihad and resistance, confronting terrorism, and saving the lives of Muslims and Christians from the Takfiri terrorists’ knives will never be erased from the pages of history. As will his support to the oppressed Palestinian people, his fight against the Zionist occupation and Takfiri terrorists in Syria and Iraq, and his support for Yemen, which all fall within the framework of his support for the natives’ rights for resistance in the face of foreign occupation and aggression.

To discuss this issue with us from Beirut is Dr. Yehya Ghaddar, secretary general of the Global Gathering in Support of the Choice of Resistance.

Former head of the Zionist Israeli Military Intelligence Division, Tamir Hayman, revealed that the Mossad played a vital role in the assassination of the former commander of the IRGC’s Quds Force, Lieutenant-General Qassem Soleimani, according to a report published by a magazine closely affiliated with Israel’s intelligence services. According to the report, Hayman indicated that his tenure as head of the intelligence division witnessed two important liquidations, one of which was the killing of Commander Soleimani, and the other the leader of the Islamic Jihad movement Baha Abu al-Atta, who was assassinated in November 2019. Heyman, the now-retired general who headed military intelligence until October, appears to be the first official to confirm Israel’s involvement. Something we really never doubted.

To discuss this issue with us from Beirut is Dr. Yehya Ghaddar, secretary general of the Global Gathering in Support of the Choice of Resistance.

If a US national hero was killed, we’d feel like Iran on Soleimani