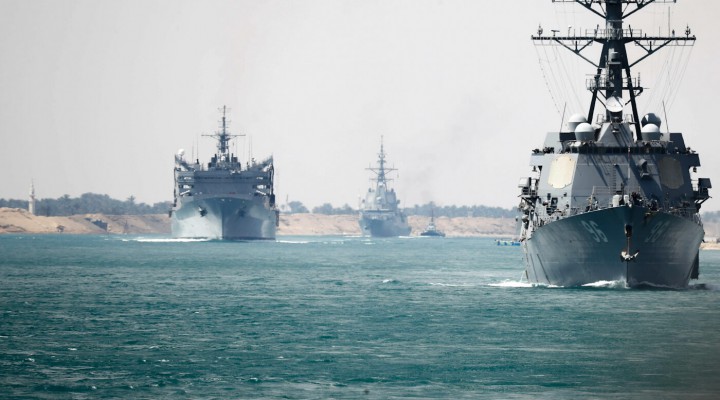 All involved states must be willing to give up some of their policies, ambitions, obsessions and traumas

A Middle Eastern security architecture could be the only option to avoid a major conflict in the region, which has been looming amid renewed tensions in the Gulf. A worrisome, slow-motion war of attrition is already taking place; it is imperative to avoid open escalation.

The previous two articles in this series highlight the basic steps that the US and Israel should take to make this possibility a reality. But other significant global and regional players must also do their part.

Palestinians can do one thing only: become united again. Any eventual, serious negotiation on their rights and future will go nowhere if they continue to allow their Israeli, US and Arab enemies to play into their divisions, or their Iranian supporters to exploit them. The sooner they reconcile, the better.

Major Arab players – mainly Saudi Arabia, the UAE and Egypt – are united by a common distrust towards Iran and its allies, and a benign neglect towards the current packaging of the liquidation of the Palestinian cause through US President Donald Trump’s “deal of the century”. But their legitimate quest for security will not be improved by squeezing Iran into regime change or throwing Palestinians under the bus – but by just the opposite.

The Arab Spring was a warning bell; the fact that it was bloodily crushed does not mean it will not come back in another form

If a major war in the region breaks out, their leaderships risk being fatally crippled, or overwhelmed. They cannot ignore that the US has entered an era of unpredictability. Saudi Arabia should watch carefully the determination of the US Congress to block Trump’s weapons sales to Riyadh; Egypt does not have an eternal guarantee that its brutal internal repression will not trigger a new “Khashoggieffect” in Washington. In other words, an enduring, unwavering support from Washington should not be taken for granted in Arab capitals.

The Arab Spring was a warning bell; the fact that it was bloodily crushed does not mean it will not come back in another form. Arab countries should consider taking back their destiny. Gulf countries have entertained fruitful ties with Iran for centuries; why should they suddenly outsource their security and policy options to external powers?

Qatar should not be isolated, but taken as a model. Gulf states’ lobbying capabilities inside Washington’s Beltway – which have been temporarily effective – cannot last forever. The US is changing, whether or not Trump wins reelection next year.

Iran, after four decades, must give up its revolutionary fervour or its legitimate quest for security, stability and legitimacy will not be achieved. It should abandon its pretence of struggling for every perceived injustice and oppression in the region, be it the Palestinians, the Houthis, or other Shia communities. It must leave behind the trauma of its long war with Iraq, which has contributed significantly to shaping the views of its leadership.

Tehran should progressively drop its siege mentality, under which every regional move masks a regime-change plot. While the Iranian leadership’s belief in a US-Israeli-Arab effort against its revolution is to some extent founded, Iran has reacted accordingly through a forward-looking defence policy, aiming to fight outside its borders via proxies and asymmetric warfare.

Israel – with the deafening silence of the “international community” and the mainstream media – is following the same policy, through its frequent air strikes and special operations beyond its borders, which are now also targeting Iraq. But the Iranian leadership must understand that its own policy is not perceived as defensive by other countries in the region, but as just the opposite.

Russia could contribute significantly to a Middle Eastern security architecture, having shown its will and capability to play difficult hands, as in the case of Syria. It would be ideal if these skills could be used towards an overall stabilisation of the region, assuming Moscow gives up the temptation to settle some enduring scores with the US. Moscow’s recent proposal for a security architecture in the Gulf is a positive development to build upon.

China could also add value to a stabilised Middle East. The Belt and Road Initiative could become for the Middle East what the Marshall Plan was for Europe. The most advanced Arab kingdom, the UAE – notwithstanding its strong bond with Washington – is already organising to welcome Chinese investments.

The European Union’s added value will come not from an alignment with the US, but only by providing a balancing role among all players. The EU must rediscover its soft-power superpower status, with Brexit on track to remove one of the main drivers of its disunity. The biggest challenge for Brussels is to avoid falling into the potential trap of a military patrol mission in Gulf waters.

Turkey should abandon its neo-Ottoman drive, as well as its pretence to be the vanguard of political Islam through the Muslim Brotherhood. Too many Arab countries perceive these ambitions as a threat to their stability, and Ankara has more pressing internal priorities, including reconsidering its devouring Kurdish obsession, which constantly destabilises the heart of the Middle East (Syria and Iraq).

Turkey could act – ideally alongside the EU – as a further balancer among the opposing parties in the region, especially when it comes to curbing Israel and Iran’s baser instincts.

To fulfil the Middle Eastern security architecture, all involved players must give up some of their policies, ambitions, obsessions and traumas. If this happens, progressively and by default, the sketches of a comprehensive security architecture will slowly take shape.

For more than a century, the constant meddling of external powers in the area has produced only disaster

A permanent conference could be a tool to oversee its gestation, which will likely require years instead of months, while a contact group comprising the major players could be its steering committee. No grand designs or schemes are required; if the main stumbling blocks can be overcome through reciprocal renunciations, then a smart fine-tuning through confidence-building measures, alongside security and economic regional cooperation agreements, which could consolidate the main pillars of the security architecture. The rest would follow.

And this follow-up should ideally be left to the countries of the region. For more than a century, the constant meddling of external powers in the area has produced only disaster.

This is the third in a series of three articles.

0 thoughts on “Why we need a Middle Eastern security architecture: Part III”