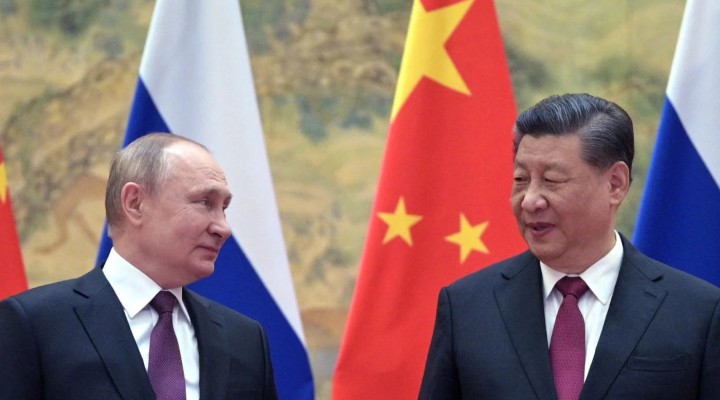 As the West continues pushing its tired democracy-versus-autocracy narrative, countries of the Middle East are relishing the prospect of a new era of alternatives

America, the last ideological empire, is attempting the impossible: containing two great countries at the same time. This is not its first attempt. The US tried to contain both Iran and Iraq for three decades, and neither case ended well. Iran was not contained, and Iraq’s regime was changed but the country itself was lost.

Now, at a time when the US has never been so weak abroad and so polarised at home, its ambitions – undaunted by serial failure – have never been so large. It aims to contain both Russia and China.

Henry Kissinger recently summarised how dangerous this is: “We are at the edge of war with Russia and China on issues which we partly created, without any concept of how this is going to end or what it’s supposed to lead to.”

The war in Ukraine and rising tensions over Taiwan are the focal points of this renewed effort, which has serious implications: global energy and food crises caused by sanctions on Russia, supply-chain disruptions, trade tensions and a technological race, all accompanied by a looming recession and stagflation.

Moscow and Beijing are both accused of breaking the rules-based world order. The evidence, however, is not compelling.

This confrontation may yet trigger a global realignment – ideally a genuinely multipolar system, but most probably a tripolar one. The first pole is the US-led western democratic bloc, epitomised by the G7–Nato–EU triad – a new holy alliance.

The second is the Eurasian bloc led by China and Russia, along with Iran and some Central Asian republics. The third bloc will consist of those who want to keep their distance from both – the rest of the world, now called the Global South. It will sit on the fence as democracy slogs it out with autocracy in Cold War 2.0.

Battle for hearts and minds

The Global South is freeing itself from decades of western political, economic and financial tutelage. This does not imply an automatic alignment with the Eurasian bloc, but it certainly points to a more fluid international system. As the Ukraine war indicates, the West’s global rallying cry against Russia is not so appealing. The forthcoming one against China will be even less so.

The western triad is struggling to win hearts and minds in the Global South, but its die-hard double standards and twisted rules-based world order are irritating – far more so than Russian atrocities in Ukraine or China’s assertiveness along its own borders.

So far, non-western political formats such as Brics (Brazil, Russia, India, China and South Africa) and the Shanghai Cooperation Organisation (SCO) seem more appealing. Western democracies are only winning over like-minded states among their own flock, as evidenced by Sweden and Finland joining Nato. Other regional players – including Turkey, Algeria, Egypt, Saudi Arabia, the UAE, Argentina and Mexico – are looking elsewhere.

A senior British diplomat once told me: “Being friends with the United States is much more difficult than being its enemy.” Thus, two competing economic and trade blocs could emerge; New York, London and the US dollar may no longer be the exclusive headquarters and tools of the world’s financial system.

China and Russia are working on alternatives to the US dollar, the Swift worldwide payment system, and the New York and London stock exchanges. China’s state-owned enterprises are delisting from US exchanges, while Beijing is reducing the US Treasury bonds it owns. These moves are still embryonic, but in due course they could become attractive for many Global Southerners – especially if the West perseveres in stupidly weaponising the dollar and its financial primacy.

More and more states could also start looking for safer places for their gold and hard currency reserves, especially after the respective seizure by the US and UK of Afghan and Venezuelan national reserves, not to mention the unprecedented seizure of $300bn from Russia by western states.

Russia’s advanced economic decoupling from the West, and China’s forthcoming one, could present a very different landscape. How will the Middle East fit into these tectonic shifts?

With the number of arms that were twisted to produce the Abraham Accords, Pax Americana is becoming more and more elusive. The deals, promoted by the Trump administration and confirmed by US President Joe Biden, are important economically, particularly for Israel. But they are based upon two historically flawed assumptions: that the Palestinian question can be indefinitely set aside without consequences, and that public opinion in the Arab world is irrelevant.

It will soon be decision time for the major regional powers. Will the region let itself again become a battleground for the great powers, as it was during the 20th century? Around which political template, if any, could its regional stability be built: enlarged US-brokered Abraham Accords; anti-western informal understandings such as the Axis of Resistance (Iran-Iraq-Syria–Hezbollah); or non-western groupings such as Brics-plus and the SCO?

Will the region’s economic framework lean more towards China’s trillion-dollar Belt and Road Initiative, or the newly announced G7 Partnership for Global Infrastructure and Investment, worth $600bn? Will financial facilities continue to rely upon the US-controlled World Bank and International Monetary Fund, or will they find an alternative in China’s Asian Infrastructure Investment Bank?

The only evidence available so far is that traditional US Middle Eastern partners, such as Egypt and Saudi Arabia, are considering joining Brics. Riyadh has been mulling accepting the yuan instead of the dollar for oil sales, and Chinese President Xi Jinping is expected to visit Saudi Arabia soon. Comparing the courtesies extended to Xi versus those recently granted to Biden will be telling; in the Arab world, form is still substance.

Despite an evolving global landscape, the US blueprint for the Middle East has unfortunately not changed. Biden’s recent trip to Israel/Palestine and Saudi Arabia was no exception. Israel secured a strategic partnership with the US mainly aimed at countering Iran, while the Palestinians received another heap of mothballs atop their legitimate aspirations for self-determination.

But the most important stop was in Saudi Arabia. Since the murder of journalist Jamal Khashoggi, the US-Saudi relationship has been seeking a reset. The row confirmed the inherent difficulties of a foreign policy based exclusively on ethical principles and values.

Biden’s grand narrative of a global clash between democracies and autocracies has completely collapsed with regard to the Middle East. Realpolitik has imposed its own priorities. The US president has faced a stark dilemma: sticking to his own claimed moral values, which would demand that the man who ordered Khashoggi’s murder remain an international pariah, or prioritising US consumers by attempting to reduce oil prices.

Unsurprisingly, Biden opted for the second. Soaring inflation has been eroding both the American consumer’s purchasing power and the Democratic Party’s chances in November’s midterm elections. The quickest fix would be to flood the oil market with crude.

It is now abundantly clear that while Biden could not spare himself the humiliating fist-bump with Saudi Crown Prince Mohammed bin Salman, Riyadh has not committed to any oil output increase, saying its spare capacity is close to the limit. In a nutshell, the visit was a political disaster.

The almost parallel Iran-Russia-Turkey tripartite summit in Tehran could have far more important and lasting implications for the region. While the US is still held hostage to an obsolete playbook and the EU has lost its relevance, Russia and China could have greater room to manoeuvre.

Despite the West’s attempts to structure the international system along rigid us-versus-them logic, the emerging reality is far more complex. The countries of the Middle East, including traditional US allies, are relishing the prospect of a brand new world order, where plenty of new options could be at their disposal.

llusions of Superiority. What’s Next?