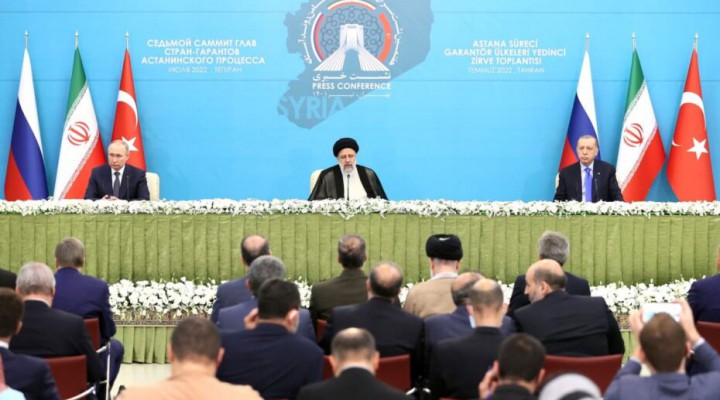 NAM 2.0 drive – of which China is a key player – stands in stark opposition to how the Empire of Chaos – and Lies – wove its toxic net, via the war on terror, since the start of the millennium.

Those were the days, in 1955, at the legendary Bandung conference in Indonesia, when the newly emancipated Global South started dreaming of building a new world, via what became configured later in 1961 in Belgrade as the Non-Aligned Movement (NAM).

The Empire of Chaos – and Lies – would never allow a starring role for NAM. So it played dirty: everything from hardcore subversion and bribing to military coups and proto-color revolutions.

Yet now, the Spirit of Bandung lives again, via a sort of NAM 2.0 on steroids: a Newly Aligned Movement, with the leaders of Eurasian integration at the vanguard.

We just had a taste of which way the geopolitical wind is blowing at the gathering of a new power troika in Tehran. Unlike Stalin, Roosevelt and Churchill in 1943, Putin, Raisi and Erdogan did not meet to carve up the world. They met essentially to discuss how another world is possible – through bilaterals, trilaterals, multilaterals and an enhanced role for an array of relatively new geopolitical and geoeconomic institutions.

Russia – and China – have been on the forefront of all recent key decisions. Their diplomacy has brought Iran to join the SCO as a full member. Their pull is attracting key Global South players to join BRICS+. Russia has all but convinced Turkey to join BRICS+, the SCO and the EAEU, and facilitated the re-approximation of Tehran and Ankara as well as Tehran and Riyadh. Russia has largely influenced the remake/remodel process across West Asia.

This NAM 2.0 drive – of which China is a key player – stands in stark opposition to how the Empire of Chaos – and Lies – wove its toxic net, via the war on terror, since the start of the millennium. The Empire tried to subdue what it described as MENA (Middle East-Northern Africa) on the basis of two invasions/occupations (Afghanistan-Iraq); a total devastation (Libya); and a protracted proxy war (Syria). All eventually failed.

And that brings us to the stunning contrast between these two foreign policy approaches, graphically illustrated by the spectacular failure of the teleprompter-reading “leader of the free world” in his visit to Jeddah – he was not even allowed to go to Riyadh – compared to Putin’s performance in Tehran.

Not only we are witnessing the lineaments of a Russia/Iran/Turkey informal alliance; we are witnessing the alliance reading a soft riot act to the Empire: leave Syria, before you suffer yet another humiliation. And with a Kurd-directed corollary: keep away from the Americans and recognize the authority of Damascus before it’s too late.

Ankara could never admit it in public, but the fact is Sultan Erdogan – as much against US troops in Syria as Putin and Raisi – even seems to have swiftly calibrated his previous designs on Syrian sovereign territory.

The much-debated Turkish military operation in northern Syria in the end may be restricted to taming the YPG Kurds. The heart of the action will in fact revolve around how the Russia/Iran/Turkey/Syria alliance will make like impossible for Americans stealing Syrian oil.

As Russia is now on “take no prisoners” mode when facing the collective West – the mantra in every intervention by Putin, Lavrov, Medvedev, Patrushev – and on top of it firmly aligned with China and Iran, it’s inevitable that every other player across West Asia and beyond is giving undivided attention to the new game in town.

Interconnecting West Asia and Central Asia, the Caspian Sea has finally reached the geopolitical and geoeconomic limelight – complete with the groundbreaking consensus reached by the five littoral states at the Caspian Summit in late June to officially ban NATO from these waters.

Moreover, the leadership in Tehran in no time realized how the Caspian is the perfect, cost-conscious corridor from Iran to the heart of Russia along the Volga.

So it’s no wonder that Putin himself, in Tehran, proposed the construction of a key stretch of highway on the St Petersburg-Persian Gulf route, much to the delight of the Iranians. Cue to the nostalgic Great Game crowd in that former “rule the waves” island getting serial heart attacks: they could never imagine the Russian “empire” finally having full access to the warm waters of the Persian Gulf.

So we’re back to the absolutely crucial re-engineering of the International North South Transportation Corridor (INTSC) – which will play for Russia and Iran a parallel role the Belt and Road Initiative (BRI) plays for China. In both cases, it’s all about multimodal Eurasia-wide trade and development corridors immune from interference by the imperial Navy.

And here we see the renewed importance of the hyper-strategic liberation of Mariupol and Kherson by the Russian and DPR forces. The Sea of Azov is now configured as a de facto Russian lake – and the same will eventually happen to what is bound to remain of the (currently Ukrainian) Black Sea coast, Odessa included.

So we have the ultra-strategic Caspian-Black Sea maritime corridor – via the Volga-Don canal – seamlessly connected to the Black Sea-Mediterranean, and up north, all the way to the Baltic and the fast developing Atlantic-Pacific connector, the Northern Sea Route. Call it the Russian Heartland Water Roads.

The NATO/Five Eyes/Intermarium combo has absolutely nothing to counteract these (overland) facts on the (Heartland) ground except to throw a pile of HIMARS into the Ukrainian black hole. And of course, keep de-industrializing Europe. In contrast, those across the Global South with a keen sense of history – as in the grand debate of ideas in a Hegelian sense – and also versed in geography and trade relations are busy getting ready to hit (and profit from) the new groove.

Have strategic ambiguity, will travel

As much as it’s a blast to survey all the instances of Russia playing strategic ambiguity to levels capable of baffling the entire, bloated “Western intel” apparatus, what is coming to the forefront is how Putin – and Patrushev – are now willfully turning up the pain dial to tactically exhaust not only the Ukrainian black hole but the whole of NATOstan.

Western governments are collapsing. Sanctions are being ditched – practically in secret. A Deep Freeze winter is a given. And then there’s the incoming economic/financial crisis, the Definitive Monster from Hell, as Martin Armstrong has made it quite clear: “There is no way they can get out of this other than default. If they default, they are worried about millions of people storming the parliaments of Europe…This is really a tremendous financial crisis that we are facing. They have been borrowing year after year since WWII with zero intention of paying anything back.”

Meanwhile, Moscow may be revving up the turbines to launch – this coming Fall? In the middle of Winter? Next Spring? – a multi-spectrum Mother of All Offensives, capitalizing on a rolling series of interconnected strategies that have already rendered dazed and confused every NATOstan “analyst” in sight.

That would explain Putin looking like he’s cheerfully whistling JJ Cale’s Call Me the Breeze in most of his public appearances. In his crucial intervention at the Strong Ideas for a New Time forum, he enthusiastically promoted the advent of “truly revolutionary” and “enormous” changes that would lead to the creation of a new, “harmonious, fairer and more community-focused and safe” world order.

Yet that’s not for everyone: “only truly sovereign states can ensure high growth dynamics.” What that implies is that the unipolar world order, followed by states in the collective West which are hardly sovereign, is condemned to fail, as it’s “becoming a brake on the development of our civilization.”

Only a self-confident sovereign who does not expect anything constructive from the collective West can get away with describing it as “racist and neo-colonial”, bearing an ideology that “is becoming increasingly more like totalitarianism.” In the old NAM days these words would be met with an assassination.

So will the “rules-based international order” be preserved? Not a chance, argues Putin: the changes are “irreversible.” For those about to rock, NAM 2.0 salutes you.

2 thoughts on “For Those About to Rock, NAM 2.0 Salutes You”