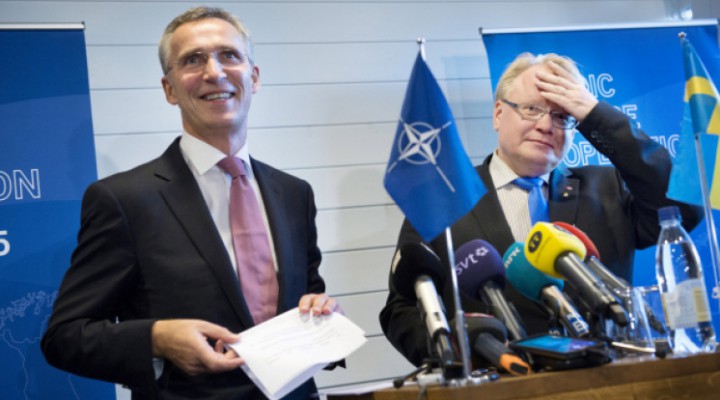 Unlike Finland, Sweden does not have a common border with Russia, so the entry of this country into the North Atlantic Alliance may not be perceived as too much problematic. On the other hand, any strengthening of NATO is a challenge, since this bloc itself is a threat to Russia and Belarus (and not only).

Sweden’s neutrality is questionable. To figure this out, just look at the official statistics of NATO.

Sweden is one of six countries (known as “Enhanced Opportunity Partners” under the Partnership Interoperability Initiative) that make particularly significant contributions to NATO operations and other Alliance objectives. Thus, the country has expanded opportunities for dialogue and cooperation with its allies.

There is now regular political dialogue and consultations between NATO and Sweden; information exchange on hybrid warfare; coordination of training and exercises; and raising general awareness of the situation to eliminate common threats and develop joint actions, if necessary.

Swedish personnel worked alongside NATO forces as part of the International Security Assistance Force (ISAF) in Afghanistan from 2003 until the end of the ISAF mission in 2014. Sweden has also supported a follow-up Resolute Support Mission (RSM) to further train, assist and advise Afghan security forces and institutions until its completion in September 2021. Sweden has contributed more than $13 million to the Afghan National Army Trust Fund.

In April 2011, Sweden contributed to Operation United Protector (OUP), a NATO military operation in Libya in accordance with UN Security Council resolutions of 1970 and 1973. Sweden is also participating in the NATO Mission in Iraq.

In addition, Sweden has signed a Memorandum of Understanding to support the host country, which, subject to a national decision, allows it to provide logistical support to allied troops located on its territory or transiting through it, during exercises or in a crisis. [i]

Sweden also supports a number of projects of the NATO Trust Fund in other partner countries focused on such areas as training and evaluation of military units; medical rehabilitation of wounded servicemen; explosive ordnance disposal and countering improvised explosive devices; advanced training of security sector personnel.

Sweden participates in the Planning and Analysis Process, which helps the country to develop its military potential and improve the interoperability of the Swedish Armed Forces with allies and other partners.

Sweden has been cooperating with a number of other countries in the creation of a multinational rapid reaction force for peacekeeping operations led by the European Union (EU).

Sweden has close ties with other Nordic countries and participates in the Nordic Defence Cooperation (NORDEFCO), a regional defence initiative that promotes cooperation between the Nordic armed forces.

In other words, cooperation between Sweden and NATO has been very active for a long time. And Stockholm helped NATO in every possible way to carry out military aggression in other countries.

It should be noted that a broad debate about the possibility of Sweden joining NATO began at the end of December 2012, when the head of Swedish defence, General Sverker Göranson, said in a widely distributed interview that if Sweden is attacked, it would be able to defend itself only for one week before foreign assistance is required.

NATO Secretary General Anders Fogh Rasmussen later added that although Sweden is the most active and most capable partner of NATO, it cannot count on assistance in the event of an attack, since the security guarantee provided for in Article 5 of the Alliance applies only to members of NATO, an organisation that Sweden refuses to join.

But Swedish Defence Minister Karin Enström said in a later interview that Sweden can count on EU assistance, since the Lisbon Treaty provides for a solidarity clause, article 42.7, obliging EU member states to provide assistance to other EU members in the event of catastrophic events or attacks. [ii]

Naturally, in 2014, after the situation with Crimea, the United States began actively inciting Sweden to join NATO. [iii] Among other things, statements about possible “aggression of Moscow” were actively replicated. American experts believe that “in the conflict between NATO and Russia, for example, during the Russian invasion of the Baltic states, Sweden will be deeply involved. Since Finland acts as a buffer against Russia, an attack from land is extremely unlikely.

Instead, Sweden will face three defensive tasks: protection from Russian air and missile attacks, protection of its vast territory from Russian penetration, and protection of the island of Gotland and other key infrastructure so that NATO armed forces can use them to protect the entry of troops into the Baltic states and other places”. To do this, there is need to pre-deploy aircraft and air defence systems to cover Gotland and a number of positions in Sweden. It will cost the United States 3.2 billion, and NATO will need to add another 6.4 billion. [iv]

The number of supporters of the country’s accession to NATO in Sweden has steadily grown from year to year. If 10 years ago, in 2012, polls showed that only 18% believed that they should become a member of the alliance, and 44% were against, then in 2015 38% were in favour, and 31% were against.

It was not only external propagandists and their agents like Carl Bildt who worked on the image of NATO. Many Swedish international scholars have contributed to the pro-NATO discourse. They argued that the identity change discussed in the introduction became possible by appealing to the dominant discourses of “idealism” and “active internationalism”.

Once an integral part of Sweden’s national identity, the theme of “neutrality” has been replaced by justification for the continued existence and expansion of NATO in the post-Cold War period. The meaning of “solidarity” also changed and began to imply that states that care about peace should not act as “stowaways”, but should be ready to act in solidarity with other European and democratic states against tyrants and terrorists. [v]

Already in 2015, active cooperation between NATO, Sweden and Finland was seen in Stockholm as a kind of new norm necessary for security in the Baltics. [vi] Although before that, in practice, Sweden effectively used informal bilateral cooperation with the United States and other European states to ensure its security.

Therefore, the myth of the country’s “armed neutrality” policy during the Cold War did not become a key obstacle to gaining public support for joining NATO.

Like in neighbouring Finland, panic rumours and Russophobic sentiments have been spreading in Sweden lately. Gunilla Herolf from the Swedish Institute of International Relations told The National that “the Russians will not respect the territory of Sweden. They will make sure that on the first day we will not be able to use credit cards or have electricity. This is what people expect and prepare for.” [vii]

According to her, the Swedes buy special water tanks, hand-held radios, camping stoves and extra food in case of conflict. The Swedish government is also making plans to replenish the large Vattenfall oil reservoir and use a power plant built during the Cold War.

Herolf also believes that the island of Gotland, which was militarised again a few years ago, will serve as a support base for “deterring the Russians”. Or, perhaps, provocations and attacks?

Recently, in December 2021, Sweden took part in cyber manoeuvres under the auspices of NATO. [viii] And in March-April of this year, VIKING 22 military exercises took place on the territory of Sweden, where representatives of Ukraine were also present. In February 2021, the Swedish Ministry of Defence established the Special Operations Research Center, whose leadership included representatives of NATO headquarters and the US Air Force. [ix]

As for the military-industrial complex, the Swedish defence industry has “significant advanced technologies and combat capability”, having strong industrial alliances with the United Kingdom, the United States and Germany. This allowed it to jointly develop systems with the UK, such as the NLAW anti-tank missile, which was used in Ukraine against Russian troops.

The products of the Swedish military-industrial complex are also the Gripen multipurpose military aircraft, advanced electronic warfare systems, aerial surveillance, intelligent artillery and counter-battery radars, and all this will be useful for future NATO allies, presumably against Russia. Therefore, the response measures should represent something more than the standard protest notes and/or the closure of IKEA stores.

One thought on “Sweden in NATO”