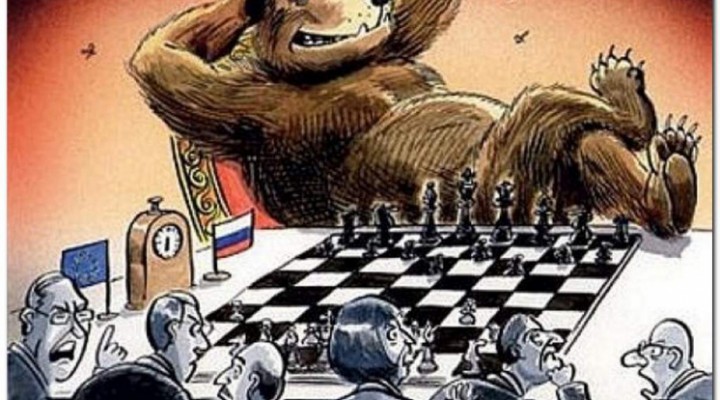 Carl von Clausewitz’s formula that war is the continuation of politics by other means is reinforced in the 21st century by geoeconomics, where supply chains, promising technologies and control over financial and other assets simply compel decisions to be made quickly and to consider the cascading effects that can arise in a complex situation. The special operation in the Ukraine is a good proof of this thesis. If Russia had not launched this operation, Ukrainian troops, supported by NATO, would have launched a massive attack on the Donbass and even the Crimean Peninsula in the very near future. Conflict could not have been avoided, but Russia was ahead of Ukraine and its Western sponsors.

All the while that this situation was brewing, some of Russia’s assets continued to be held in the West. Now they are frozen and will probably be confiscated. It was possible to start withdrawing them back into Russia in December, when proposals on reformatting the European security architecture were sent from the Russian side to the United States and NATO. However, this was not done. It is difficult to imagine the collective West would have approved the Russian operation in Ukraine; or at the least stayed away. Signals of support for Kiev (and, consequently, indirect threats against Moscow) had been coming from Washington and Brussels for the past eight years. Russia’s armed forces were quite prepared; but it must be admitted that on some issues Russia was too late. And now it has to make up for lost time, which is much more difficult in the current circumstances.

Such procrastination is not unique to Russia. Many states, both in the West and in other parts of the world, often suffer from inflated expectations, unfulfilled promises from partners, and unfulfilled hopes of the cargo-cult that someone on the outside will solve their problems and make them happy in the very near future. Some political powers rely on their natural resources, which can be valuable and attractive. Others rely on technology, such as El Salvador, which has even converted some of its national reserves into cryptocurrency. Others rely on an exceptional geopolitical position, as in the case of Panama. And the fourth, like many Western countries, on the endless status quo of their own hegemony, which is now rapidly eroding.

The current crisis highlights numerous nuances and allows us to see how other actors act on the basis of their interests and capabilities. India has decided to sharply increase the purchase of Russian oil, taking advantage of huge discounts, which indicates independence in the choice of decisions with a clear political connotation. Some Arab countries are active, reacting flexibly to economic changes, but not taking sides definitively. In ASEAN, they are pragmatically calculating moves, perfectly aware of the growing power of China.

The U.S. is trying to maintain solidarity in NATO and even to extend politico-military mechanisms into the Asian region, closer to the Celestial Empire. The EU countries are floundering, rationally calculating future losses but afraid to take sovereign decisions contrary to U.S. guidelines and the assertions of the Brussels bureaucracy. Britain, it seems, is counting on a long-term confrontation with Russia; so, it is already taking measures for its energy supply. It has decided to abandon the construction of wind turbines, which were planned as a transition to green energy. Instead, new nuclear power plants will be built. It is assumed that up to a quarter of all electricity by 2050 will be produced in nuclear power plants. This decision is logical, since gas supplies from Russia may stop.

But we cannot say that the lack of a visible response is geopolitical procrastination. There is also the factor of strategic culture, as in the case of China. Although analysts and observers in the West have made hasty conclusions about China’s role and function in the conflict between Russia and Ukraine (supported by the West), necessarily pointing to Taiwan as some kind of parallel, this case is much more complex and interesting than it might seem at first glance. The stratagems of Sun Tzu and Wu Tzu are uncomplicated, but they refer to certain historical events, and so in the Chinese mind they are associated with the past. When Western authors tie these or other Chinese stratagems to some current events they make the typical mistake of misperception of Eastern culture, superimposed on their own pride. Chinese strategy is much more multilayered, and the political leaders there are more patient. But their agility is the envy of even the nimblest countries.

The Solomon Islands is a case in point. In 2019, the islands’ leaders severed diplomatic relations with Taiwan. Ties were soon established with China. Parallel to the diplomatic tensions on the islands, the old inter-ethnic conflict flared up again. Since no help was forthcoming from neighboring Australia and New Zealand to fight the insurgency (and the prime minister did appeal to these states), China was chosen as the future protector. The planned treaty between China and the Solomon Islands allowed Chinese ships to call at ports and make logistical replenishments. Australia and New Zealand immediately threw a tantrum, accusing China of establishing a military base near them, although there is no such provision in the draft treaty.

But if we are talking about the confrontation between Russia and the West, what is urgent now is to completely cut off deliveries to unfriendly countries of those products that are critical to their industries or are involved in production chains. Why go into geopolitical procrastination and wait until they themselves find an alternative solution and arrogantly impose new sanctions on these products? It is better to be proactive. Russia is not as consumer-centric as the West; so temporary restrictions will not pose a threat to Russian statehood. On the contrary, it will help to mobilize and consolidate the people and the authorities in the face of external challenges.

China – the Belt and Road Initiative, History and relevance to Humanity today – with Matt Ehret

Has Putin Miscalculated? | With Pepe Escobar