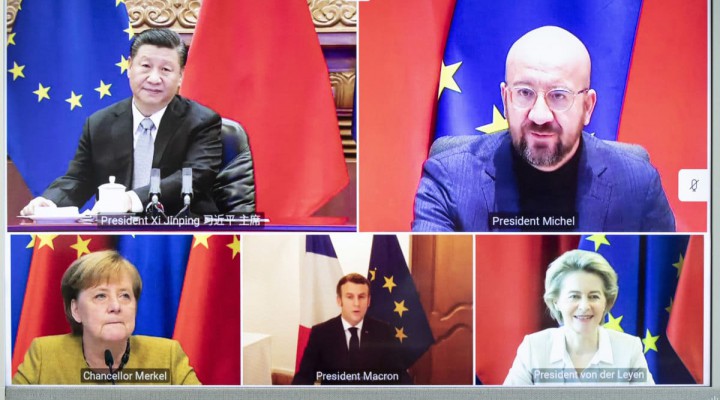 In April 2021, the EU adopted its Strategy for Cooperation in the Indo-Pacific, which has been signed by the 27 foreign ministers of the EU member states.

The conclusions of the special committee that developed the strategy show that the EU recognises the growing importance of the region and reaffirms its commitment to strengthening its role in cooperation with partners in the region.

The EU’s interest is understandable – the Indo-Pacific region is one of the world’s economic and strategic centres, and it produces 60% of the world’s GDP. By 2030, the overwhelming majority of the world’s 2.4 billion new middle class entering the global economy will live in this region.

The EU also justifies its interests by claiming that cooperation in the Indo-Pacific region is crucial for implementing the international community’s global agenda, including the UN’s Sustainable Development Goals. And here, Brussels mentions humanitarian assistance, tackling climate change, biodiversity loss and pollution, and contributing to upholding international law, including human rights and freedom of navigation.

The strategy also focuses attention on the South China Sea, through which a significant proportion of maritime trade passes.

As it states in the press release from the EU’s European External Action Service (bold theirs): “This is why the EU’s Foreign Ministers have decided to reinforce the EU’s strategic focus, presence and actions in the Indo-Pacific. The approach and engagement will be principled with a long-term perspective, with the aim of contributing to the stability, security, prosperity and sustainable development of the region, based on the promotion of democracy, rule of law, human rights and international law.”

Two things are immediately noticeable in this approach.

First, the EU is copying the “Indo-Pacific region” narrative of the US, which previously adopted a similar strategy and is carrying out the necessary changes, especially with regard to military and political leadership.

It is worth mentioning that, in 2022, the US Department of Defense is planning to invest $66 billion in the Indo-Pacific region.

However, this is part of the US’s Pacific Deterrence Initiative (rather than Indo-Pacific), which aims to improve US “capabilities, posture, training, and readiness, along with those of our key allies and partners.” In fact, the majority of the Pentagon’s investments in a more lethal, resilient and ready Joint Force are directly or indirectly aimed at supporting this strategic imperative.

On 9 June 2021, the US Secretary of Defense announced that his department had revised its strategy on China. “The initiatives I am putting forward today are nested inside the larger U.S. government approach to China and will help inform the development of the National Defense Strategy we are working on,” said Defense Secretary Lloyd Austin. “The efforts I am directing today will improve the Department’s ability to revitalize our network of allies and partners, bolster deterrence, and accelerate the development of new operational concepts, emerging capabilities, future force posture, and a modernized civilian and military workforce.”

The defense secretary will directly oversee the Defense Department’s policies, operations and intelligence related to China as the Target Group’s recommendations are incorporated into ongoing reviews and Department-wide processes.

For the US, this reorganisation is associated with China’s growing influence. It also includes a stepping-up of the Quadripartite Security Dialogue between the US, India, Japan, and Australia.

The EU, it seems, has decided to support these US initiatives. This is the second point. Beginning with the report “EU-China – A strategic outlook” published in March 2019, which describes China as “a systemic rival promoting alternative models of governance”, Brussels has been copying Washington’s anti-China narratives step by step and adapting them for its own foreign policy. Meanwhile, the G7 summit held in the UK on 11 June also had an agenda, and coordinated action against China was discussed.

Those in favour of the EU getting involved in this agenda argue that, rather than remaining toothless, Europe should actively get down to business in the region. And this position is supported by India, of course. Jawaharlal Nehru University’s Shreya Sinha notes that “the Strategy comes at a time of unprecedented rise of China at the global scale. It puts the Union at loggerheads with China as Beijing continues to threaten the security of the area by claiming indisputable sovereignty over the Nine-Dash Line in the South China Sea. Historically viewing Europe-China relations indicate numerous instances when the EU and China have found themselves at loggerheads. Moreover, in recent years in particular, the EU has not only been apprehensive of the Chinese provocation of European countries pushing them towards adopting a ‘One-China’ Policy’ with no exception, but also of China’s assault on Hong Kong’s independence as well as China’s assertion of a wolf warrior diplomacy across its foreign policy… A well-drawn-up strategy needs to be coupled with robust implementation to emerge as an effective device of change. While the coming of the EU’s Indo-Pacific Strategy gives it a ticket to a realm and access to a region which is defining the current global order, it is imperative for it to not succumb into irrelevance by becoming a toothless tiger in order to eventually lead to the actualisation of the EU as a truly strategic global geopolitical actor.”

Unfortunately, statements like these are more of an incitement than a desire for the EU to be a sovereign entity when making decisions on global issues. The EU can only become a true geopolitical actor when it rids itself of US influence. And it makes no difference if the strategy is for the Pacific, India or Arctic region.

Even in the US, there are sober views on the state of affairs in the region and the necessary response to China. Lyle Goldstein, from the US Naval War College, has pointed out a huge number of contradictions in America’s Indo-Pacific strategy, which is reminiscent of the “unipolar moment” in 1992, and that even Sino-Indian rivalry should not affect US interests. He writes: “[T]he Indo-Pacific framework proved long on rhetoric and ideology, but failed to grapple seriously with the underlying changes in the regional balance of power that must occasion a new U.S. strategy based on realism and restraint. The Biden administration should not overlook the former strategy’s foundational weaknesses. The new team would be wise to junk the old strategy and start fresh.”

PUTIN IN THE HEIGHTS – Plus: Nato vs China & Israel’s Aggression Continues

One thought on “EU Ready To Help US Counter China”