HOME / Politics / Ecology As A Weapon Of Globalism

Ecology As A Weapon Of Globalism 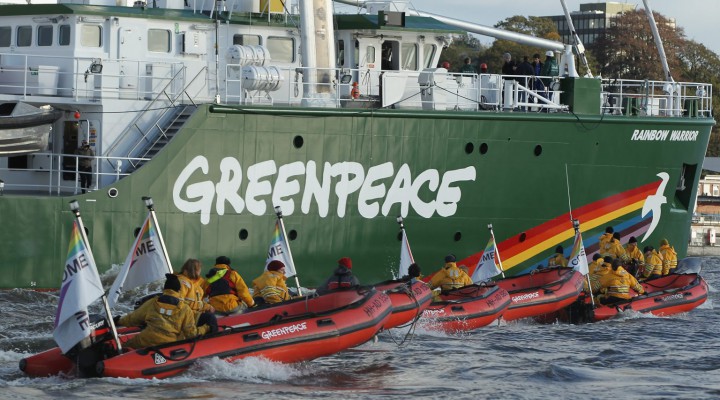 Members of the G7 regularly try to impose their rules and standards on other countries, rules and standards that limit sovereignty and infringe on national interests. Transnational corporations are also involved in this geopolitical game. Billionaires from Bill Gates to George Soros are using the environment for their own gain, developing long-term strategies at national, regional and global levels.

A number of international organisations that claim to have high moral aspirations are actually mixed up in sordid scandals linked to Western political and business circles.

On 19 September 2013, for example, Greenpeace staged an incident against Russia when activists tried to deliberately attack the Russian oil platform Prirazlomnaya, owned by Gazprom, using the vessel Arctic Sunrise. Several people tried to climb onto the platform, two of whom fell into the water and were rescued by a border patrol boat before being detained by Russian border guards.

It is obvious that this action had a clear geopolitical agenda linked to Russia’s interests in the Arctic and the creation of a negative image of Russia in Western society.

The Arctic Sunrise was flying the Dutch flag, and the BBC, citing Greenpeace, reported that there were nationals from 18 countries on board: Argentina, Australia, Brazil, Canada, Denmark, the US, the UK, the Netherlands, New Zealand, Ukraine, Russia, France, Italy, Turkey, Finland, Switzerland, Poland, and Sweden. So, the organisers’ intention to create an international scandal is obvious.

The incident itself took place on the run up to the Arctic summit in Salekhard, so Russian President Vladimir Putin was forced to express his opinion on it.

It is a well-known fact that some transnational corporations use Greenpeace as a tool for achieving certain political goals. It has been noted more than once that many of the organisation’s actions have, for some reason, been directed against certain companies, while their competitors have quietly reaped the benefits. This is due to generous donations from interested parties: they pay for their competitors to be eliminated under an “environmental” pretext. At the same time, many humanitarian disasters, such as NATO’s use of depleted uranium munitions during the 1999 bombing of Serbia, were simply ignored by Greenpeace. Yet Greenpeace traditionally tries to address global issues. Clean air on the planet, water sources and other problems are always on the political environmentalists’ agenda because these justify interfering in the internal affairs of other states.

With that in mind, there can be no talk of any morals or values allegedly upheld by the organisation. Greenpeace’s work ethic is characterised by a basic principle: the end justifies the means. Greenpeace has often been caught and prosecuted for fabricating evidence alleging environmental damage. The following episodes are good examples:

• deliberately torturing seals in front of a camera in 1979;

• hiring teenagers to rip the foetus out of a pregnant kangaroo for the 1986 Greenpeace film Goodbye, Joy;

• depicting clean sand as radioactively contaminated in 1996; and

• paying teenagers in Seattle $5 each to protest in front of cameras against the sale of Icelandic fish in 1999. Greenpeace co-founder David McTaggart was also involved in real estate fraud. He took part in creating the organisation itself, which grew out of a small group of devoted activists. Greenpeace is careful to keep facts like these hidden, of course. But then numerous liberal politicians and activists around the world help them preach their lofty ideals.

George Soros’ funding of environmental activist Greta Thunberg is further evidence that there are ideological and political interests hidden behind artificially cultivated “heroes” that suit the tastes of an era.

In early 2020, George Soros announced that he would be donating $1 billion for the creation of a global university to fight authoritarian governments and climate change. He did not have to wait long. In the same year, an international organisation called the Open Society University Network was launched. The global network includes around 40 educational institutions and universities from around the world, not only the US and Western Europe, but also Kyrgyzstan, Serbia, Kenya, Taiwan, Myanmar, Bangladesh, Colombia, and Lebanon. It is probably safe to assume that Soros will try to expand this network and at the same time exert influence on various governments through its existing affiliates. The Open Society University Network educates young people, has research projects (eight in total), and is engaged in research programmes. There are also specialised doctoral degrees and places through the UK’s Chatham House Academy.

One of the Open Society University Network’s areas of focus is “civic engagement”, which, in turn, is subdivided into three components: student engagement; engaged learning; and institutional engagement, which involves deepening international connections. This strategic initiative is clearly aimed at the creation of a global shadow “state” – an international network of globalist activists with its own army of young street protesters, and layers of academics and political practitioners.

Another fact to note is that Mikhail Gorbachev, the gravedigger of the USSR, is the founder and president of Green Cross International, which was set up in 1993 and, as can be guessed from the name, deals with environmental issues. Its headquarters are located in Geneva. Since 2019, Diane Meyer Simon, an American who used to be head of Global Green USA, has served as the organisation’s chair. In addition to water access and other purely environmental issues, the organisation deals with disarmament, the non-proliferation of weapons, and the control of nuclear and chemical materials. The US State Department has a hand in this, and, through various forms, it tries to establish monopolies in dual-use technologies and arms production.

The coordinated activities of organisations like these and the globalist elite could lead to a new model of colour revolutions. While the colour for organised coup d’états used to be chosen according to the political symbolism of the parties that took power by working for the US, “environmental” zombification through education programmes, grants and media manipulation could soon create a certain “green” narrative.

A Green-Washed Global Economy – A Delusion That May Crash It

0 thoughts on “Ecology As A Weapon Of Globalism”