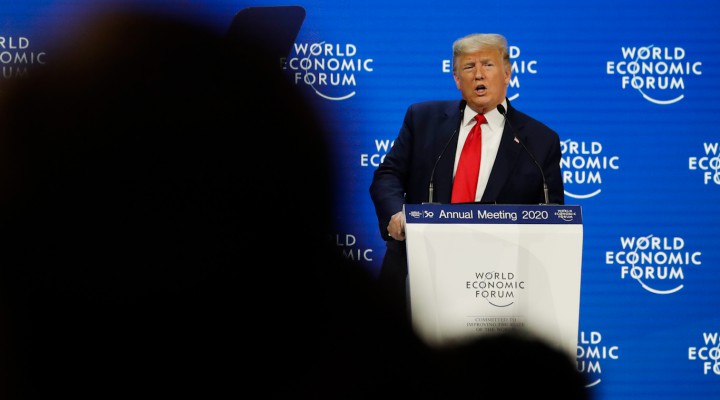 Research has shown that the people most responsible for a warming planet were disproportionately the same people attending the summit and an increasing number of observers see climate change, inequality and capitalism as bound together.

MPN– The world’s wealthiest elites are congregating in the Swiss mountain resort of Davos for the 2020 World Economic Forum, a place where thousands of the planet’s most influential business people meet to discuss the state of the world. Climate change is a big topic at this year’s event, themed “stakeholders for a cohesive and sustainable world.” Teenage climate activist Greta Thunberg was invited to speak, using the opportunity to condemn those assembled for their actions and inactions regarding the most pressing problem facing humanity.

Her words, and her actions will go down in history.

“I wonder what will you tell your children was the reason to fail and leave them facing… climate chaos that you knowingly brought upon them? That it seemed so bad for the economy that we decided to resign the idea of securing future living conditions without even trying,” asked the Swede, excoriating business and political leaders. “Our house is still on fire. Your inaction is fuelling the flames by the hour, and we are telling you to act as if you loved your children above all else.” While some in attendance have echoed her words – the United Kingdom’s Prince Charles, for example, has called for a “paradigm shift” with regards to global warming – Thunberg herself attacked the political elite for their “empty words and promises.” “You say, ‘we won’t let you down. Don’t be so pessimistic.’ And then? Silence,” she told those assembled to listen to her.

One attendee that Thunberg has certainly failed to convince is President Donald Trump. The president appeared more concerned that the teenager had beaten him out to be Time Magazine’s Person of the Year 2019. “Fear and doubt is not a good thought process because this is a time for tremendous hope and joy and optimism and action,” he said yesterday, presenting Thunberg as an alarmist charlatan. “To embrace the possibilities of tomorrow, we must reject the perennial prophets of doom and their predictions of the apocalypse.”

The president pointed the finger at developing countries for problems of global pollution. “The fumes are rising at levels that you wouldn’t believe,” he said, “Our numbers are very good, our environmental numbers. Our water numbers, our numbers on the air are tremendous. We have to do something about other continents and other countries.”

Yet, as research has shown, the people most responsible for a warming planet were disproportionately attending the summit. A report from Oxfam on the climate crisis concluded that “climate change is inextricably linked to economic inequality: it is a crisis that is driven by the greenhouse gas emissions of the ‘haves’ that hits the ‘have-nots’ the hardest.” It found that the poorest half of the world’s population are responsible for only around 10 percent of total global emissions, despite living in countries most affected by the problem. In contrast, the richest 10 percent produce half the world’s pollution, with the top one percent’s carbon footprint around 175 times that of a poor African or Asian. This number rises exponentially higher when discussing the world’s super wealthy. U.S. emissions per capita are almost three times French emissions and double the Japanese figures.

Perhaps even more importantly, the Climate Accountability Institute found that just 100 massive corporations are responsible for 71 percent of the world’s emissions, with over half of all CO2 produced by just 25 entities. Huge fossil fuel companies like ExxonMobil, Shell, BP and Chevron dominate the list.

That is the reason why an increasing number of observers see the problems of climate change, inequality and capitalism bound together, it being impossible to solve the first two without a radical overhaul of the third. The Week’s Ryan Cooper wrote that the World Economic Forum demonstrates only one thing: “If the billionaire stranglehold over global politics is not broken, we are all going to fry in a future climate hell” as billionaires are happy to watch the world burn if it means increased profits. It is also the reason why Trump’s assertions that unnamed African or Asian countries are primarily at fault rings hollow. If the president wants to play the blame game, he could have stayed at home.