HOME / SOCIAL/CULTURAL / Report: Prepare for the Climatic Collapse of Civilization 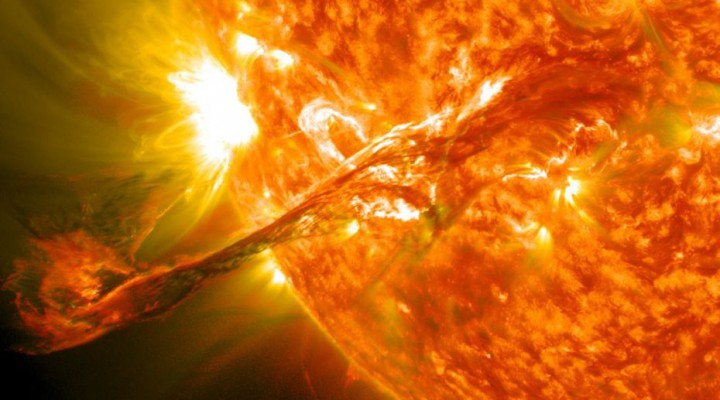 The authors of the Australian report believe that mid-21st century is the “point of no return” for Earth’s climate. However, other scientists believe that we have already reached that point.

Two authoritative Australian experts, backed up by a retired admiral of the Royal Australian Navy, recently issued a dire report that warns of an impending collapse of civilization from human-caused climate change. The report, titled “Existential climate-related security risk:

A scenario approach,” is not the product of alarmists, but of two authors with expertise in their professional areas. Only one of the authors is an environmental expert. He is David Spratt, a Research Director at the Australian National Center for Climate Restoration in Melbourne. The other, Ian Dunlop. Is an unlikely harbinger of environmental doom. Dunlop comes out of the executive ranks of the coal, oil, and gas industries – the usual opponents of climate science. Dunlop is a member of the Club of Rome and the former chairman of the Australian Coal Association, not places where one would normally discover climate change proponents.

Backing up the authors is retired Admiral Chris Barrie, the Chief of the Australian Defense Force from 1998 to 2002. It is no longer unusual to find military services warning about the impending catastrophic effects of climate change. In January 2019, the US Department of Defense’s

Office of the Under Secretary of Defense for Acquisition and Sustainment issued a report to the US Congress, “Report on Effects of a Changing Climate to the Department of Defense,” without the usual fanfare accompanying such an alarming finding. The Pentagon report, which forecasts US military bases susceptible to recurrent flooding, drought, desertification, wildfires, and thawing permafrost, was introduced in a low-key fashion due to the anti-science dogma of Donald Trump and key members of his administration. The Pentagon’s study sees 79 military bases to suffer from the effects of climate change. They include bases in Virginia, California, New Mexico, Utah, Florida, Colorado, Washington DC, Alaska, Pennsylvania, Georgia, Ohio, Hawaii, Guam, and even the National Security Agency (NSA) complex in Maryland and the Pentagon building, itself, in Virginia.

Although the Pentagon report avoided the global aspects of climate change, the Australian report was stark in its predictions for the immediate future. British author Nevil Shute’s 1957 novel about a post-nuclear war planet, titled “On the Beach,” which was followed by a 1959 film by the same title and produced and directed by Stanley Kramer, saw Australia as the last holdout on the planet from deadly radiation. Eventually, the radiation from the northern hemisphere crept southward, eventually eradicating the last human life in Australia. Many Australians prepare for the inevitable end by committing mass suicide in a national euthanasia program. The picture painted by the recent Australian climate impact report presents an opposite scenario from “On the Beach,” one that points to Australia being among the first regions to succumb to civilization collapse from climate change.

Admiral Barrie presents an “On the Beach” scenario in his foreword to the climate change report: “In Australia recently we have seen and heard signals about the growing realization of the seriousness of our plight. For example, young women speak of their decisions to not have children, and climate scientists admitting to depression as they consider the ‘inevitable’ nature of a doomsday future and turn towards thinking more about family and relocation to ‘safer’ places, rather than working on more research.”

The Australian report’s conclusions are sobering. It states: “Climate change now represents a near-to mid-term existential threat to human civilization.” Predicting the advent of a “hothouse Earth” by 2050, the report’s authors foresee devastating weather extremes, including wildfires, heatwaves, drought, and massive flooding. The loss of the Asian monsoons, glacial and polar ice, slowing of the Atlantic Gulf Stream, and collapse of the Amazon and other eco-systems will result in massive population shifts. The report states that such conditions will result in “outright chaos” and the “end of human civilization and modern society as we have known it.”

Although the report calls for a “Marshall Plan” on a national security level to immediately deal with the threat of civilization collapse, we have seen critically important nations elect political buffoons, all climate change deniers, to their leadership. These include Mr. Trump in Washington; Brazilian President Jair Bolsonaro, who disregards climate science and plans to massively develop the Amazon Basin, known as the “lungs of the planet;” Argentine President Mauricio Macri; and Australia’s recently- reelected Prime Minister Scott Morrison; with the possibility that either “Mr. Brexit,” Nigel Farage, or climate change erratic skeptic Boris Johnson ending up as British prime minister.

It is the collapse of food production that spells the onset of civilization collapse, according to the Australian report. The disruption of the human food supply will be brought about by heat waves, floods, storms, and the decline in beneficial insect populations. Food and water shortages will lead to social upheaval on a scale virtually unknown in modern times. Oceanic flooding of some of the world’s agriculturally-important river deltas – including, the Mekong, Ganges and Nile – will result in massive population movement to areas where there is food and clean water. Seawater inundation will also make major cities uninhabitable and Chennai, Mumbai, Jakarta, Guangzhou, Tianjin, Hong Kong, Ho Chi Minh City, Shanghai, Lagos, Bangkok, and Manila will be abandoned. Even entire countries, like Bangladesh and small island-states, will lie empty.

The starkest prediction in the Australian report predicts that “even for 2°C of warming, more than a billion people may need to be relocated and In high-end scenarios, the scale of destruction is beyond our capacity to model, with a high likelihood of human civilization coming to an end.” The report points to the beginnings of climatic collapse with the current loss of Arctic sea-ice, the disintegration of the West Antarctica Ice Shelf and Greenland and Himalayan Ice Sheets, and global destruction of and coral reefs.

With limited human life-sustainable resources available, the Australian report foresees wars on an unimaginable scale and the breakdown of political and social order the lead-in to civilization collapse. The report states: “The flooding of coastal communities around the world, especially in the Netherlands, the United States, South Asia, and China, has the potential to challenge regional and even national identities. Armed conflict between nations over resources, such as the Nile and its tributaries, is likely and nuclear war is possible.” These scenarios are already beginning to play out, as Egypt, Sudan, and Ethiopia are already bickering over Ethiopia’s dam on the Blue Nile. The Nile is the lifeblood of Sudan and Egypt. For example, staking a newly-emergent claim for regional identity are the people of the Volta region of Ghana, who see the central government draining their water resources with the Akosombo Dam on the Volta river. Restive inhabitants of Argentina’s Patagonia region complain about foreign billionaires buying up property in their pristine homeland for the purpose of re-locating Jewish climate refugees from Israel, the United States, and Europe. Other emerging eco-separatist “go-it-alone” movements are springing up in Australia’s island state of Tasmania, the US state of Vermont, the Canadian region of Labrador, and the Rwenzori Mountains of Uganda.

The breakdown of social order will see an increase in the kidnapping of foreign tourists in countries for the payment of ransom, piracy on the high seas, looting of stores and warehouses, bank robberies, and other law-breaking activities by people desperate to provide food and clean water for their families.

The authors of the Australian report believe that mid-21st century is the “point of no return” for Earth’s climate. However, other scientists believe that we have already reached that point with extreme weather already resulting in massive crop losses and flooding now routine in Miami, Houston, Venice, Dhaka, and other major cities.

Report after report warning of the disastrous consequences of climate change are not coming from environmental activist groups, but from the intelligence, national security, and defense sectors. In November 2018, the Trump White House issued the Fourth National Climate Assessment, based on the research of 300 scientists and 13 federal agencies, including the Defense Department. The report concluded that climate change now poses a direct threat to human life, ecosystems and the US economy. Trump dismissed his administration’s own report. In January of this year, the US Intelligence Community’s annual Worldwide Threat Assessment concluded that environmental degradation will “fuel competition for resources, economic distress, and social discontent through 2019 and beyond.” And recently, the White House blocked the testimony before Congress of a State Department Bureau of Intelligence and Research expert who planned to warn of the immediate effects of rising sea levels and ocean acidification. The blocking came as Trump dismissed the climate change warnings of Britain’s Prince Charles after their meeting in London.

The only humor that can be found amid all the dire and depressing warnings about impending societal collapse is the fact that among the first victims of rising sea levels will be Trump’s billionaires’ club estate at Mar-a-Lago, located on the barrier island of Palm Beach on Florida’s Atlantic coast. Currently, king tide effects are causing some sewage and septic tank systems on the island to fail. The steady rise in sea levels means that within the next ten to fifteen years, Mr. Trump’s vacation Shangri-La will be inundated with sea water and raw sewage. For Trump, who withdrew the United States from the Paris Climate Accord, it will be a fitting end for his seaside playground.

0 thoughts on “Report: Prepare for the Climatic Collapse of Civilization”