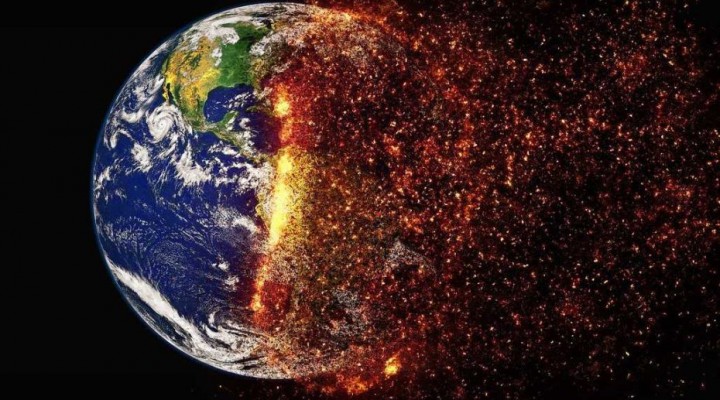 The rise to power of the eco-nihilists will intrigue future historians. They will ponder why, faced with sound scientific data, certain world leaders insisted on doing nothing to prevent the demise of their nations as well as global civilization.

There is a new type of pirate on the international scene. These are not the swashbuckling brigands of yore but national leaders who are intent on plundering and pillaging the world’s most-environmentally sensitive resources. From the Amazon rainforest, described as the “lungs of the Earth” because it provides 20 percent of our planet’s oxygen, to Greenland and the Antarctic, unscrupulous and ignorant leaders are placing the entire planet in jeopardy. These leaders include Donald Trump and Brazil’s Jair Bolsonaro, who fancies himself as the “Tropical Trump.” In rejecting scientific methods of measuring and tracking the adverse effects of climate change, political leaders like Trump, Bolsonaro, Philippines President Rodrigo Duterte, and others are practicing a form of epistemological nihilism, which posits that environmental and climatic science proving the effects of cascading man-made climate change are untrue.

It is a close race to determine whether Trump or Bolsonaro are having the greatest negative impact on Earth’s climate. Although both reject sound scientific methodology, Bolsonaro slightly edges out Trump due to the fact that the “intellectual” guru for Bolsonaro, a far-right Brazilian “end-times” evangelical “Christian,” is a Virginia-based conspiracy monger named Olavo de Carvalho. Among his other fanciful notions, Carvalho entertains the idea that the Earth is not a sphere but flat.

As wildfires of biblical proportions plague Alaska, Siberia, and the Amazon Basin, unprecedented heat waves hit Europe, and the Greenland Ice Sheet and Western Antarctica melt as Trump figures out how to annex Greenland from Denmark, Bolsonaro is fiddling while the Amazon rain forest burns. Called the “lungs of the Earth” because of its provision of 20 percent of our planet’s oxygen, the Amazon is plagued by Brazilian farmers committing systematic arson to open up more grazing land for cattle. Bolsonaro, who, like Trump, pulled his nation out of the Paris Climate Agreement, has encouraged overdevelopment of the Amazon Basin and given a green light to the forest’s ecocide and genocide of one million indigenous tribes that for millenia have called the region their home.

Bolsonaro and Trump are acting in tandem to see who can do the most damage to the Earth’s environment. Trump has called global climate change a “Chinese hoax” and has scrapped most of the federal environmental protection laws, putting him at loggerheads with state governors and attorneys general and the leadership of America’s automotive industry. Bolsonaro, who rejects climate science like some modern age Luddite, has severed the role of Brazil’s National Institute for Space Research (INPE) in conducting satellite surveillance of the Amazon rainforest and fired its director for providing accurate statistics on the rate of Amazon destruction. Bolsonaro is outsourcing the function to a private company, one of several linked to his business network of corrupt political cronies. Bolsonaro, in Trumpian fashion, accused the director of the Brazilian Institute of the Environment and Renewable Natural Resources (IBAMA) of being on the payroll of a “foreign NGO.” Bolsonaro rejected IBAMA’s determination that in July 2019 there was a 278 percent increase in deforestation of the Amazon from the rate measured for July 2018.

Bolsonaro’s antics have earned him sharp rebukes from Europe, where the effects of planetary warming have resulted in dramatic consequences, including scorching heat waves. The Elysee Palace issued a statement that Bolsonaro lied to President Emmanuel Macron when he told the French leader that he would protect the biodiversity of the Amazon. France and Ireland announced their opposition to a trade deal between the European Union and the Mercosur trade bloc, which is now dominated by right-wing regimes in Brazil, Argentina, and Paraguay. Germany and Norway suspended their financial assistance to the Brazilian government’s Amazon fund due to the inaction of the Bolsonaro regime in failing to live up to its commitments to protect the Amazon region.

Macron was prepared to discuss the destruction of the Amazon at the G-7 summit in Biarritz. However, noting that Trump would likely balk at a traditional summit communiqué, decided to forego the consensus statement because, among other issues, Trump was likely to defend his fellow environmental pirate, Bolsonaro, against any move to single out Brazil for criticism.

Trump and Bolsonaro are not the only environmental pirates on the loose in the world but they are the most destructive. Duterte of the Philippines has categorized climate scientists as “noisy” and he fired one of his government officials for attending too many climate conferences. Duterte is also a skeptic about the benefits of the Paris Agreement. Other climate scofflaws include the Central American nations of Guatemala and Honduras, both ruled by right-wing authoritarian regimes. Insufficient attention to crippling droughts that have forced many Guatemalan and Honduran farmers and their families to migrate north to the United States to face even greater trauma inflicted by Trump’s border security forces have been the hallmarks of the regimes in Guatemala City and Tegucigalpa.

India’s Prime Minister Narendra Modi is another leader who has a jaundiced view of the actual causes behind climate change, an event that will eventually lead to the melting of the Himalayan glaciers and result in the drying up of India’s major rivers that provide water to most of India’s massive population. In 2014, Modi answered a question on climate change from a student from Assam, a Himalayan state already beset by the ravages of climate alteration. Modi replied to the student, saying, “Climate change? Is this terminology correct? The reality is this that in our family, some people are old . . . They say this time the weather is colder. And, people’s ability to bear cold becomes less . . .We should also ask is this climate change or have we changed. We have battled against nature. That is why we should live with nature rather than battle it.”

Modi is not quite an environmental pirate on the scale of Trump, Bolsonaro, and Duterte, but he has shown great promise to achieve such ignominy. Someone already ranking among the environmental policy pariahs is Australian Prime Minister Scott Morrison. At a recent summit of the Pacific Islands Forum in Tuvalu, Morrison prevented the gathered leaders of Oceania to issue a strong final communiqué calling for urgent action to deal with rapidly cascading climate change. Morrison, who is owned and operated by Australia’s coal companies, insisted on a watered-down final statement by the leaders, an action that bitterly disappointed the forum host, Tuvaluan Prime Minister Enele Sopoaga. Tuvalu may be among the first to succumb to rising sea levels, making it the world’s first ex-situ nation resulting from climate change. While Morrison was away in Tuvalu, Australian Deputy Prime Minister Michael McCormack, Australia’s fanatical equivalent of US Vice President Mike Pence, said of the embattled Pacific islanders, “They’ll continue to survive because many of their workers come here to pick our fruit.” The racist diatribe was not lost on island inhabitants across the Pacific expanse, from Palau in the west to Tahiti in the east.

Environmental pirates are also found in the leadership of the far-right political parties around the world, including the Alternative für Deutschland (AfD). The AfD policy plank on the climate preaches classic climate change denial canon in stressing “the influence of CO2 on global temperatures cannot be proven and carbon emissions reduction measures thus do nothing to protect the climate.”

The rise to power of the eco-nihilists – Trump, Bolsonaro, Duterte, Morrison, and others – will intrigue future historians. They will ponder why, faced with sound scientific data, certain world leaders insisted on doing nothing to prevent the demise of their own nations, as well as global civilization.