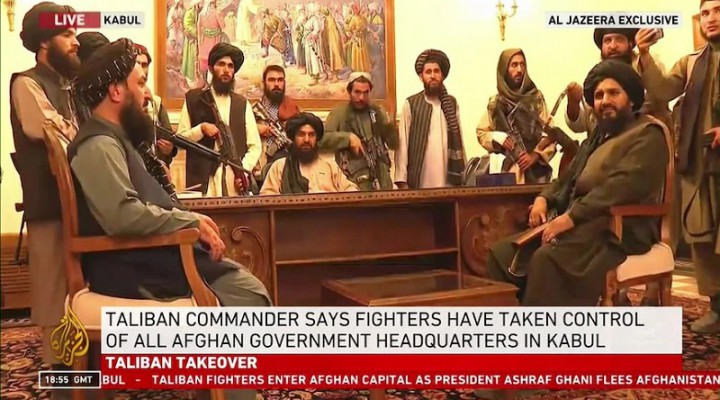 It’s almost poetic that it was the Taliban of all forces – who are condescendingly seen by average Americans as so-called “barbarians” – that exposed two decades’ worth of lies spread by the most powerful propaganda machine in human history, the US media.

American officials, media, and experts were all completely wrong about Afghanistan. They told the world that their allies in Kabul would remain in power after US troops completed their withdrawal by the end of the month, yet that government just collapsed on Sunday. There wasn’t any feared “Battle of Kabul” either since most of the resisting forces peacefully surrendered to the Taliban. Their morale was depleted after America withdrew most of its air support for their forces in the run-up to its withdrawal and city after city across the country transferred to the Taliban’s control. They knew there was no point in them losing their lives for nothing.

These dramatic developments expose America’s two decades of lies. The US never truly had control over Afghanistan, all that it had was the illusion thereof. Its airpower ensured that the Taliban couldn’t regroup en masse and conventionally threaten any of the country’s cities except on the rare occasions that this actually ended up happening, albeit only briefly in those cases. Symbolically, American decision makers and their surrogates in academia and the media had their heads in the clouds just like their nation’s warplanes since they lacked any real understanding of the actual situation on the ground this entire time.

The Taliban succeeded in winning hearts and minds by convincingly presenting itself as the so-called “lesser evil” throughout the years. Despite a significant share of the population having been displeased with their five-year rule over 90% of the country from 1996-2001, most of those who held such views eventually came around to appreciating those times in hindsight. That wasn’t too difficult for the group to pull off either since the Afghan National Army (ANA) and its US-NATO allies killed countless civilians with impunity through indiscriminate attacks against weddings and even people’s own homes in their quest to destroy the Taliban.

All of that collateral physical damage also had collateral soft power consequences in decisively shifting sentiments on the ground away from the American-backed government and towards the Taliban. The group spent years showing average Afghans that it’s more just and responsible than their internationally recognized government. The Taliban snuffed out corruption in the areas under its control, cracked down on the drug trade and associated organized crime that flourished with tacit American approval ever since they were forcefully deposed, and began expanding its nationwide network of supporters throughout Afghanistan’s cities.

This third aspect of their strategy is what resulted in so many of them peacefully surrendering to the group over the past two weeks and the Taliban taking over a country the size of Texas in that same time. This reality was largely hidden from the world’s view and described as so-called “terrorist propaganda” whenever it filtered through to the mainstream or alternative media. Nevertheless, it was the most accurate portrayal of the situation in hindsight but was fiercely suppressed from the global consciousness by the US and its influential allies in academia and the media. They lied to the world to cover up the real reason for their war.

The US didn’t invade Afghanistan and then occupy it for nearly two decades to “defend democracy” and “promote human rights”, but to exploit the geostrategically positioned country as a springboard for destabilizing the broader Central-South Asian region through Hybrid War means connected to exporting Color Revolutions and terrorism to the neighboring countries. To the Taliban’s credit, it eventually cut off its foreign terrorist ties and began safeguarding minorities’ and women’s rights, which resulted in it being perceived as legitimate stakeholders in the conflict. That in turn led to China, Russia, and others negotiating with them.

This whole time, the world was misled by the US into believing that the Taliban was an unpopular fringe terrorist group that had been all but defeated when in reality it was becoming a genuinely popular national liberation movement on the cusp of mostly peacefully returning to power. All the while, the US’ powerful military-industrial complex laundered over $2 trillion through this “endless war”, which is another reason why they wanted to indefinitely perpetuate it until the very end before US President Biden bravely put a stop to it. He didn’t do this in the interests of peace though but to redeploy US forces to the Asia-Pacific to contain China.

The lessons to be learned from the belated exposing of these shameless lies is that the US can never be truly trusted. Whether its officials and surrogates are talking about their latest war or Iran, nothing that they say is ever fully the truth truth, if there’s even any truth to their words at all. It’s almost poetic that it was the Taliban of all forces – who are condescendingly seen by average Americans as so-called “barbarians” – that exposed two decades’ worth of lies spread by the most powerful propaganda machine in human history, the US media. At the end of the day, David once again beat Goliath, and the global cause of truth is all the better because of it.