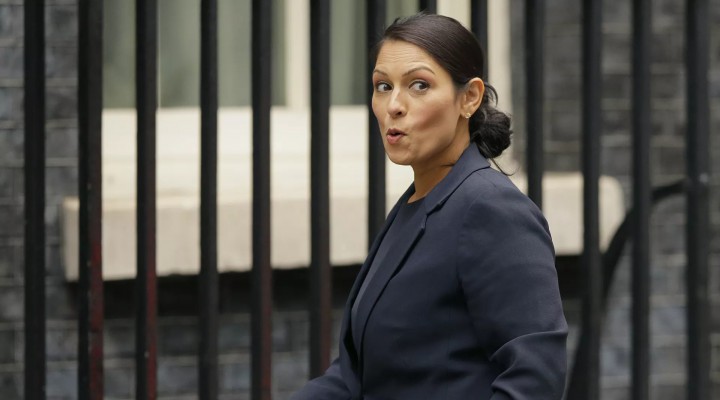 United Kingdom cabinet minister Priti Patel is accused of being heartless after giving orders this week for British patrol boats to turn back vessels carrying migrants towards France.

It’s a controversial move, to say the least. Under international maritime law, the first priority in intercepting a vessel at sea is to ensure the safety and rescue of people in distress.

Now Home Secretary Patel is rewriting international law by sanctioning British patrol ships to push back boats carrying migrants across the English Channel to where they came from – mainly France.

It is hard to imagine a policy so brazenly callous. Most of the people crossing the Channel are in overcrowded rickety boats or dinghies. Some have died already from drowning. Patel is prepared to play with their lives in her populist right-wing politicking with France.

It is true that there has been a surge this year in numbers crossing the narrow waterway between England and France. But the numbers are still small in comparison with those arriving by sea to other European countries, such as Greece, Italy or Spain.

Another damning issue is that the phenomenon of migrants coming to Europe took off in huge numbers around 2014. Most of the refugees are from Afghanistan, Iraq and Syria, as well as Iran. The significance is that the flow of people is correlated with criminal regime-change wars by Britain and its American master. Western crippling economic sanctions against Iran are no doubt a factor in people fleeing that country.

In other words, the problem of irregular migration to Britain is a case of chickens coming home to roost. But the British authorities want to wash their hands from complicity.

The British government accuses the French authorities of not doing enough to prevent refugees from boarding vessels and making the precarious voyage to the English coast. France says it can’t feasibly police every stretch of its coastline.

Under European Union rules, the Brits could have a point in returning migrants to the state where they were previously housed. But now that Britain is out of the EU, the convention of returning migrants and asylum seekers to prior destinations within Europe no longer applies.

Priti Patel was one of the most eager proponents of the Conservative Party for Brexit. Now that she has got “Brexit done” and undermined relations with the rest of Europe, Patel doesn’t want to face up to responsibilities under international law. For her the solution is simple: just rewrite international law.

That’s the same rank hypocrisy that the Tory government of Boris Johnson has shown over its legal commitments to the Brexit deal concerning Ireland. Don’t like the protocol signed up to? Then just repudiate it.

Patel has a lot of personal hypocrisy too. She is the daughter of Indian immigrants who came to England during the 1960s as refugees from the Idi Amin regime in Uganda. It’s tempting to say that under Patel’s current anti-immigrant regime, she wouldn’t have been born in England nor gained the advantages of a wealthy, privileged lifestyle.

It’s not unreasonable to accuse Patel (and the rest of her Tory regime) of being sociopathic. When she was previously an international development minister, she caused a scandal by secretly meeting with the Israeli government. Around the same time, she proposed cuts in humanitarian aid to Palestinians. Eventually, Patel was forced to resign that ministerial post after she was exposed for lying to her then-Number 10 boss, Theresa May.

She has also been plagued by accusations of bullying staff and generally of being a nightmare to be around. Civil servant advisors have resigned and won substantial court payouts due to her psychotic misconduct.

>Given her unscrupulous and reckless-cannon behaviour, you might wonder why Boris Johnson has stood by Patel and given her such a high-profile position in his cabinet?

The answer is straightforward. Anybody else pushing the callous policies towards immigrants is liable to bring the British government into disrepute as being “racist” or “xenophobic”. But with her Indian heritage, Patel can superficially ward off such criticism. That’s why Johnson keeps her on to oversee the dirty work of sending refugees back in their dinghies to France.