HOME / SOCIAL/CULTURAL / NEO: The Strange Case of an America in Flames 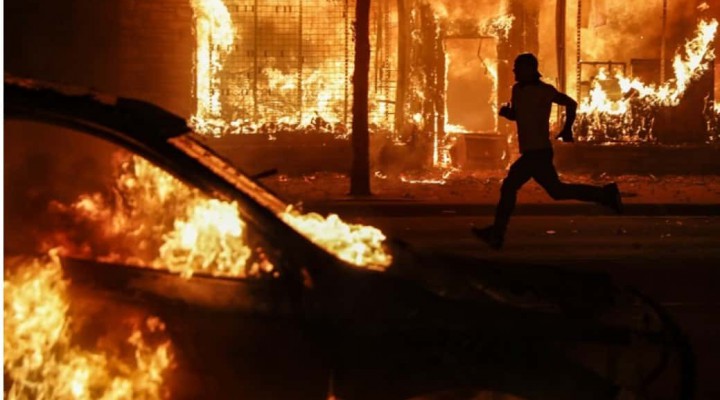 The tricks used against Libya, Syria and Ukraine are come home to roost

For a decade or more, the world has seen riots that weren’t riots at all, Maidan Square, Hong Kong, Tripoli, Cairo and they have seen terror attacks, Paris, Boston and others. All have been staged.

Now the US is in flames.

Is there something in common here? It doesn’t take a genius to figure out that Ukraine was overthrown by a CIA plot or that the Arab Spring, the series of fake revolutions, albeit failed, in Syria were staged as well, every single one.

Now those who have turned the world inside out are ready to turn inward, albeit “again,” and take the US one step toward the Orwellian nightmare political analysists predicted after the 2016 election.

The tools were honed in the post-9/11 world, fueled by fake wars, fake terrorism, trillions in stolen wealth and a security bureaucracy that now employs two million Americans, almost as many as America imprisons.

Where is the “dark heart” of America’s Deep State?

Now it’s time for America to benefit from the years of knowledge and experience gained by the US Army Intelligence School at Fort Huachuca, Arizona, where those who planned Maidan and Hong Kong were trained.

We are now seeing the same faces burning police cars and leading groups of oddly well-groomed and almost entirely white rioters in a dozen cities, the story always the same, peaceful protests by African Americans and then the counter-protesters show up, and the burning and looting begins, “on cue” as it were.

The violent rioters? They are white, but more than that, it is a repeat of what we had seen so many times, it may well have been the streets of Dallas in 1963 or Hong Kong today.

Who are “they,” the players in this street theater?

The science of recruiting “flash mobs” using social media and directing urban warfare is a specialty for the US Army. In fact, this is how the United States prefers fighting wars nowadays, rioters, terrorists, targeted killings and black propaganda.

Now it is turned against the United States in an election year where the current president is double digits behind in the polls and blamed, rightly so, for the largest disaster in history.

Which of Trump’s polices are keeping the Army, CIA and police, among others, working hand in hand to destroy America? Is it the massive tax breaks for the rich? Can it be the population reduction through mismanaging the pandemic? Is it defending Israel no matter how insane or absurd that nation has become?

Are there more sinister reasons or does it matter?

However, there is nothing “organic” about any of this, not the odd coincidence of Floyd and his killer, or one of them, being someone he had to know personally and know quite well, something the media uncovered and then quickly hidden, as though ordered to.

Let’s go back a few weeks. Americans were dying, then only tens of thousands, not the well over 100,000 dead at this writing. Rioters had stormed the Michigan Capitol in Lansing, carrying weapons, some fully automatic military weapons with large capacity magazines, into the gallery to intimidate legislators.

The organizations involved, despite the pandemic, were openly working from state to state, driving the same floats, the same cars, traveling thousands of miles and, you guessed it, though this was illegal, the police did nothing.

Of course, these organizations were funded by Betsy DeVos, sister of Erik Prince, the hand suspected behind a dozen or more conflicts around the world.

Then, when it turned out that many of those who were openly carrying military weapons into government buildings were legally prohibited from owning weapons or even voting due to criminal convictions and domestic violence issues, still the police did nothing.

Now the police are doing everything, particularly when confronted with peaceful protests in dozens of cities. The more peaceful, the more violent the police.

Then again, wait just a bit and the same faces show up, the military type “high and tight” haircuts on those throwing Molotov cocktails and chunks of concrete. No protest can stay peaceful while militarized police require violence to unleash their “vicious dogs” and “ominous weapons” as Donald Trump termed it in a Saturday, May 30, 2020 Tweet.

Then there are the armies of white suburban teenagers brought in by social media, every video shows them, and no one but those who are trying to keep protests peaceful asks the question, why are they here?

That answer is easy as well, the use by the CIA and US Army of “social influencers” to stage violent events. The CIA and Army Intelligence loves “white teenagers,” the children of privilege and disaffection, who are most easily led to violence.

What do you think video games are for?

The specialized software used to organize and “unleash,” a modified version of the same software political groups use, has mapped every nation of earth and identified hundreds of thousands of primary “influencers” who are fed “seeded material” and, for the top tier, put on payroll.

Beneath them are millions, in every nation, who are profiled by an AI (artificial intelligence) the US claims doesn’t exist, some found “useful,” and others targeted for arrest or worse.

I have worked on these programs and have the software. I have seen it deployed in Egypt firsthand, but also in other nations as well, creating layers of maps that show every neighborhood, maps that label, classify and identify not just thousands but millions.

In the US, the organization that does this, the planning and capability, for the US Army is Google Idea Groups/Google Jigsaw, working with Facebook and a series of tech companies and led by former White House security advisor Jared Cohen.

Jared Cohen, as a Google employee, teaches irregular warfare using social media to the US Army. Cohen regularly lectures at West Point on this particular subject.

We have identified organizations, whether intelligence agencies, civilian or military or be they political, which means “globalist,” as prime actors.

We might also safely assume that every event is monitored and exploited, in fact we know it is. Can we also assume that many, it not most or even all “acts” are staged as well?

One then starts a process that begins with “who does it benefit?” Seldom is the answer “terrorists” or “freedom seekers.” The answer, invariably, turns to the “usual suspects.”

They have always controlled the guns and prisons.

Then one might ask, what about the genuine aspirations of humanity seeking freedom? However, were such to exist, the capabilities for corrupting or crushing same are why Google is Google.

What if one were to look around the world, using such tools as one can garner, all of which involve the internet, all of which are filtered and twisted, censored and seeded with flummery, what purity of heart could one find?

If it existed, the media would call it terrorist, and the US would unleash drones against it.

It would be sanctioned.

On the streets of America, thousands are fighting for their lives against vicious militarized police who long ago aligned themselves with globalist elements.

For two decades, the primary goal of the US military has been to create a world climate where police state controls, total surveillance, total control and manipulation, exist around the world.

The world’s “business community” demands it.

Now, here in the US, the tricks used against Libya, Syria and Ukraine are come home to roost.

0 thoughts on “NEO: The Strange Case of an America in Flames”