HOME / Multimedia / COVID, ‘Post-Truth’ and the Death of the Alternative Media

COVID, ‘Post-Truth’ and the Death of the Alternative Media 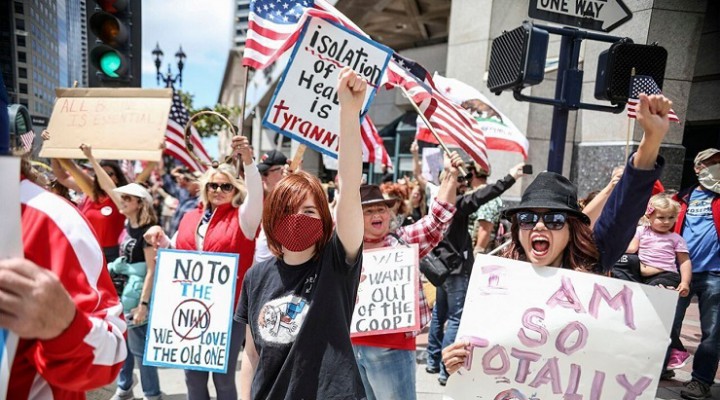 “I must not fear. Fear is the mind-killer. Fear is the little-death that brings total obliteration. I will face my fear. I will permit it to pass over me and through me. And when it has gone past I will turn the inner eye to see its path. Where the fear has gone there will be nothing. Only I will remain.” ― Frank Herbert, Dune

Today, the independent journalists, almost all of them, who reported on false flag terrorism, fake gas attacks in Syria, who stood against war, racism and apartheid now enrich themselves peddling hoaxes about magnetic vaccines wild imaginary plots.

The uniting, and even defining central hoaxes involved computer chips in vaccine and the claim that COVID vaccines make people magnetic.

Their proof, supported by a physician in Ohio, are videos of people having their brass keys stick to them after being vaccinated.

The problem, of course, is that brass isn’t magnetic but why don’t our friends in the alternative media know that?

The question we will be driven to inexorably is this, if “they” are lying now, were the pronouncements we read year after year, books, articles, podcasts, “pap and drivel” as well?

Were and are most “activists” simply controlled opposition, or as they are called “limited hangouts?”

My answer, based on years of investigation using resources of a major corporate security agency is a resounding “yes.”

Those who don’t do as told die, are jailed or are crushed by Google and company whose biggest target for many years has been Veterans Today.

First of all we have to draw a line between known attention seeking nobodies who show up almost hourly with blogs and podcasts, even bus tours, peddling conspiracy theories bred from the fertile imagination of the fabricationists around Qanon.

Those following, let’s say, Frontline Doctors, backing their claims aren’t all nobodies. Who are the Frontline Doctors? Well, their leader is a physician trained in Nigeria who claims that “demon sperm” is a major cause of disease. Others in that organization, a fringe group heavily supported by right wing extremists, are less qualified.

Thus, the question we will look at today is this, what is the fallout when the clear majority of authors and academics who stood against the certified lies peddled by the mainstream media, are “burned.”

As of this writing, almost all of the supposed “best and brightest” of the crowd are, on a daily basis, now incorporating childish conspiracy theories in their writings.

As part of their process, many if not most have also politically moved to the right as well. Not satisfied with parroting odd claims about Bill Gates, most are now embracing white supremacism, voter suppression and abandoning all issues of social justice.

We begin with a single hypothesis, but others will follow. Are members of the alternative media being paid to promote COVID and vaccine hoaxes? If yes, is the purpose to cause additional deaths and economic loss, mostly to the US and UK, or is there something deeper behind it?

Is this an opportunity to destroy a powerful media force that “made its bones” exposing 9/11, the “war on terror” and globalist threats?

Evidence is mounting up that COVID-19 may well have supplied the “kryptonite” needed to tumble the credibility of those who have ridden Israel hard, with BDS and accusations of apartheid and broad war crimes. This is one, albeit the “holy grail” for the alternative media, the one area where most united, no matter color or political following.

The overriding injustice of our time has been this one issue, millions persecuted, imprisoned, bombed and strafed while the mainstream media and Hollywood have cheered.

Against this tide stood the alternative media, fighting this, fighting “big pharma” and fighting the culture of war that has taken control of the US and her partner nations, eternal war, war as a way of life and war as the tool to solve all problems, foreign and domestic.

Though we talk about Israel and the Palestinians, it was the Vietnam War that defined social disobedience and demonstrated how a twisted narrative could be overcome and a war that enriched so many of the world’s most evil could be ended.

In my attempt to ascertain the possible source of secret payoffs, I met at length with good friend and anti-vaccine activist Robert David Steele. Steele, a former CIA officer, recently died of COVID-19 during a nationwide tour warning of the evils of vaccines. He was pilloried in the mainstream media.

When I met with Steele, prior to his fatal tour, he explained that he had been offered $35 million to support Donald Trump and other positions, like COVID and vaccine denialism. The money was intended to finance a presidential run. I was to be an advisor to the new government that he hoped would enact broad reforms, primarily realigning America and Israel in ways some might find uncomfortable.

Others, which include some of the best known independent writers of our time, tell of how their Patreon accounts are suddenly flush with cash after “changing sides.”

The problem here, of course is that this exposes another issue, one we had all suspected, that nobody, not the mainstream media, and certainly not the vast majority of those who claim to be independent, has real activist roots.

Most are simply attention seekers.

There is a list of others, names like Andre Vltchek, Michael Collins Piper or Alan Hart, the “true believers.” Why are so many of them dead?

Worse still, we are finding that many of those touring as 9/11 “truthers” or as “unlock/unmask” militia types are, in actuality, FBI informants.

Our assumption here is that not one in a thousand is “real.”

We can go even further than we have. If ideas, especially now in our device ridden existence, can be weaponized so easily, is it reasonable to assume that what can be controlled is controlled?

Any answer other than “yes” is absurd.

But doesn’t that also mean that the rallying cries we have received all those years may well have been orchestrated as a “relief valve,” channeling efforts against globalism and injustice into the useless and circuitous?

One need only look at 9/11 “activists” and their claims of death rays from space or magic chemical compounds, things that could never exist, to see an obvious example.

What does “post truth” mean? That’s simple, if you read it, it is a lie.

Then consider that the past dozen years of your online has created enough big data, reading each email or chat, each board post, all social media, each search or online purchase and quite probably your medical and banking histories as well, fed into supercomputers, to “clone” you.

What is to be accepted?

As an aside, some years ago I worked on a project in a Middle Eastern nation with a well-known canal. They were putting in place a broad program monitoring all social media. The data was being “churned” by a CIA sponsored program built around a “big data” model created to serve market research and advertising groups in the automobile industry.

In that nation, however, it would be creating a vast web of mapped interactions. Within weeks, the government had a database of all social groups covering millions, who they know, what they believe, identifying each as a possible threat or asset.

This effort began in the United States almost 30 years ago with a dozen Noble Prize winners using modeling design to sell dish soap being used to mobilize engineered social discontent.

What we need to ask is this, would we have ever seen COVID-19 if these programs didn’t exist? Would a potential engineered pandemic have been adequately profitable without the ability to perpetuate and monetize the disease though disinformation?

Pandemic Politics… Democrats and GOP Are the Disease Party

Without admitting it, we are already converted to transhumanism

The People Are Unaware of the War Being Conducted Against Them

The Vaccine, Not Covid, Is the Threat

We Are Being Lied to Our Deaths

Some Facts About COVID, Be Afraid

0 thoughts on “COVID, ‘Post-Truth’ and the Death of the Alternative Media”