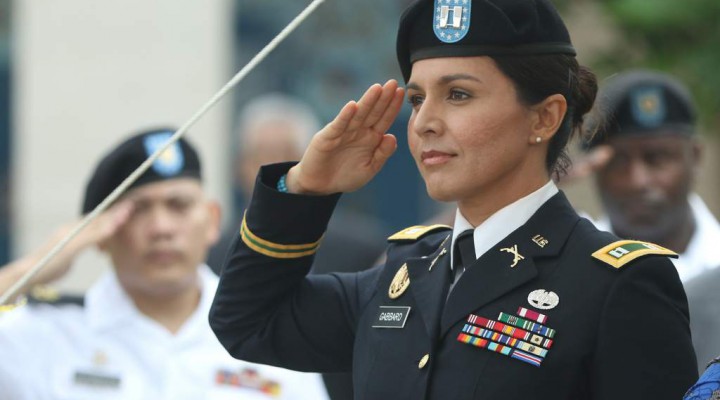 No VT personnel were arrested or hacked to death as in Turkey but VT has been subject to a Khashoggi type operation, this time involving smearing Rep. Tulsi Gabbard and involving VT in a fake espionage operation against the government of Syria.

Veterans Today has been repeatedly hacked.  As part of these hacks, the text has been altered, photographs removed from the archives and entire databases altered or erased.  We have even had servers destroyed.

All this is about Rep. Tulsi Gabbard, someone we support.

To add to this, hacks have been traced to computers at Fort Huachuca, Arizona and the Defense Intelligence Agency and to the Department of Veterans Affairs.  Colonel James Hanke, USA/SF (ret) met with the base commander at Huachuca and expressed our concerns that this facility was being used to hack a press website in the US.

Rep. Gabbard’s office complained to our publisher who inserted their denial without informing us.  The issue wasn’t that but rather than we published a denial of a fact we never asserted in the first place.

We find, in an April 2018 article, this statement made, allegedly by us, regarding representative Gabbard.  We made no such statement, there was no basis for such a statement, no source for such information and this information, to the best of our knowledge, is false:

“Russian officials in Syria informed Britain through Oman that they would have to directly deal with Syria for the return of their personnel. We have received no further information since Damascus has remained silent on how or if negotiations were proceeding.

We do know that US Representative Tulsi Gabbard of Hawaii, a US Army combat veteran of Iraq, met with both President Assad and Donald Trump, in order to arrange for a covert exchange, for substantial financial consideration, of captured Americans.

“met with both President Assad and Donald Trump, in order to arrange for a covert exchange, for substantial financial consideration, of captured Americans”.

She says “There is absolutely no basis or fact behind this statement and it needs to be removed immediately.”

Initial introductions for this meeting were done by VT.

Israel bought back a Brigadier General (they claimed he was a colonel) in 2015 that we know about.

The recent gas attack in Syria, timed as the last terrorists were surrendering for relocation inside the Douma region of the Ghouta pocket, was planned personally by nominated presidential advisor John Bolton and President Donald Trump personally, according to highly placed sources.”

Veterans Today did discuss Rep. Gabbard, as stated, with the Syrian Minister of Justice, when he called us.  He asked for names of American legislators respected by the military who were independent.  I told him I could only think of one, Rep. Gabbard of Hawaii, a combat veteran.

There was never any mention, before or after, of anything that happened during Gabbard’s meetings with President Assad.  In fact, though it now seems the meetings were, in fact, due to our recommendation, we were unaware that the questions asked of us might well lead that direction.

We did, however, attempt to call Rep. Gabbard’s office prior to writing this story, in its original form, which did not include a reference to money paid or American prisoners, to elicit a statement.  That phone call was never returned.

We have many concerns.  Of course, we had no source, there was no source, nobody was at the table and none of our many, almost endless friends in Damascus would have spied on their own leader.

This would have been espionage, not journalism, something that would have undermined the security of American troops and damaged VT, and that’s why we think it was done.

A copy of this article is being delivered to the Syrian Minister of Information and other officials there.  We will, similarly, warn other governments where we maintain news bureaus as well.

We now believe VT was expelled from Turkey under a similar, and now assumed highly successful, illegal intelligence operation that had our staff arrested and subjected to interrogation.

The murder of Jamal Khashoggi was due to, we believe, efforts by the same organization and similar operation.

We believe this same organization used the Washington Post, Newsweek, Politico and The Hill to carry the bizarre story that Veterans Today was running an employment agency to get private information for Russia’s intelligence services.

The FBI thoroughly investigated these claims and found them to be not only false but evidence of something further, broad interference in American media by a foreign intelligence service, not Russia.

That, however, didn’t fit the mold they were told to fill although FBI investigators had every right to think that the WaPo or Newsweek wasn’t utterly fake as Trump has claimed all along.

0 thoughts on “Attack on Rep. Gabbard in April 2018 VT Article Inserted by Hacker”