HOME / WORLD / Who Really Gains from the Gulf Ship ‘Sabotage’ 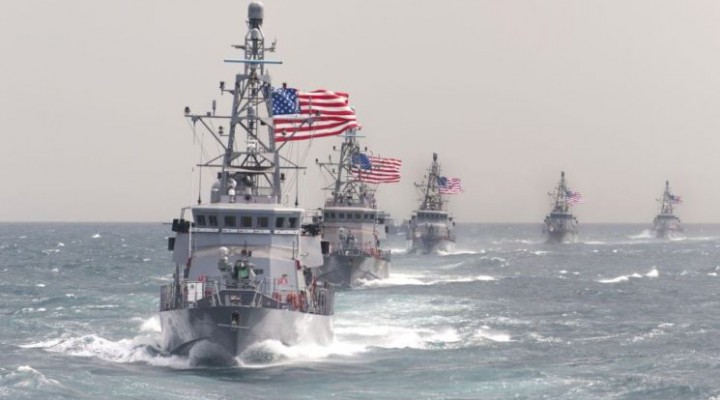 What’s really going on here is another brazen case of reality-inversion. American criminal aggression is, incredibly, again being laundered with a moral license by lying corporate mass media which have the gall to call their blatant war propaganda a “news service”.

After dramatic and patently scripted warnings of “Iranian aggression” by bellicose US officials, there then follows – conveniently enough – an alleged sabotage incident in the Persian Gulf region implicating Iran.

Meanwhile, US Secretary of State Mike Pompeo poses with a straight face that his country doesn’t want war with Iran. His comments warp credulity given that American forces have suddenly escalated firepower in the Persian Gulf for the purpose of “responding” to alleged Iranian infractions.

Typically, Western news media are “reporting” (or rather, “echoing”) the purported sabotage incident as if it were fact, basing their source of information on Saudi and Emirati officials, sources which have a vested interest in creating a war pretext against Iran.

Given the grotesque, barefaced lies that have emanated from the Saudi regime over the past year with regard to the murder of journalist Jamal Khashoggi and also its barbaric, mass executions of political dissidents, it is nauseating how Western media can affect to be so credulous in citing Saudi claims as reliable over the latest alleged shipping incident.

“Two Saudi oil tankers have been sabotaged off the coast of the United Arab Emirates posing a potentially serious threat to world oil supplies,” reports [sic] Britain’s Guardian, attributing the source of this information to the “Saudi government”. What the Guardian omitted was the key word “alleged” before “sabotage”. Notice how the impression given is one of a factual incident of malicious intent. Most other Western news media adopted the same reliance on the official Saudi and Emirati claims.

Tellingly, however, Saudi and Emirati officials gave no details about the “significant damage” allegedly caused to a total of four tankers.

What we seem to know is that the four vessels were somehow disabled off the UAE port of Fujairah early on Sunday. The location at sea is in the Gulf of Oman, which lies outside the Persian Gulf, about 140 kilometers south from the Strait of Hormuz. The latter is the narrow passage from the Gulf of Oman into the Persian Gulf, through which up to 30 per cent of all globally shipped crude oil passes each day.

Last week, Iran once again threatened it would blockade its territorial waters in the Strait of Hormuz “if” the US carried out a military attack on it. Such a move by Iran would throw the global economy into chaos from the anticipated crisis in oil markets. It would also doubtless trigger an all-out war between the US and Iran, with American regional client regimes like Saudi Arabia and Israel piling in to facilitate attacks against Tehran.

So far, there have been no official accusations explicitly made against Iran over the latest shipping incident. But the implications are pointedly skewed to frame-up the Islamic Republic.

Saudi energy minister Khalid al Falih, whom Western media have quoted uncritically, claimed that one of the vessels allegedly attacked was on its way to load up on crude oil from the Saudi port of Ras Tanura, destined for the US market. The Saudi official did not give any substantiating details on the alleged sabotage, but emphasized that it was aimed “to undermine the freedom of navigation”. He called on international action to “protect security of oil tankers”. Wording that the American self-appointed global “policeman” (more accurately, “thug”) invokes all the time to cover for its imperialist missions anywhere on the planet.

When the US warned last week that it was sending a naval carrier strike armada to the Persian Gulf along with nuclear-capable B-52 bombers, it assumed the right to hit “Iran or its proxies” for any alleged attack on “American interests”. The wording out of Washington is so vague and subjective that it lends itself to any kind of perceived provocation.

An oil tanker on its way to collect crude from Saudi Arabia for the US market? That certainly could qualify as perceived Iranian aggression against American vital interests.

Last week, Washington issued hammed-up warnings that “Iran or its proxies” was set to “target commercial sea traffic”. Days later, as if on cue, the alleged sabotage of four ships appears to fit the theatrical bill.

Iran, for its part, has said it would not start a war with the US; that it will only act to defend itself from any American offensive. The foreign ministry in Tehran called the latest sabotage claims “highly alarming” and demanded more clarity from the Saudi and Emirati authorities as to what happened exactly. We can be sure that neither will come clean on that score, given their past record of calumny.

The clarifying question is, of course, who gains from the latest twist in tensions? Certainly, it fulfills American, Saudi and Israeli desires to intensify aggression towards Iran.

Another important question is the location of the alleged sabotage. If Iran wanted to carry out such an operation, it would be much more feasible to do it near the Iranian territorial waters in the Strait of Hormuz. Seriously: how feasible is it for several Iranian commando teams to strike four oil tankers in waters some 140 kms away? Waters that are forensically surveilled by the US Fifth Fleet based in the Persian Gulf.

Suspiciously, as already noted, there is no verifiable information about the alleged sabotage. All we’ve got are claims from Saudi and Emirati officials, the same kind of people who claim journalists disappear into thin air while in consular buildings, or that children in Yemen are slaughtered in air strikes by “mistake”, or that peaceful women protesters from Saudi’s oppressed Shia minority are “terrorists” to be executed by beheading with a sword.

And, shamefully, the Western media tamely go along doe-eyed and gullibly with this risible charade.

Sequencing, timing, sources, agenda and motives plus the dutiful Western media servility. The bets are this a false-flag operation to incriminate Iran.

If it doesn’t result in a pretext for American military attack, at the very least Washington and its Saudi and Israeli clients are trying to make sure the European lackeys are bounced into toeing the line for increasing economic warfare on Iran over the floundering nuclear accord. An international treaty, by the way, which has been torpedoed – verifiably – by American political sabotage.

What’s really going on here is another brazen case of reality-inversion. Compare with contemporaneous US mendacity towards Venezuela, Syria, Cuba, Russia, China, North Korea, and so. American criminal aggression is, incredibly, again being laundered with a moral license by lying corporate mass media which have the gall to call their blatant war propaganda a “news service”.

Indeed, the world is being lied into a potentially catastrophic war by a congenitally criminal US regime.

0 thoughts on “Who Really Gains from the Gulf Ship ‘Sabotage’”