US Leaders Speak With Forked Tongue 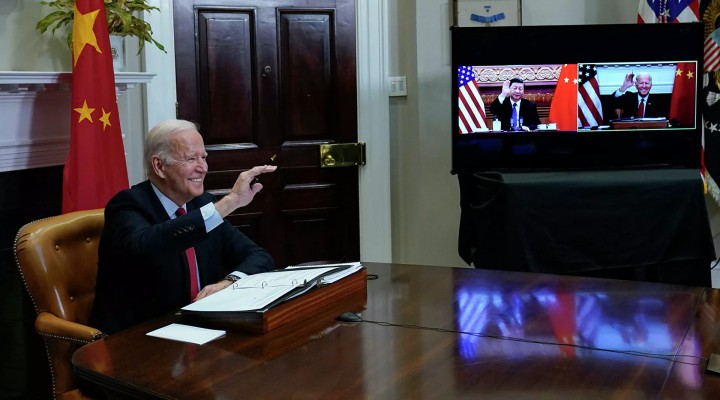 The decision by US President Joe Biden to order a diplomatic boycott of China’s Winter Olympics surely takes the gold medal in hypocrisy and duplicity.

Only a few weeks ago, Biden held a video call with China’s President Xi Jinping in which the two leaders vowed to improve bilateral relations and reduce dangerous tensions.

Telling Beijing now that it will not be sending an official US delegation to celebrate the games when they open in February is tantamount to the Biden administration poking China in the eye. All the more so because of the stated reason being due to US concerns about China’s human rights and allegations of genocide against the minority Uighur population.

The US claims of genocide were also made by the previous Trump administration and his thuggish Secretary of State Mike Pompeo – the ex-CIA chief who boasted about “lying and cheating all the time”.

In any case, Washington’s hyperbolic claims are unsubstantiated and rely on dubious “investigations” by right-wing, anti-China groups who are no doubt politicised by US intelligence agencies.

Nevertheless, such ropey accusations have been used to justify American sanctions on China’s economy as well as ramping up US militaristic threats.

Both Democrats and Republicans have been braying for a boycott of what they have provocatively labelled as China’s “Genocide Olympics”.

The diplomatic snub that Biden has ordered in is a half-hearted sop to the anti-China chorus. American athletes are still allowed to compete in the Beijing games. If there was any principle in Washington’s self-righteous boycott then why isn’t a total ban implemented?

Biden’s duplicity – like Trump’s before him – is partly due to the fact that US foreign policy is held hostage by bipartisan idiots and bigots in Washington who know nothing about the world except for what they are propagandized to “know” by the intelligence services and the corporate news media complex. Biden can’t do anything – even if he wanted – to actually progress relations with China because of the anti-China chorus behind him.

Just take stock of the optics for a moment. Biden has a video conference with Xi claiming that he doesn’t want confrontation or a Cold War with China. A few weeks later, the US president is slandering China with a petty snub over its Olympics. Not a good look for American credibility.

Indeed, the native Americans had it so right centuries ago when they deplored Washington politicians as speaking with forked tongues. They say one thing at one time and then before you know it they stab you in the back. How many treaties of peace with the indigenous nations were torn up to make way for more waves of aggression, theft and genocide?

That point leads to the ultimate hypocrisy of US leaders who continually lecture others about “human rights”. Of course, the ostensible “concern” for such rights by Washington is a cynical pretext for imperialist bullying. But it really is the ultimate arrogance for Washington to browbeat China over specious genocide claims given its own documented and horrific extermination of millions of native peoples.

The rank duplicity of US politicians makes international diplomacy and improvement in relations an extremely difficult, if not impossible, task. How is China supposed to trust Biden when he evidently can turn on a dime from vows of cooperation to petty acts of vituperation?

Same goes for Russia. Biden in a June summit vowed to cooperate with Russian President Vladimir Putin to implement a peace deal in Ukraine by upholding the 2015 Minsk accord. Six months on, the US has increased weapons supplies to the anti-Russia Kiev regime which has repudiated Minsk obligations and is threatening to launch an offensive on the ethnic Russian population of southeastern Ukraine. This is while Washington and its intelligence-media complex promulgate the lie that Russia is threatening to invade Ukraine.

Putin has a follow-up video call with Biden on 7 December. The Kremlin says it will listen with great interest to what Biden has to offer about resolving tensions between the US and Russia over Ukraine and other matters.

Listening carefully is a commendable quality. But as the record amply shows in its relations with China and Russia, US leaders speak with a forked tongue. Whatever they happen to say can be taken with a shovel of salt.

0 thoughts on “US Leaders Speak With Forked Tongue”