HOME / WORLD / Our Rulers Are Not Rational Creatures: Notes From The Edge Of The Narrative Matrix 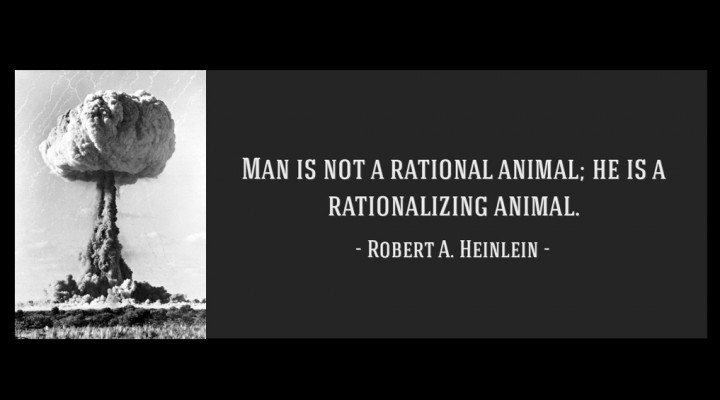 We survived the nuclear horror of the cold war only to see our rulers turn around and start another one for no legitimate reason, this time against two nations simultaneously. And almost no one objected.

The first cold war was colored by a healthy fear of nuclear annihilation, by support for detente in mainstream political factions, and by an understanding that this was a situation we should ideally get ourselves out of as soon as possible. This new cold war features none of these, and is against two nuclear powers, Russia and China, instead of just one. Twice as many unpredictable moving parts. Twice as many things that can go cataclysmically wrong. And this one’s got a whole new dimension of danger in the race to put weapons in space. Our odds here are not good.

I probably won’t feel such an urgent need to keep talking about this as much once I start seeing some real sustained acknowledgement in mainstream circles that there is a very very dangerous game being played here and heroic efforts need to be made to de-escalate it. But right now there just isn’t. Everyone is asleep at the wheel. Nobody’s noticing how dangerous this nuclear tightrope walk is getting.

China is the same kind of country it was during the 2008 Olympics in Beijing. All that’s changed is the level of power it has on the world stage, and therefore the threat level it poses to US planetary domination.

China is building up its military might in correct anticipation of an eventual confrontation with the US empire. The empire’s choices are now (A) abandon the goal of indefinite unipolar hegemony and pursue detente, or (B) orchestrate some kind of massive attack soon before China becomes too powerful to defeat.

I will admit to being more rude to hysterical anti-China types than I am to most people. This is partly because the agendas they’re facilitating are so dangerous, and partly because they’re often a very abrasive combination of stupid and uninformed yet arrogant and condescending. They’ve seriously got the worst low-info/high confidence ratio of any faction I’ve ever encountered.

If this prediction had proved correct, the rapidly tightening Russia-China tandem we're seeing today would never have happened, and China would be far weaker on the world stage as a result. This is the real reason there's been such panicked aggression against both nations lately. https://t.co/1NTlIJH48F

Many Bible verses have done lots of damage over the years, but among the most destructive has been “The poor you will always have with you” from Matthew 26:11. It’s been used often to argue that poverty cannot be eliminated, which at this point in our development is simply false.

As Buckminster Fuller once said, “It is now highly feasible to take care of everybody on Earth at a higher standard of living than any have ever known. It no longer has to be you or me. Selfishness is unnecessary. War is obsolete. It is a matter of converting the high technology from weaponry to livingry.”

Allowing poverty to continue is now a choice. It’s not a choice being made by you or me or any ordinary person, but it is still a choice, being made by the drivers of global capitalism. We could eliminate it, but we don’t, and we accept this as normal because we’re brainwashed.

We could be living in a world where people collaborate with each other toward everyone’s benefit but instead we’re waiting around to find out if we’ll all die in a nuclear holocaust because some neocons convinced everyone in Washington that the US must maintain unipolar hegemony.

“How come you still write about the world like nothing’s changed since Covid?”

Because as far as my line of commentary is concerned nothing has. We’re still hurtling toward armageddon and dystopia just as I was describing before 2020, there are just new justifications and details behind some aspects of that trajectory. We’re still headed for disaster unless the people rise up and use the power of their numbers to turn us away from the trajectory toward doom, and that’s still not going to happen as long as people are being propagandized. This is all still the case just as it was in 2019.

The emotions of the Hot News Story of the Day often make it hard for people to clearly see the horrific nature of the status quo that has already been in place for a long time, the abuses of which have been far, far greater than the Covid-related ones. In terms of abusive systems held in place by propaganda and authoritarian force, the ones we had in place in 2019 dwarf the measures we’ve seen put in place since by orders of magnitude. Many just didn’t notice them because they’ve been conditioned to accept them as normal.

A big part of what I do here is try to help people see the mundane horrors of the status quo with fresh eyes. If someone was teleported here from an alternate Earth with a healthy society, they’d never stop screaming.

Leftists who spend a lot of energy conformity-policing the online left are admitting that they’re only in this for the egoic currency of social media reactions. There’s no other reason to look at our world’s problems and decide that’s the most useful expenditure of your energy. If you look at the dire straits humanity is in and then decide you’re going to spend your time and energy calling Jimmy Dore a fascist or Max Blumenthal an anti-vaxxer or whatever, you’re admitting you’re not in this to make the world better. You’re not interested in fixing this thing.

The US opposes legally binding restrictions on the use of lethal autonomous weapons because its plans for the future involve widespread use of those weapons.https://t.co/JymwgHeITN

The most powerful people in our world pursue power for its own sake and do so with amoeba-like levels of wisdom and insight. Don’t attribute any higher order of decision-making capability to them than you would to any random acquaintance in your life. If anything, attribute less.

Most people are deeply unconscious and patterned. Ruling elites are no exception, and in fact they are more unconscious. It’s a common error to think of these people as rational actors; really their minds are running on autopilot in response to conditioning put in place long ago.

That’s why you’ll see them continuing policies which destroy the biosphere they depend on for survival or escalating military aggressions between nuclear powers. They’re not making cool, rational decisions, they’re acting out impulses within themselves that they don’t understand.

You’ll hear people say “They wouldn’t nuke themselves, it’s irrational” or “If the climate situation was really that bad they’d have taken drastic action long ago,” but this assumes you’re dealing with rational minds and not what are essentially neurological computer programs. Really you’re just looking at highly traumatized organisms mindlessly acting out patterns set in place much earlier in their lives to cope with distress and gain a feeling of safety and security. And virtually none of those patterns are useful for running the world in a sane way.

Any analysis which holds that elites wouldn’t do something simply because it’s not rational is an analysis which omits the important fact that, as Robert Heinlein put it, “Man is not a rational animal; he is a rationalizing animal.”

These people are not gods. They’re barely even humans.

It’s not true that beauty is in the eye of the beholder; the absence of beauty is. Beauty is everywhere; it’s the natural, default state of perception. The inability to see beauty in something is the result of mental projections added onto that natural state by the beholder.

One thought on “Our Rulers Are Not Rational Creatures: Notes From The Edge Of The Narrative Matrix”