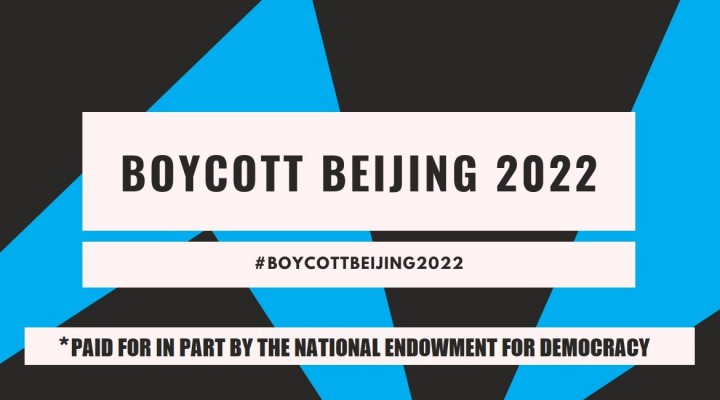 A syndicate of interconnected NGOs funded by the US government and hellbent on Balkanizing China is behind the #BoycottBeijing2022 campaign.

The United States’ regime change arm, the National Endowment for Democracy, has funded at least half of the groups involved in the media offensive. Other groups involved are otherwise tied to the national security state.

On Monday, the Associated Press ran a story about the campaign with the sole exclusive source coming from an organization that got $272,300 from the National Endowment for Democracy for the years 2016 through 2019.

The AP story claimed the charge was being led by a “coalition representing (emphasis mine) Uyghurs, Tibetans, residents of Hong Kong and others” pushing for a full scale boycott of the Beijing Winter Olympics scheduled for 2022.

The US gov't-funded regime change activist outlines the strategy:

– make the Int'l Olympic Cmte's wallet bleed by ratcheting up pressure against their sponsors pic.twitter.com/MVLajHLNLI

Senior Researcher at the Tibet Action Institute Tenzin Dorjee recently took to the Washington Post amid escalating attacks on Asian-Americans to call on the Chinese government to apologize to the world for its response to the coronavirus and in September of last year testified before the Congressional Executive Commission on China (co-chaired by Senator Marco Rubio). With a portrait of the Dalai Lama in his backdrop, he claimed China was waging a “violent” campaign to “eradicate” the Tibetan way of life.

Tethong, AP’s sole exclusive source for their story headlined “AP Exclusive: Full-blown boycott pushed for Beijing Olympics,” said the coalition is trying to recruit athletes that have publicly supported the Black Lives Matter movement and that their method of exerting pressure on the International Olympic Committee is by pressuring its sponsors.

“Participating in the Beijing Olympic Games at this time would be tantamount to endorsing China’s genocide against the Uyghur people,” the coalition says on its website.

“The Chinese government is committing genocide against the Uyghur people,” the coalition claims, continuing on to cite “repression” in so-called East Turkistan (a separatist designation for the Muslim-majority Chinese province of Xinjiang), and more of the same in Tibet, “Southern Mongolia” (another Chinese province) “as well as an all-out assault on democracy in Hong Kong.”

"It would be terrible for democratic groups around the world to be seen as subsidized by the CIA… that's why the endowment was created." – NED founder Carl Gershman

“A lot of what we do today was done covertly 25 years ago by the CIA.” – NED founder Allen Weinstein

The National Endowment for Democracy (NED) was sectioned out of the CIA so that the US government could save face by distancing its funding to civil society activist groups working for US hegemonic interests from the agency. I was the first reporter to expose the NED’s funding towards many of the groups involved in the coalition leading the riots in Hong Kong in 2019.

According to the NED’s grant search, which is often lacking entries for grants the organization hands out, they have put $3,049,677 towards organizations for projects focused on Tibet for the years 2016 through 2019.

While AP fails to mention that the organization Tethong belongs to — the Tibet Action Institute — is funded by the NED, the list of members of the coalition, from their own website, uncovers even more shady ties.

The NED gave the World Uyghur Congress $1,284,000 for the years 2016 through 2019; $330,810 to Students for a Free Tibet in the same timeframe; the Southern Mongolia Human Rights Information Center says it has received funding from the NED, however the grant is not recoverable via the NED’s website.

With an office in London, the World Uyghur Congress is headquartered in Munich, Germany. Ajit Singh reported for The Grayzone that the outfit maintains a “network of 33 affiliates in 18 countries around the world” and has received NED backing “from its inception.” The group’s first president called for the fall of China and prior to leading the organization worked for the US propaganda outlet Radio Free Europe/Radio Liberty.

Founded in New York City, the NED-funded Students for a Free Tibet brags on its website that it has “led campaigns that have cost the Chinese Government billions” and accuses China of “genocidal projects in Tibet.” The group has been endorsed by Representative Alexandria Ocasio-Cortez.

I went to a Uyghur separatist rally outside the Chinese embassy in Washington, DC.@RushanAbbas and @EIltebir told me millions of Uyghurs are in Chinese "concentration camps."

Their source? The US government.

The website goes on to note that Abbas “worked closely with the US Department of Defense, Department of Justice, State Department, and US administration [sic]” and highlights her 11-year stint working as a translator at the US prison camp Guantanamo Bay.

We the HongKongers is, ironically, also based in the United States, as is the Southern Mongolian Human Rights Information Center.

It’s difficult to find information about China Against the Death Penalty as it maintains no website or social media accounts. Keep Taiwan Free’s Facebook page is run out of both Taiwan and the United States. However, it appears they are based out of New York, as their “Merchandise” page says “you are in the greater New York area, the best way to get the widest selection of items is by contacting us directly.”

Rather than being an organic movement to fight repression by the Chinese government, the “Boycott Beijing 2022” coalition appears to be yet another AstroTurf movement orchestrated by US government lackeys to chip away at China’s transcending presence on the world stage.

Did you enjoy reading this article? I value the free exchange of information, so I don’t put anything behind a paywall. Consider kicking me a few bucks on PayPal to support my independent reporting or becoming a patron.

Alex Rubinstein is an independent reporter on Substack. You can subscribe to get free articles from him delivered to your inbox here, and if you want to support his journalism, which is never put behind a paywall, you can give a one-time donation to him through PayPal here or sustain his reporting through Patreon here.