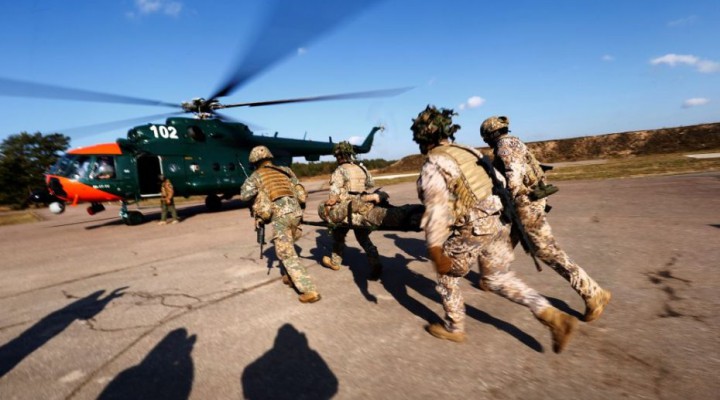 Despite its charter proclaiming mutual defense and security, the NATO military alliance is showing a rather unbecoming dog-eat-dog individualistic reaction in coping with the coronavirus pandemic.

The United States, the top dog in the 30-member pack of nations, is accused of “modern piracy” after it nabbed consignments of face masks which were bound for allies Canada, France and Germany to help those nations fight against soaring epidemics of the disease.

To think too that only last year, NATO celebrated the 70th anniversary of its founding in 1949 with lots of fanfare and vain self-congratulations of how noble the alliance is. Skeptics, though, see the bloc as a Cold War relic whose security claims are but empty Orwellian excuses for warmongering and propping up obscenely wasteful corporate militarism.

The latest incident involved the alleged commandeering of 200,000 anti-infection surgical masks by the US which had been originally ordered by German authorities for police officers in Berlin. The shipment was intercepted in Thailand and directed to the US instead.

It appears that the US firm, 3M, which sources the facial masks in China, was mandated by the Trump administration to increase its exports to the US due to the emergency circumstances of the Covid-19 pandemic, thereby over-riding the transaction with Germany.

There have been similar reports of medical equipment bound for Canada and France also being intercepted by US authorities. Last week, a planeload of masks about to take off from Shanghai for France was bought up by American officials who turned up at the airport at the last minute wielding wads of cash.

Washington has denied the American actions are underhand. Well, maybe not underhand, but the Wild West-style capitalism of outbidding others with bigger bucks over life-saving medical material certainly seems unethical. And what about all that jive about mutual defense and security? Where’s the fraternal coordination in a crisis?

It’s not just the US which is seen as saving its own skin in a panic. Germany and France have also imposed export bans on their companies sending medical supplies to other European countries. That has led to grievances voiced by Serbian leader Alexander Vucic and others complaining that there is no European solidarity.

Even European Commission President Ursula von der Leyen was obliged to rebuke EU states for not displaying sufficient solidarity and for closing off borders and supplies to others in need from the pandemic.

In Italy and Spain, where deaths have soared above 10,000 in recent weeks, there has been popular outrage over the lack of collective response from European and NATO allies.

Given the rapidly growing threat to public health from the Covid-19 pandemic it is understandable that nations are taking desperate measures. From an initial indifference towards the disease in the US, the authorities there are now increasingly fearful that the infections and death toll may spiral out of control.

Last week, the global infection number surpassed one million with more than a quarter of those being in the US. The American death toll may peak at multiples of what we have seen in China or Europe. This is especially because of the deprived social conditions of American workers and due to under-resourced for-profit public health services.

Coming in an election year, President Trump is seeing his reelection hopes potentially going up in smoke along with the economy hit by coronavirus. That no doubt compels his administration to pull out all the stops to contain the pandemic, which would explain the snatching of vital medical equipment from allies.

No doubt too that was why Trump gratefully accepted medical aid sent from Russia last week. The US has also received supplies from China. Which puts into perspective how tawdry are American sanctions on Moscow and Trump’s trade-war wrangling with Beijing is.

Russia and China have both despatched medical aid to Italy to help it cope with the crisis. The Italian government and public have acknowleged the show of solidarity with gratitude.

Ironically, and cheaply, some US media outlets and European parliamentarians have accused Russia and China of exploiting the pandemic for alleged propaganda purposes. It is claimed that Russian and Chinese media are spreading disinformation over Covid-19 with the objective of undermining NATO and the European Union. That’s just another iteration of the usual anti-Russia mentality which is fixated on the notion of a supposed Kremlin plot to “destroy Western democracies”.

NATO and the EU are doing a pretty fine job of undermining themselves, never mind purported input from Russia or China.

The only time NATO seems to show “solidarity” is when its member-nations attack and destroy weaker foreign countries like Afghanistan, Iraq, Libya, Syria and Somalia – at the behest of top-dog USA. When the chips are down, however, and survival instincts kick in, then it’s dog-eat-dog with a snarling “Screw You!”

The saga of stealing masks from one another is surely truth-by-parody.