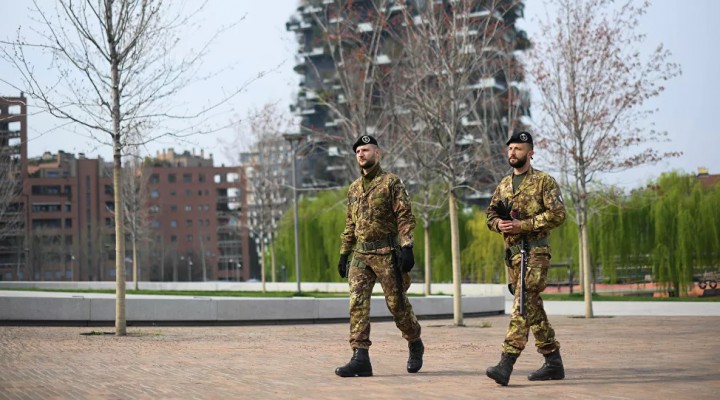 In a White House briefing this week on the coronavirus pandemic, President Trump went off script – as usual – to rant about NATO allies “not spending enough” on military budgets and “playing games” with the US over defence.

It’s hard to know what prompted Trump to dredge up this bugbear. It appears to be related to his questionable notion that European countries are not buying more medical equipment from the US. Trump routinely complains that the European Union is taking advantage of the US in matters of trade, or by being overly reliant on America for military defence.

However, just why Trump should go on a rant about NATO at this precise moment seems decidedly insensitive. Europe has become the global epicentre for the coronavirus pandemic. Italy and Spain have the highest death tolls worldwide, with nearly 7,000 and 3,500 fatalities, respectively.

There are genuine fears that the death rates across Europe will accelerate in the coming weeks and months due to public health services being overwhelmed.

The spectre of the deadly virus is haunting the US too. World Health Organization officials predict that America will become the new epicentre following Europe’s outbreak. Potentially, the death toll in the US could run into the millions.

Trump’s insensitive comments about NATO allies show a lamentable lack of international solidarity. They also betray a damning indictment of this president’s role in boosting military spending by European NATO members – an expenditure that is not only wasteful but which has left these countries vulnerable to the present public health crisis.

What the coronavirus and its Covid-19 disease have exposed is the reprehensible underfunding of public health services by Western states. The lack of hospital equipment such as ventilators and protective gear for medical workers is greatly exacerbating the spread of the disease and the death toll.

Spain is reportedly now spending €430 million ($470m) to obtain medical equipment from China in a desperate attempt to contain a runaway epidemic. Many other countries are in the same predicament. Trying to hastily increase medical facilities and personnel levels which have been let deteriorate over years from chronic underfunding.

(The US is no better, if not in a worse state of public health service neglect. New York City needs 30,000 ventilators to treat virus patients but only has 7,000 machines.)

In this context, it’s far from tangential to point out that Spain, Italy and other European countries have been splurging billions of dollars more every year on military procurement in recent times. That is because of Trump’s hectoring of America’s allies to spend more on NATO. A lot of that extra money actually ends up propping up the US military-industrial complex in the form of purchases of warplanes and missile systems.

Trump wants – and boasts about it too – European NATO members to spend an extra $400 billion on the military by the year 2024. His regular shaming of them for allegedly “taking advantage” of the US for defence is part of this extortionate shakedown.

The same pattern of a spike in military spending is seen for other European states – all in response to Trump’s boorish demands for these nations to increase “NATO commitments”, which is a euphemism for subsidizing America’s military-industrial complex.

The fact that European nations have meekly acquiesced to Trump’s bullying speaks of the servile nature of their governments towards Washington.

Just think: if Spain, Italy or any other European nation had invested the billions of dollars they wasted on the military to rather instead improve their public health services then the current coronavirus crisis would in all probability not be a crisis. It would be contained by a capacious and well-funded public health system.

That is why Trump’s bilious attacks on European so-called allies is so sickening. He is not only kicking them when they are down. They are down in large measure because of Trump’s bullying and racketeering over obscenely wasteful military spending on NATO. How bitterly ironic too. Spending excess billions on security and defence has left Europe (and America) completely wide open to attack and disaster.

NATO’s Defender Europe 20 exercises only increase chances of war with Russia, not diminish them