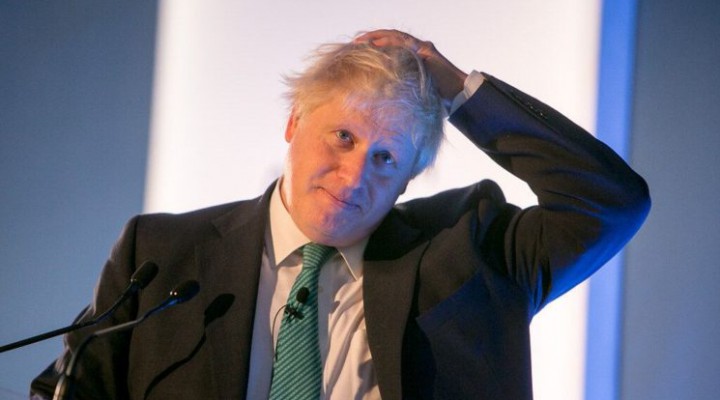 Britain’s Prime Minister Boris Johnson showed his true colors this week when he led the collapse of European support for the nuclear deal with Iran.

Britain’s Prime Minister Boris Johnson showed his true colors this week when he led the collapse of European support for the nuclear deal with Iran. What’s more, it was pathetically evident that Johnson was pandering to US President Donald Trump.

Since the clownish figure of “Boris” took over Downing Street in July, it was predictable that the hapless Johnson and his wobbly Brexit ambitions would make him ever-more reliant on the American president in order to negotiate a post-Brexit trade deal with the US. That, in turn, would mean Johnson being more sycophantic than British leaders usually are in indulging the White House and its foreign policy goals.

This week, predictions of Johnson’s kowtowing to Trump were fully delivered on, when he stabbed the nuclear accord with Iran in the back. On the way to the UN general assembly in New York, he declared it a “bad deal”.

It was an extraordinary U-turn by Britain which up to now had endorsed the Joint Comprehensive Plan of Action (JCPOA), the formal name for the nuclear deal, along with Germany, France and the European Union, as well as Russia and China. The accord was signed in 2015 by all of the above plus the US with the aim of lifting economic sanctions off Iran in return for curbs on its nuclear program.

When Johnson was previously British foreign secretary (2016-18) he fully supported the JCPOA in line with the European bloc, Russia and China. Up until this week, it was the US which had alone defied international consensus after Trump unilaterally reneged in May last year on America’s signature to the UN-endorsed nuclear treaty.

Now Britain’s Johnson has thrown his weight behind Trump’s repudiation of the accord. For the British premier to disparage the landmark nuclear agreement as a “bad deal” was an astounding turnaround in London’s policy. The British have gravely undermined the international consensus by pandering to Trump’s rhetoric about the JCPOA being “the worst deal ever” requiring renegotiation with tougher and wider restrictions imposed on Tehran.

The creepiness of Johnson is something to behold. Asked about the JCPOA on route to the UN, he said: “The reality is, as President Trump rightly said, it was a bad deal. It had many defects. Iran was and is behaving disruptively in the region. If it was a bad deal – and I’m willing to accept that, it had many, many defects – then let’s do a better deal. And I think there’s one guy who can do a better deal and one guy who understands how to get a difficult partner like Iran over the line and that is the president of the United States.”

As if he couldn’t ingratiate himself any further, Johnson then went on to describe Trump as a “very, very brilliant negotiator.”

And, of course, Trump, the fragile egomaniac that he is, was suitably delighted by those saccharin words. He lavished praise on his “good friend” Johnson, calling him “smart” and “a winner”. (Despite a supreme court in Britain this week sanctioning Johnson as lawless and a fraud for suspending parliament.)

For Washington, the sterling service Johnson is providing is to unravel the JCPOA in accord with how the American president dictates it should be. It is a wonder how the US and now Britain are allowed to unilaterally abandon international obligations based on spurious assertions.

The day after Johnson’s jumping tricks for Trump, the European Union was next in line for acting the fools for the Americans.

Britain, France and Germany – the so-called E3 – issued a joint statement in which they condemned Iran for carrying out air strikes against Saudi Arabia’s oil industry. Johnson had come to that dubious conclusion the day before without providing evidence. It was clear from his bluster that he had no evidence whatsoever but was merely parroting the Washington “highly probable” trope. Now though, the E3 were also endorsing the same accusations against Iran, again without any substantiating details to support their provocative claims of Iranian aggression.

Furthermore in their joint statement, it was also evident that France and Germany were shifting significantly towards the US and British position of repudiating the nuclear accord.

The statement read in part: “We reiterate our conviction that time has come for Iran to accept negotiation on a long-term framework for its nuclear program as well as on issues related to regional security, including its missiles program and other means of delivery.”

In addition, rubbing salt into wounds of insult, the European countries urged Iran to get back to diplomacy and to “refrain from choosing provocation and escalation.”

By going along with the US, British and Saudi demonization of Iran over the oil industry attacks on September 14, rather than investigating claims by Houthi rebels that they were responsible and not Iran, the French President Emmanuel Macron and German Chancellor Angel Merkel are paving the way to collapse the JCPOA entirely.

Note how their call for a “longer-term framework for [Iran’s] nuclear program” and monitoring of “[Iran’s] missiles program” is tantamount to aligning with Trump’s demand for the JCPOA to be scrapped and renegotiated. No doubt, if it comes to that, the terms enforced on Iran will be even more onerous and intrusive than they already are under the existing nuclear accord. The bad faith and duplicity here shown by Western powers is staggering.

Following the joint statement by Britain, France and Germany, Iranian President Hassan Rouhani slammed the “baseless” allegations against his country as “destructive”.

Notably too this week, US-backed Saudi air strikes killed at least 20 civilians in Yemen, including seven members of a family taking shelter in a mosque. Yet, Britain, France and Germany “condemned” Iran for aggression while stating “solidarity with the kingdom of Saudi Arabia.”

With mealymouthed duplicity, the Europeans said they continued to support the JCPOA. But it is patently obvious they are doing their best to eviscerate the accord.

Iranian foreign ministry spokesman Abbas Mousavi said of the European joint statement: “The statement showed that the European parties have no strength or willpower to counter US bullying.”

He said that the JCPOA has been in a dead-end since Trump’s withdrawal in May 2018 because of European “paralysis”.

What Britain’s Boris Johnson has done is obey his master’s voice in Washington and bring the European minions into the Trump fold of sabotaging the nuclear agreement. It’s a time-honored function of Britain-the-butler to serve US interests for hegemonic control over European affairs.

Incredibly, given all the damage and chaos inflicted on Europe by Johnson’s Brexit shambles, it is apparent that clueless European leaders can nevertheless be still played along for fools by Uncle Sam’s court jester in London.

Inviting Israel into the Gulf

US Axis of Aggression in Gulf