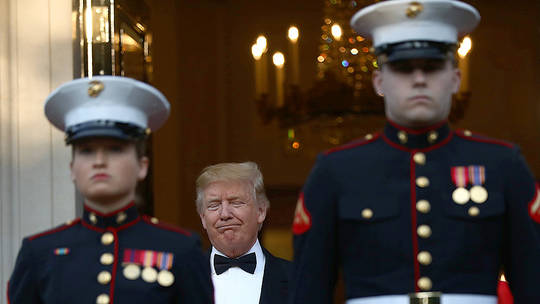 It’s more than coincidence that on the first day of US National Security Advisor John Bolton’s visit to London this week, Britain announced the dispatch of another warship to the Persian Gulf.

Ahead of Bolton’s visit to London, Washington was pointedly making it clear in media reports that a future US trade deal with Britain was dependent on Johnson’s government being more amenable to America’s policy of pressuring Iran and China.

It won’t stop there either. The implication is for an open-ended demand by Washington for British compliance on other foreign policy interests. That is, for Britain to be more compliant than it usually is.

Earlier this month, US leverage on Britain was succeeding. On August 4, London announced it was formally joining the US maritime mission Operation Sentinel, purportedly aimed at protecting commercial shipping in the Gulf, where tensions have been escalating with Iran over alleged sabotage incidents.

Before Johnson took over in 10 Downing Street on July 24, the government of predecessor Theresa May had declined the idea of joining a US-led maritime mission. Then-Foreign Secretary Jeremy Hunt, whom Johnson later ousted, had instead pushed the plan for a European-led naval protection force in the Gulf, separate from US deployment.

Now the Johnson government is rowing in behind the US maritime force. London is evidently complying with Washington’s demands for a more aggressive policy towards Iran. Ominously, there are also reports of Israeli involvement in the US-led mission.

Iranian Foreign Minister Mohammad Javad Zarif this week slammed the US and its allies for creating a “tinderbox ready to blow up” by “pouring weapons” into the region. He said more warships in the already congested waters of the Persian Gulf will increase insecurity and risk of confrontation.

Why Britain appears to be gung-ho in its support for US militarism in the Gulf is directly tied up with Johnson’s concerns over Brexit and his need to curry favor with the Trump administration for a post-Brexit trade deal.

Johnson and his hardline Brexit cabinet are set for a no-deal departure from the European Union by October 31. A so-called ‘hard Brexit’ crash out of the EU will likely cause huge economic turmoil for Britain. Nearly half of all British exports and imports are with the 28-nation bloc. That equates to about £630 billion (US$760bn) total annual trade between Britain and the EU.

Without a withdrawal agreement, or ‘soft Brexit’ (which Theresa May foundered on), Britain will suddenly find itself in the global economic cold of World Trade Organization rules as a single-trading nation. The impact on British manufacturers, financial services, and agriculture could be severe from the swift imposition of EU customs and trade tariffs.

That’s why Johnson’s swashbuckling Brexiteer government, with its high-handed approach to Brussels, is so keen to establish a trade pact with the US as a vital matter of compensation for its losses with Europe. The task will be onerous. Current US-British bilateral trade is worth about $262bn (about a third of EU-UK trade.)

Johnson and his ‘make Britain great again’ concept of Brexit – based on a romantic renaissance of British global power – is thus totally reliant on ingratiating London with Washington. The so-called ‘special relationship’ has always been about Britain kowtowing to the US. But henceforth the kowtowing will be even more obsequious.

It seems patently obvious that the Trump administration is dangling desperately needed trade opportunities in order to extract “services” from London so as to facilitate Washington’s foreign policy objectives.

Bolton repeatedly endorsed the hard-Brexit plan and emphasized that a future trade deal with the US would be “accelerated.” But the implicit quid pro quo was for London to align more closely with Washington’s aggressive policy towards Iran and China.

There is also plausible suggestion that the Trump administration is pushing Britain to follow its steps in abandoning the international nuclear accord with Iran. That would signal a sharp rupture with the EU position of supporting the Joint Comprehensive Plan of Action, and no doubt further intensify tensions with Iran.

The curious mix of issues related to Brexit, finance, trade, and international security during Bolton’s high-profile meetings in London this week points to a “price” being demanded of Britain for future US trade favors.

In this way, the sycophancy of the British government towards the Trump administration and its dubious Brexit ambitions make for an emboldened US foreign policy, which could in turn inflame international tensions. We are already seeing a rapid heating up with regard to Iran from seemingly more militaristic deployment in the Persian Gulf by the US and Britain.

Another policy area which the Trump administration made contingent on future trade prospects was Britain taking a more adversarial position towards China, in line with the White House’s trade war with Beijing.

Bolton told Johnson’s government that Washington wants Britain to scale back on previous plans to partner with Chinese telecoms giant Huawei in building digital infrastructure across Britain. That is in line with the Trump administration trying to hamper China’s trade and investment with Europe and more globally. Britain has already voiced a shared concern with the US over the alleged “national security risk” from Chinese access to telecoms networks.

If this analysis is correct that Washington is exploiting trade incentives to lever tougher British foreign policy, then one may anticipate the Johnson government moving towards imposing sanctions on Huawei and generally trying to impede China’s access to Britain and Europe’s telecoms market.

Another anticipated British response would be ramping up Washington’s pressure on China over the ongoing protests in Hong Kong. Beijing has alreadyhit out at what it says is “interference in its internal affairs” by Washington and London’s support for demonstrations against Beijing’s sovereignty over the former British colonial enclave.

Unlike Iran, however, pandering to Washington over China could put London in an awkward dilemma. Soon after becoming prime minister, Boris Johnson made a big pitch for boosting economic trade ties with China. He said Britain was “enthusiastic” about China’s Belt and Road Initiative of global economic planning. To be sure, this was Johnson hedging his bets for Britain’s post-Brexit trade needs.

A test of how far Britain is prepared to indulge the Trump administration will be Johnson’s relations with China. At around £67bn ($81bn), Britain’s annual bilateral trade with China is only a fraction of that with the EU and US. Johnson may therefore decide his bets are better by toeing the line with Trump, even if that means antagonizing China.

Thus, Britain’s lapdog role for American imperialism is set for a lot more snarling at other nations in order to earn its promised US trade prize.