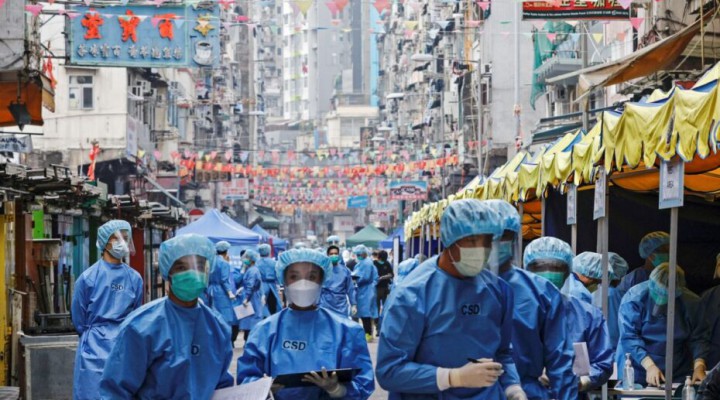 When President Joe Biden ordered his intelligence agencies to probe the origin of the Covid-19 virus, it looked like a frame-up job was underway to finger China as being responsible for the global pandemic.

Back in May, Biden gave the U.S. intelligence community 90 days to investigate the possibility that the SARS-CoV-2 virus which causes the Covid-19 disease was released by a microbiology laboratory in the Chinese city of Wuhan.

China has consistently rubbished the U.S. innuendo as “pre-determined” and unscientific. Beijing points out the absurdity of employing spies to solve a scientific issue of immense complexity. The American politicization of a scientific matter inevitably thwarts appropriate international cooperation to defeat the pandemic and any future ones.

The U.S. spooks published their conclusions last week in an unclassified version of their report issued by the Director of National Intelligence which heads up 17 agencies. The majority conclusion was that the virus originated in nature and infected humans via an animal vector. It was explicitly stated that U.S. intelligence assessed that the virus was not a “bioweapon”.

Thus, the Washington establishment appears to be conforming to the international scientific consensus about the pandemic. Washington appears to be stepping away from the unhinged “theory” that the previous Trump administration and hawkish Republicans had promoted which sought to pin the blame for the pandemic on China. Recall that Trump and his thuggish Secretary of State Mike Pompeo had accused China of destroying “the greatest economy the world has ever seen” and insinuated that the sabotage instrument was a biological weapon released by the Wuhan Institute of Virology.

Under Trump, the U.S. media had scoffed at his anti-China claims. However, under Biden, the new Democrat president revived the reckless theory by tasking intelligence services to look into it. And the fickle, dutiful U.S. media went along with the U-turn by appearing to give the “lab leak theory” plausibility.

The intelligence agencies are now disavowing that notion. In other words, they are saying there is “no smoking gun” implicating China in weaponizing a virus and that the pandemic originated from a naturally occurring outbreak of disease.

This U.S. assessment may be seen to be partially welcome. If the spooks had ostensibly concluded that the virus was a result of a bioweapon lab leak, then the consequences would have been potentially catastrophic. For that would have implied that China had conducted an act of war by stealth to destroy the American economy and cause over 630,000 deaths – by far the biggest national death toll worldwide.

In that regard, Biden’s 90-day intelligence report had disturbing resonance with the infamous weapons of mass destruction (WMD) narrative concocted for launching the war on Iraq in 2003 under George W Bush. The WMD intelligence was later shown to be baseless. The Americans and British politicized (fabricated) intelligence to enable a genocidal war against Iraq – the heinous legacy of which reverberates to this day. Again, the corporate-controlled news media were complicit in selling that false narrative and therefore are complicit in monumental war crimes.

There was a danger that we were witnessing a similar propaganda charade over China and the “lab leak” theory. If the U.S. intelligence had fingered China for the Covid-19 pandemic, the supine Western media would have performed their usual prostitute function. Beijing’s protestations would no doubt have been dismissed. The result would have had grave implications for a military confrontation – at a time when tensions between Washington and Beijing are already fraught.

So what happened? It seems that the Washington establishment knew that it had to step back from the reckless frame-up of China. The logic was leading to the abyss of military confrontation. Unlike Iraq in 2003, China is a formidable power that is actually defended with nuclear weapons.

But also there is the awkward factor of scientific evidence and objective truth. In the case of setting up Iraq, the U.S. spooks had imaginative freedom. They could plausibly claim to identify nuclear or chemical weapons from ambiguous satellite imagery. Back then, too, Secretary of State Colin Powell could hold up a glass vial of white power in front of the United Nations Security Council implicitly threatening that if he dropped it on the floor everyone in the chamber would die from anthrax infection. Turns out Powell was probably brandishing a sample of washing powder.

Such a devious ploy is not possible in an attempt to incriminate China over the Covid-19 pandemic.

To push the lab leak theory of a bioweapon, the U.S. would have had to provide genetic data of the pathogen and attribute the data to the Wuhan Institute of Virology. But scientifically it is not feasible to fraudulently fabricate genetic code. A bioweapon is a synthetic product whose genetic sequencing indisputably shows techniques of microbiological engineering. A virus that originates in nature will show a natural evolution of its genetic composition.

The U.S. spooks could never concoct such genetic evidence. It is not scientifically possible. Furthermore, the Chinese microbiologists would, of course, have copies of genetic data pertaining to all the viruses they are studying and researching. Any attempt by the Americans to falsify would be absolutely and verifiably exposed.

The whole lab leak theory was always a ridiculous errand for U.S. intelligence. Most scientists, including an international team from the World Health Organization in cooperation with Chinese experts, have concluded that the Covid-19 virus originated naturally and infected humans via an animal vector. The WHO team concluded that it was “extremely unlikely” that the virus came out of the Wuhan laboratories, either as a bioweapon or from the accidental release of natural virus samples.

While most of the U.S. intelligence agencies have realized the politicization of the pandemic is a dead-end, nevertheless, one of their ranks is cited in the 90-day investigation as contending that the Covid-19 virus may have been released as a natural pathogen in an accident at the Wuhan Institute of Virology. This assessment is not the full-on incrimination of China. But it does still imply a degree of culpability for the ongoing global pandemic. If not a smoking gun, the Americans are resorting to using a grease gun to smear China.

Beijing and many scientists around the world have condemned Washington for politicizing the origins of the pandemic. It is a futile and unscientific hoax to blame China. What’s more, this dangerous distraction is preventing a proper international effort to study the origins of the SARS-CoV-2 virus which is essential for defeating future pandemics.

It also serves as a distraction from valid calls to investigate the possibility that the Covid-19 disease may have originated in the U.S. or Europe months before the first cases were reported in China’s Wuhan in December 2019. Laboratory releases from U.S. biowarfare centers such as at Fort Detrick, Maryland, involving natural virus samples is a valid concern for an international investigation. But handily for Washington, its grubby politicization of the pandemic serves to hinder such investigation. It would rather smear China than have an honest scientific and open probe into the origin of the pandemic.