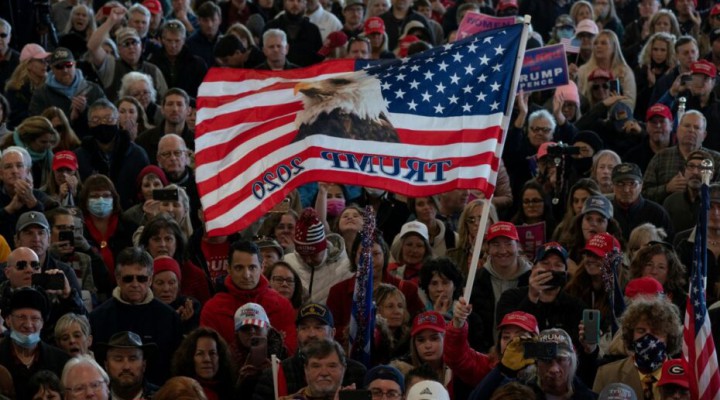 Professor Colin Cavell surveys the beleaguered political landscape in the United States. He says one has to go back to the Civil War years to find a comparison to the present political turmoil.

In God We Trust, is a slogan emblazoned on every American dollar bill. Well, that may be or may be not the case. But certainly Americans no longer trust their political system, as evidenced by the unholy fiasco of the last presidential election. Nearly half of those who voted believe that their man, Donald J. Trump, the former reality-TV star, real estate magnate-turned politician, was the winner who was cheated by electoral fraud. Meanwhile, the president-elect Joe Biden is shaping up to deliver four more years of massive social inequality at home and hostility around the world, towards Russia in particular. In an interview below, Professor Colin Cavell surveys the beleaguered political landscape in the United States. He says one has to go back to the Civil War years to find a comparison to the present political turmoil. An important observation, he notes, is that trust in American politics is at an all-time low, which in turn presages a phenomenal surge in conspiratorial thinking that is totally removed from dealing with reality. And, ominously, stoking war abroad might be the only way the American capitalist system can “unite” the nation and salvage its dire condition.

Question: The last US presidential election seems to have been unprecedented in its controversy and bipartisan bitterness. In your long view of American history, has there been anything like the turmoil that has swept over the US in recent months?

Colin Cavell: Yes, the election of 2020 is, perhaps, as bitter and divisive as the presidential campaign of 1860 where the Republican Party platform argued against the expansion of slavery into the territories of the United States. Presaging the impending rupture of the Union, the Democratic Party ended up holding three different conventions, one in Charleston, South Carolina – which adjourned due to its inability to reconcile the Supreme Court’s 1857 Dred Scott decision, which declared that the Constitution protected slavery in all United States territories, with the more moderate position of presidential candidate Stephen A. Douglas who had advocated in the 1854 Kansas-Nebraska Act his doctrine of “popular sovereignty” allowing settlers in each territory to decide whether to allow slavery or not. A pro-slavery southern delegation walked out of the Convention when the party refused to include in its platform a plank stipulating that no government had the power to outlaw slavery in the territories.  Douglas ended up garnering the presidential nomination in the reconvened Democratic Convention further north in Baltimore, Maryland three weeks later only to have the more pro-slavery delegates bolt from this second convention and meet in a third Democratic Convention, also in Baltimore, to put forward the presidential candidacy of John C. Breckinridge while proclaiming in its platform to defend the right of United States citizens “to settle with their property” in United States territories, “without their rights, either of person or property, being destroyed or impaired by Congressional or Territorial legislation”. Thus, while the continuation or abolishment of slavery stood at the apex of the national debate in the 1860 presidential campaign, Abraham Lincoln rode to the office of the Presidency by proclaiming to preserve the Union.

The 2020 U.S. Presidential election pitted Donald J. Trump – a narcissistic capitalist able to mobilize a cult following against Joe Biden – considered a stable representative of corporate capital.  Though the electoral count favored the ticket of Biden and his vice-presidential candidate Kamala Harris, the Trump-Pence team assailed the vote-count as fraudulent, thus calling into question the democratic foundation of the United States. And while Trump has attempted to overturn the election through over 60 legal court suits, on the premise that the election was fraudulently conducted and votes tallied, all of which were dismissed, he continues this effort as we head towards the inauguration date of January 20, 2021 for the next president. For his part, Biden strives to act as a voice of reason, sanity, stability, and the legitimate president necessary to preserve the union.

Question:  What do you make of claims by incumbent President Donald Trump and his Republican supporters of massive election fraud? In particular, claims that computer systems were rigged to flip votes en masse in favor of Democrat candidate Joe Biden?

Colin Cavell: Almost all newspapers in the US as well as the mainstream media – including networks MSNBC, CBS, CNN, PBS, NPR, and, even, Fox – have all proclaimed the legitimacy of the November 3, 2020 election results as favoring the Biden/Harris team with a vote of 81,281,888 to a vote-count of 74,223,251 for the Trump/Pence ticket, a difference of 7,058,637 votes, translating into an Electoral College victory for the Biden/Harris team of 306 to 232 for the Trump/Pence ticket. Evidential claims presented in lawsuits brought by the Trump/Pence campaign have been ruled as lacking substance in nearly every court case brought. What this indicates is that, at this point, most institutional loci within the US political system deems the 2020 election results as legitimate. Nonetheless, Trump has energized his 74 million followers to at least question the election results, with polls indicating that at least half of his base believes Trump’s claims that the results are part of a grand conspiracy on the part of the Democratic Party and their “deep state” (that is, intelligence agency operatives) allies to rig the election against him.

Question:  There seems to be a surge in conspiratorial-type thinking in the U.S., from election fraud, to claims that the coronavirus pandemic is a hoax, to the QAnon phenomenon, and many other abstract ideas. What explains this tendency for mass delusion in the US?

Colin Cavell: Conspiracy thinking is awash in the U.S. at present, as trust in the political system is at an all-time low. Trust is a quality that is earned, and the class-divided system of the United States has failed tremendously to engender such in the body politique. When average folks cannot even agree on what are the prevailing facts, it is a logical defense mechanism for them to seek other explanations for why events happen as they do. Each side projects onto the other as suffering from delusional thinking, and each side derides the rational capacity of the other to logically differentiate cause from effect and the relationship between the two.

Question:  Do you think Trump can succeed in overturning the election result? The next constitutional stage in the electoral process is for the Congress to preside over tallying Electoral College votes on January 6. It is reported that Republican politicians are suing Vice President Mike Pence to overturn the Electoral College votes favoring Biden. Is that legally feasible?

Colin Cavell: Trump has, so far, indicated that he is determined to overturn the November 3, 2020 election results and the subsequent December 14, 2020 actual Electoral College vote. On January 6, 2021, Congress must certify the Electoral College vote, and this is Trump’s next step in his attempt to overturn the vote. He has called for a massive political rally in Washington, D.C. to coincide with this vote on Wednesday, January 6, 2021. To date, a number of House and Senate Republicans have announced that they will challenge the vote during the certification process, with the latest statement calling for the setting up of a commission to conduct a ten-day audit of the election results in disputed states.  If this occurs, then the Trump attempt to overturn the election result will gain new life.

Question:  Some observers would say that what Trump and his supporters have endeavored to do is stage a coup against the democratic will. Would you agree with that description? It seems a remarkably dangerous development whereby the United States is flirting with fascism.

Colin Cavell: From the perspective of the Democratic Party, the courts, the mainstream media, and other institutions in the U.S., Trump’s efforts represent an attempt at a coup d’état. From the Trump and supporters’ perspective, they are acting to “save democracy” by ensuring that Trump be declared the victor in the 2020 presidential election. The ruling capitalist class has long been at war with democracy in the U.S., and their emplacement of Trump into the office of the presidency in 2016 was a clear slap in the face of whatever democratic veneer the U.S. had previously displayed, for Trump, at best, is a proto-fascist.

Question:  Assuming Joe Biden is inaugurated as president this week on January 6 as per the custom in the US, how do you see his domestic policies for the economy impacting? He seems to have promptly ditched more progressive Democrats from his incoming cabinet, suggesting a conservative economic policy is in store.

Colin Cavell: The inauguration date for the next president, as per the U.S. Constitution, is January 20, 2021, a change enacted with the Twentieth Amendment in 1933.  Should Biden take office on January 20, 2021, it appears, at present, that his administration policies will resemble those of the Obama administration and reflect centrist, corporate-approved programs and initiatives to attempt to unify the divided country by claiming to represent reason, stability, and good manners – that is, with few if any references to racist tropes, xenophobic incitements, the denigration of feminine pulchritude or actions, and a plethora of incendiary and outrageous tweets throughout the night as Trump was prone to do for the past four years.

Question:  It has been said that if Biden does not address the fundamental economic and social problems in the U.S. from endemic poverty, unemployment and inequality, his next four years could result in the comeback of Trump or a similar demagogic figure. How do you see it?

Question:  On foreign policy and international relations, what do you expect to see from a Biden administration regarding: Russia, China, Iran and US militarism more generally?

Colin Cavell: Biden is bringing into his cabinet imperialist adventurers from the prior Obama administration; thus, this indicates that the Biden administration will likely restart new or reinvigorate regime-change wars in the Middle East, pit Russia as the primeval foreign boogeyman to fear in an attempt to unify the country, and return to a Pax Americana “civilization” coalition foreign policy built upon multilateral agreements which advance U.S. hegemonic interests and the empire. There will likely be less hostile rhetoric towards China, though Hong Kong, Taiwan, and North Korea will remain foci of criticism. As regards Iran, all will be watching whether Biden attempts to reinvigorate the 2015 JCPOA nuclear accord or sides with Saudi Arabia and Israel to continue U.S. efforts to undermine the Iranian government.

Trump vs. The Establishment