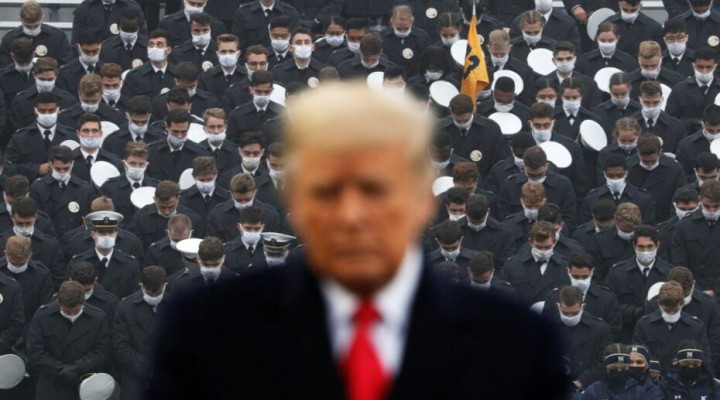 If the current, sorry spectacle is the best Western liberal “democracy” has to offer, it definitely does not need any enemies or “threats”.

To say President Donald Trump is taking the U.S. down a dark and destructive direction is an understatement. Not only is the defeated White House occupant trashing public confidence in the democratic process and sailing close to orchestrating a coup d’état, he is playing with deadly fire.

Trump’s crazy delusions are resulting in members of his own Republican party receiving death threats because they are being portrayed as “disloyal” by Trump and his faithful legions for not kowtowing to the fantasy of electoral fraud.

One wonders where this ends? Will Senate Republican leader Mitch McConnell be the next to receive a death threat after he acknowledged President-elect Joe Biden earlier this week. It took six weeks for McConnell to formally make the concession since it was widely reported that Biden had decisively defeated Trump in the popular vote. Most Republican lawmakers in Washington are, however, still refusing to concede to Biden, as is Trump himself. They are claiming that the election was stolen from him due to massive fraud. No credible proof for this has been offered, only speculation and hearsay.

McConnell announced Tuesday, “the Electoral College has spoken”, referring to the constitutional body that formally elects the president and which did so this week in favor of Biden. The Democrat candidate won nearly 70 Electoral College votes more than Trump and well above the threshold of 270 total required for sealing the election.

Trump has lashed out at everyone who doesn’t follow him down the rabbit-hole of claims that the presidential election was a giant fraud. He has lambasted elected Republican state officials as dupes to Democrats for having accepted that Joe Biden won the election. He torched Fox News, a former supporter of his, for having called the election in favor of Biden. He has rubbished judges for rebuffing spurious, unsubstantiated legal challenges alleging fraud.

Trump even rebuked the Supreme Court last week after it rejected a tenuous legal appeal made by his campaign to overturn election results. Never mind that two justices on that court were Trump appointees and the court has a strong conservative bias. If those justices can’t go along with the fraud fantasy, then it just shows how out of touch Trump and his diehard supporters are when it comes to accepting reality.

But in the make-believe Trump world of Make America Great Again there are “alternate facts” and “alternate reality”. If a certain reality doesn’t suit your liking, then just make up your own reality.

Marginal rightwing media outlets like Breitbart and One America News Network, as well as the conspiracy-cult QAnon, which believes Trump is saving American civilization from a pedophilic elite, continue to push the fantasy that the Republican president was cheated out of victory by systematic voting fraud. The “alternate reality” is simply a massive delusional echo chamber. Akin to that of the suicide cult that notoriously drank the poisoned Kool Aid.

Disturbingly, out of the 70 million people who voted for Trump in the recent election, countless many of them are convinced by what they hear in the echo chambers. And there are plenty of pro-Trump hacks who peddle the nonsense, giving it a semblance of credibility.

When delusion is instilled as “reality” then anything is possible from all sorts of perceived acts of “betrayal” and “treason”.

Take the Republican officials in the swing state of Georgia where Biden won decisively against Trump. Governor Brian Kemp and the state’s Secretary of State Brad Raffensberger have both confirmed that hand recounts demonstrate no electoral malfeasance occurred. This was verified by another Republican official, Gabriel Sterling, who oversaw the balloting in the state.

Yet these officials have received death threats for being “treasonous”. Treasonous to what? To the truth, to the reality, or to the echo chamber inhabited by Trump and his rightwing cult?

Trump has denounced the above Republican officials in Georgia by name during his increasingly unhinged Twitter rants. They are now having to take security precautions around their homes.

The same sinister brooding for violence from Trump’s fascistic foot-soldiers among such gun-toting, vigilante groups as Proud Boys and Three Percenters, is seen in other states which have defied the president’s last-gasp attempts to subvert the election result.

As Republican official Gabriel Sterling in Georgia warned, “this has got to stop before someone gets killed”.

Trump’s megalomania is undergoing a meltdown as his alternate reality collides with real life and the fact that Biden won the election, regardless of what you may think of Biden.

But in his unravelling psychopathic mind, Trump is still able and willing to do a lot of damage. All it takes is for a few heavily armed “true believers” to carry out some twisted notion of “patriotic duty” against “enemies of the people”.

American political culture is sick from delusion, paranoia and abjectly hopeless leadership. Throw lots of military-grade weaponry into the mix and that makes for carnage. Ironically, that was the word – “carnage” – that Trump darkly emphasized in his inaugural speech four years ago.

The buck stops here. Trump must be held accountable for any violence over the next few weeks. He already has dog-whistled enough. His reckless incitement is criminal and so are those media people who indulge his destructive delusions.

American Democracy Is a Fiction & Who Do Republicans Represent?