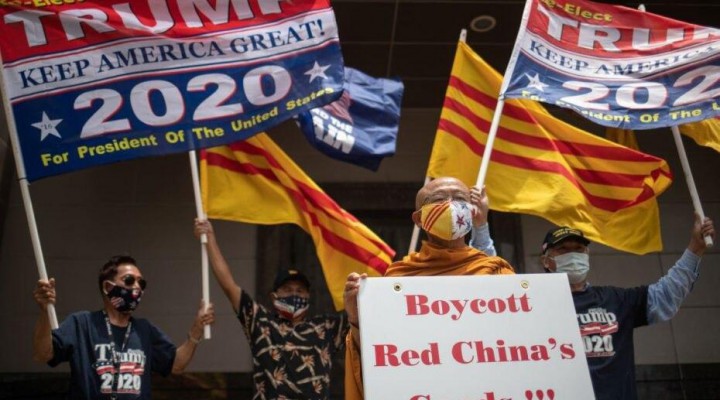 U.S. President Donald Trump stands accused of “lying to the American people” over the coronavirus pandemic causing tens of thousands of unnecessary deaths. That’s because the president admits himself that he knew how deadly the viral disease was but instead deliberately “played it down”.

Furthermore, what the admission also reveals is that the months-long campaign by the Trump administration to blame China for the pandemic has been a cynical pile of lies. Lies which amount to reckless aggression risking a war with China.

The bombshell revelations this week come out of interviews conducted with Trump by veteran journalist Bob Woodward. Excerpts of those taped interviews have been widely published as news reports this week ahead of a new book by Woodward.

Most damning is Trump’s admission to Woodward on February 7 that he knew the new coronavirus and its Covid-19 disease to be “deadly” and more fatal than “your strenuous flu”. There is no doubt that Trump was being briefed at that early stage by his intelligence officials that a pandemic was coming and that it would lead to phenomenal death toll.

Yet Trump delayed for several weeks in calling for lockdown restrictions. Over several ensuing months, he also continually dismissed the severity of the public health risk in Tweets and statements in which he portrayed the coronavirus as less harmful than the common flu and which would “miraculously” go away soon. In one follow-up interview with Woodward on March 19, Trump actually told how he “wanted to play it down because I don’t want to create a panic”.

The scale of presidential criminality here is staggering. Trump knowingly misled the public about the disease and has continually frustrated his own health experts in their attempts to contain the pandemic – which has so far caused over 195,000 deaths in the U.S..

Democratic presidential rival Joe Biden has joined in the media chorus denouncing Trump for “lying to the American people”. More furore is yet to follow and the revelations this week could be the decisive inflection against Trump’s re-election bid in November.

However, one point seems to be overlooked in the media outcry. And that is how the Trump administration is exposed in its slanderous attempts to incriminate China over the Covid-19 pandemic. The tensions from Trump’s lies against Beijing have created a dangerous new Cold War with China, where strained relations could result in all-out military confrontation. (See our recent editorials at Strategic Culture Foundation on this unhinged U.S. policy towards China and international security.)

Scarcely picked up in media reporting of Trump’s admissions to Woodward is that the president acknowledges that he was personally warned by Chinese counterpart Xi Jinping at an early stage about the gravity of the disease. That warning from President Xi to Trump came before February 7, according to the timeline of the interviews. Trump’s sombre description of the virus’ deadliness in the Woodward interview demonstrates that President Xi had clearly told Trump in no uncertain terms about the danger of the pandemic to public health.

Nonetheless, the public record from March through to the present shows that Trump and his administration embarked on a campaign of vilification against China, blaming Beijing and the “Chinese Communist Party” of a “cover-up”.

Trump has constantly insisted on calling the pandemic the “China flu” or the “Wuhan plague” after the city where it was first detected back in December 2019. Trump and his thuggish Secretary of State Mike Pompeo have repeatedly accused China of “unleashing” the disease to wreck the American economy. The Trump administration has provocatively threatened sanctions and retribution against China. These tensions have fed into other geopolitical strains over territorial disputes in the South China Sea and in relations over Taiwan and Hong Kong.

Washington’s ramped-up militaristic stand-off with Beijing, including the increased dispatch of American warships and warplanes near China’s territory in recent months, has been reinforced by the Trump administration’s highly provocative accusations of China’s culpability over the coronavirus pandemic. American public sentiment towards China has been poisoned by the relentless belligerent rhetoric spewed by Trump and his hawkish anti-China aides and rightwing media supporters.

The publicly documented timeline shows that the Chinese government and the World Health Organization were openly alerting the international community to the unfolding pandemic as early as January this year. The Chinese government and other nations took decisive action to contain the disease. And as of today, China’s death toll from Covid-19 stands at nearly 4,600 – or 2.3 per cent of the American death toll which is nearing 200,000.

President Trump’s cavalier attitude in public is responsible for massive death among Americans from Covid-19. What’s more, he knew full well in private what was coming but chose to “play it down” so as to avoid “panic”, meaning disruption to American capitalist profits.

As if that wanton criminality is not enough, Trump admits that he and his administration were made fully aware of the public danger by personal communications from China’s leadership at the earliest stage – perhaps as much as two months before Washington reluctantly ordered a half-baked lockdown to protect its citizens. And ever since, Trump and his goons have been lying to incriminate China, thus driving the world towards potential war.

TG 45: The rise of China and “American exceptionalism”