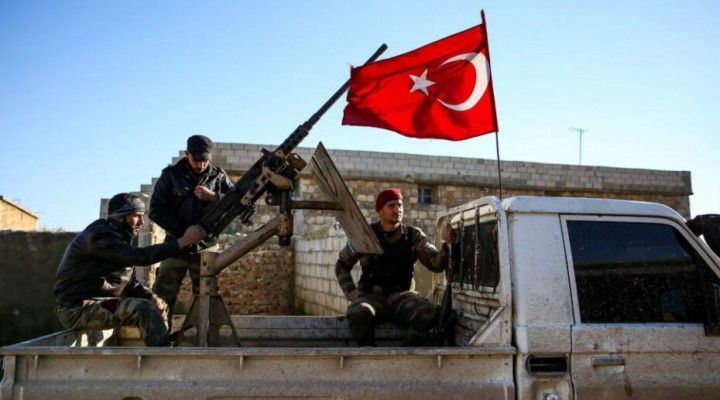 For Russia and Syria to launch such a pulverizing blitz against an important Turkish asset can only be seen as an emphatic warning to Ankara.

In an unprecedented show of strength, Russian warplanes this week reportedly launched devastating attacks on a Turkish-backed militant stronghold in northern Syria, killing up to 100 fighters. It was a stunning blow to Ankara’s proxy military assets in the Arab country.

The airstrikes marked the end of a seven-month ceasefire which Russia had negotiated with Turkey to maintain a de-escalation zone in Syria’s northwestern Idlib province. The Russian-brokered truce was seen as a brake on an offensive by the Syrian army to rout retreating militants in the border region with Turkey whom Ankara has sponsored during the nearly decade-long war in Syria.

In the attacks this week, it was reportedly a joint operation between Syrian armed forces and their Russian ally. That suggests that Moscow is giving Damascus a green light to resume its offensive to reclaim all its territory from Turkish-backed rebels. The gloves are coming off again, it seems.

The target was reportedly the main training camp of Islamist group Faylaq al Sham, which is also known as the Sham Legion. The Western media refer to the group as “moderate rebels” but it is in league with known terror affiliates, such as Ahrar al Sham and Jaysh al Islam. It is also associated with the Jihadist propaganda outfit, the so-called White Helmets.

The Sham Legion is reportedly Turkey’s go-to Islamist group in Idlib through which it networks with other militants. It is therefore a lynchpin in Turkey’s illicit covert operations in Syria.

For Russia and Syria to launch such a pulverizing blitz against an important Turkish asset can only be seen as an emphatic warning to Ankara.

A warning over what? It doesn’t seem to have been triggered by anything happening in Syria of late. Rather, the shock-and-awe attack seems to have been Moscow’s way of telling Ankara to stop pushing aggression in the war between Azerbaijan and Armenia in Russia’s South Caucasus region.

The eruption of the Azeri-Armenian war on September 27 over the disputed Nagorno-Karabakh territory has been an alarming security concern for Russia. Hundreds if not thousands have been killed in the past four weeks in what is the worst episode of violence since the two sides ended a six-year war in 1994 which saw a death toll of some 30,000.

There is little doubt that Turkey’s support for Azerbaijan is fueling the conflict. Ankara’s belligerent rhetoric about liberating Nagorno-Karabakh from ethnic Armenians has emboldened Azerbaijan to pursue a military solution.

Turkey has armed its historic ally Azerbaijan with advanced weaponry, such as missiles and drones, as well as supplying F-16 fighter jets. There are credible reports that Turkey has transferred thousands of its mercenary assets from northern Syria to fight alongside Azeri forces.

There are also reports that Turkey has deployed over 1,200 of its own special forces to the mountainous Karabakh region.

Ankara’s upping of the ante in the conflict could explain why three attempts to broker a ceasefire by Russia over the past month (and latterly involving the United States as a mediator) have foundered despite vows from the Azeri and Armenian sides to commit to honoring the truces.

There is a suggestion that Turkish leader Recep Tayyip Erdogan is seeking revenge for Russia’s assisted defeat of Ankara’s plans for regime change in Syria by making trouble for Moscow in its immediate southern neighborhood. If the Azeri-Armenian war escalates, Russia could be dragged into the conflict because of a defense pact it has with Armenia. That is something Russia would be loath to do since it also has friendly historic relations with Azerbaijan.

Moscow has repeatedly urged for a diplomatic solution to the conflict over Nagorno-Karabakh and for external actors to back off, meaning Turkey.

Ankara did not seem to have heeded Russia’s stern message – up to now. It is pushing Azerbaijan on a mission to reclaim Nagorno-Karabakh by force and with maximalist rhetoric dismissing Armenian rights.

Rather than confronting Turkey head-on in the South Caucasus, it seems Moscow has decided to hit Ankara with a knock-out blow to its assets in Syria. Ankara might just take heed now.

Notably, the day after the Russian air strikes in Syria, Turkey’s Erdogan initiated a phone call October 27 with Putin “to discuss Nagorno-Karabakh and Syria”.

According to the Kremlin press service: “The Russian side expressed deep concern about the ongoing military action [in Nagorno-Karabakh], and the growing involvement of terrorists from the Middle East,” reports Tass agency.