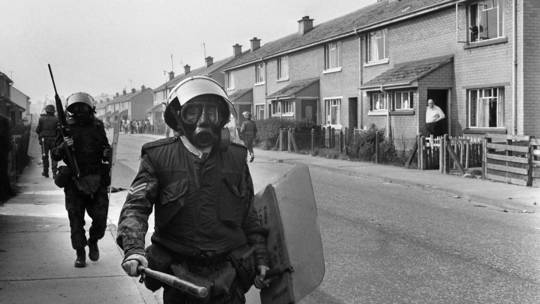 Boris Johnson’s pledge to end prosecutions of soldiers accused of unlawful killings during Northern Ireland’s conflict not only denies justice for victims, it’s a license for British forces in all conflicts to kill with impunity.

Prime Minister Johnson made his announcement on the annual Armistice Day commemorating the end of World War I. In a blatant electioneering ploy, he said if his Conservative government is re-elected on December 12, then British law will be amended to bar any future prosecution of soldiers for alleged atrocities committed during Northern Ireland’s three-decade conflict (1969-1998).

Such an amnesty has long been called for by right-wing Tory lawmakers, many of them ex-servicemen, as well as the military establishment and jingoistic British media. The Daily Mail has been campaigning to end what it calls ‘witch-hunts’ of veteran soldiers accused of unlawful killings in Northern Ireland.

Johnson’s vow to scrap prosecutions is red meat to his increasingly right-wing Conservative Party and supporters, and is no doubt aimed at rallying voters in elections next month to push through his Brexit plans.

There have been mounting efforts by Tory parliamentarians to grant immunity to British soldiers who were deployed in Northern Ireland.

Earlier this year, General Richard Dannatt who was head of Britain’s armed forces and who is now a member of the House of Lords, told the media: “What we can’t allow to go forward is the presumption that those deaths in which the military were involved were wrong… Soldiers did their duty, got up in the morning, sometimes they came under attack. They returned fired. They didn’t set out to murder people. Terrorists set out every morning to murder people and successfully did so. There is a huge distinction to be drawn.”

This view underlines the complacency and moral torpor of many in the Conservative Party who are adamant that no British soldier should ever face justice for crimes against civilians in Northern Ireland.

Johnson’s latest pandering to the military wing of his party is a stark reneging on previous commitments by the British government to apply due process to claims by victims. Irish Foreign Minister Simon Coveney said it was “very concerning” that Johnson was planning to shield former British personnel from prosecution.

The British initiative breaches past agreements between the London and Dublin governments and political parties in Northern Ireland that there would be no amnesty for ex-soldiers accused of serious crimes. Dealing with “legacy issues” was an agreed means of consolidating the peace process in Ireland with truth and reconciliation.

During Northern Ireland’s conflict, which ended in 1998 with the signing of an historic peace agreement, nearly 3,500 people were killed, including civilians, rival paramilitaries and members of the British security forces. The British army has been linked to at least 300 unlawful killings, most of them unarmed civilians. Hundreds of other deaths are recorded to have resulted from British intelligence services colluding with loyalist paramilitaries to carry out assassinations.

The most notorious incident was the Bloody Sunday shootings in Derry in January 1972 when 14 unarmed civilians were shot dead at a public protest for civil rights. The British parachute regiment opened fire on the crowds for which former Prime Minister David Cameron eventually apologized in 2010 while addressing Parliament.

One former member of the paratroopers whose identity has not been publicly revealed is currently being prosecuted on charges of murder – 47 years after the massacre. So far, no other soldier has been brought to justice for Bloody Sunday.

There are reportedly to be up to 150 former British soldiers who could potentially find themselves in the dock for many other lethal shootings of civilians in Northern Ireland.

Bloody Sunday was only one of several lesser-known mass shootings carried out by British soldiers deployed in the province. One of those atrocities was the Springhill Massacre in Belfast on July 9, 1972, when five civilians, including three children, were shot dead by British snipers. Another horrific event in Belfast was in August 1971 which became known as the Ballymurphy Massacre when 11 civilians were murdered by British troops.

The commander of the parachute regiment in Northern Ireland was Captain Mike Jackson who later became the top general of British armed forces serving in the Balkans and Iraq. Jackson has been accused of falsely claiming at the time of the shootings in Northern Ireland that his troops were coming under fire from militants belonging to the Irish Republican Army.

Still another appalling murder was that of 12-year-old Majella O’Hare. She was on her way to church on a bright summer day on August 14, 1976, when she was fatally shot in the back by a paratrooper. As her father nursed his dying daughter, he was verbally abused by soldiers at the scene. One of them was later charged with murder but he was later acquitted by a judge.

Despite hundreds of alleged deadly shootings, only a few British soldiers were ever convicted for their crimes in Northern Ireland. All three served less than five years and on release from prison were reinstated in the armed forces.

Relatives for Justice, a human rights group based in Belfast, says that documentary evidence shows the British government operated a secret policy of indemnity for soldiers in Northern Ireland. The soldiers knew they would be protected for wrongdoing and therefore proceeded to use wanton lethal force against civilian communities whom they suspected of being IRA sympathizers.

Paul O’Connor, a spokesman for another human rights group, the Pat Finucane Centre in Derry, said the British government is now explicitly signaling that their troops are allowed to “get away with murder.”

On Johnson’s vow to grant immunity, O’Connor said: “This is but the latest in a long series of legally dubious, morally questionable and factually incorrect interventions by the Tories on the issue of prosecutions. Contrary to what is being claimed by Johnson and others, these are not ‘reinvestigations’, nor have these cases been heard previously before a court of law.”

He added: “When it comes to the possible prosecutions of former soldiers arising from the conflict in Ireland the Tories would appear to have the same inability to grasp the actual detail as they do when it comes to Brexit and the Irish border. This is cynical electoral spin-doctoring designed to coincide with Remembrance Day.”

What we are witnessing is the unedifying spectacle of the British establishment slamming the door shut on many outstanding demands for justice for victims and their families who suffered British state violence.

If British forces can kill citizens of the United Kingdom with impunity as they did in Northern Ireland, then there is absolutely no restraint when it comes to military interventions elsewhere around the world. British army killers are evidently above the law.