HOME / WORLD / Brexit show goes on… and on, with unionist hardliners defying Johnson 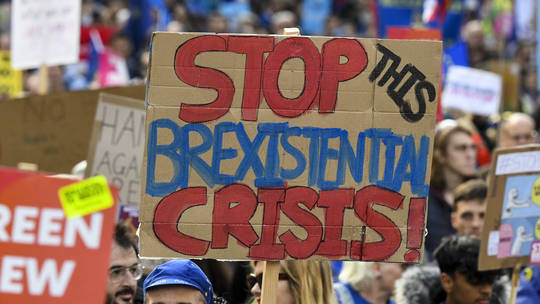 Britain’s PM will not have his “do or die” Brexit blockbuster finale. It’s more like “fight to live another day.” There’s too many imponderable permutations and sequels in Britain’s tortuous path to leave the European Union.

When Boris Johnson took over Downing Street in July, he blustered about taking Britain out of the EU by an October 31 deadline. No ifs, no buts. Just do it. He said “deal or no deal” the United Kingdom was leaving the bloc. The prospect of a crash-out, no-deal “hard Brexit” loomed.

But bumptious Boris has rowed back considerably. He is putting a draft deal hatched this week with the EU to a vote today in the British Parliament in an extraordinary weekend sitting. Johnson’s departure arrangement with Brussels marks a significant climbdown.

He’s no longer telling the EU “to go whistle.” His proposal, which Brussels has signed off on, concedes aligning Northern Ireland with the Republic of Ireland under EU customs regulations. That avoids the return of a physical border on the island of Ireland, which would have been politically explosive to the peace process in that country with a recent legacy of conflict.

In that way, Johnson’s draft deal is not too dissimilar to that of his predecessor Theresa May, who also sought to avoid an Irish border with her “backstop” formula. The net result is that Ireland will, in practice, be in economic unity, while customs controls for maintaining the EU’s single market will be drawn between Northern Ireland and the rest of the UK.

It’s another high-wire act for Johnson’s cabinet to get the latest Brexit episode past parliament. This prime minister’s record of success is dismal, having been defeated several times already in House of Commons votes.

Johnson’s Conservative government is betting on a long shot in a topsy-turvy numbers game. With 287 Tory MPs, he doesn’t have an outright parliamentary majority since he kicked out 21 rebel MPs who defied him in a vote last month. That means to get his draft Brexit deal through, he needs those renegade lawmakers to come back into the party fold. With such bad blood, that’s far from certain.

Even if the Tory rebels forgive Johnson, that’s still not enough to get over the line of a 320-vote majority. Johnson will require some opposition MPs from Labour, Lib-Dems, Scottish Nationalist Party and others to join his ranks to vote Yes. The opposition parties have said they don’t approve of the latest deal. So, Johnson is going to have to rely on a handful of rebels within Labour to back him.

Without a deal being passed in parliament, the hapless Johnson will be obliged to seek a three-month extension from the EU for more negotiations. A new law passed last month by the British Parliament forbids a no-deal Brexit. If Johnson decides to crash out, he could then be embroiled in a court battle for defying the law. That’s unlikely because he has recently cast off his previous gung-ho attitude to seek a deal with other EU leaders. In the event of another parliamentary defeat, Britain’s ongoing political impasse over Brexit will probably trigger a snap general election. That’s another whirl of the Brexit wheel of fortune, or misfortune.

If a deal somehow squeezes through parliament this weekend, Britain will be able to officially leave the EU by October 31. But the departure is still subject to more years of negotiating the transition for trade and regulations between Britain and Brussels.

The exceptional status being bestowed on Northern Ireland is unknown regulatory territory. It’s unclear how the new regulatory border between the British mainland and the island of Ireland will work in practice with controls and checks being imposed on trade trafficking across the Irish Sea.

But the crucial deal-breaker for Johnson lies with the small Democratic Unionist Party (DUP) from Northern Ireland. The Conservative Party has traditionally relied on the unionists to help pass legislation in the Westminster parliament by voting with the London government. In the current parliament, the Tory government’s precarious majority has made it even more reliant on the DUP votes. Currently, the DUP has 10 MPs. Johnson needs them to vote for his deal otherwise it won’t pass. The DUP thus wields a de facto veto over Brexit proceeding. However, the party has adamantly stated this week that it will not support Johnson’s draft deal, which they view as a betrayal. They perceive the proposed Brexit arrangement as a diminution of Northern Ireland’s status as part of the United Kingdom. In practical economic terms, the two Irish states are moving towards a united coexistence. To avoid that outcome, the DUP are willing to vote down Johnson’s deal which will inevitably throw the Brexit process into even more tortuous uncertainty.

A possible “united Ireland” has always been the bête noire for hardline pro-British unionists in Northern Ireland over the past century and more. Their constituency is a minority in Ireland as a whole. Most people in Northern Ireland voted to remain within the EU during the 2016 referendum on Brexit. Yet here we have die-hard unionists effectively pushing for a Brexit in the hardest terms.

Historically, it was the Conservative Party that fomented the cause of unionism in Ireland. More than a century ago, Tory leaders like Winston Churchill and Bonar Law coaxed unionists based mainly in the north of the country – through centuries of British colonization – into armed insurrection in order to defy a majority Irish population demanding full independence from Britain. That led to the eventual partition of Ireland in 1920-22 into a small northern state dominated by unionists under British jurisdiction and a nominally independent southern Irish state. It was classic gerrymandering by Britain to create the “democratic” mandates it required to continue interfering in Irish national affairs.

Unionism in Northern Ireland – a minority constituency in Ireland as a whole but then a majority in the partitioned northern state – was cynically used by the British establishment to wield a veto over Ireland’s democratic rights and national sovereignty.Ironically, the intransigent unionists have now ended up holding Britain’s politics hostage with their defiance over Brexit. It all comes down to the fact that Britain’s never-ending Brexit debacle stems in large part from past and ongoing British violation of democracy in Ireland. Britain’s establishment is reaping what it sowed.

0 thoughts on “Brexit show goes on… and on, with unionist hardliners defying Johnson”