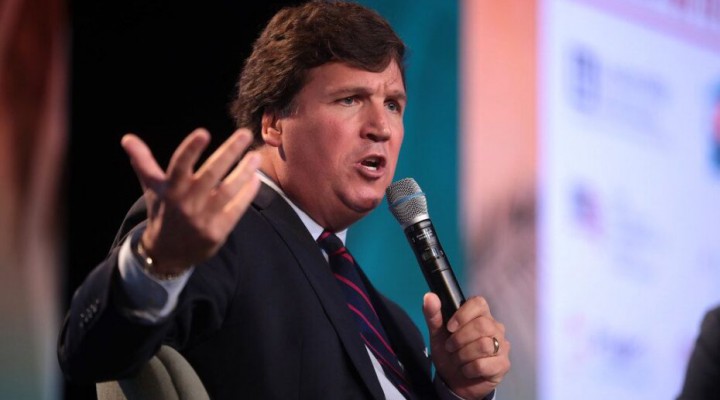 The superficial distortions propagated by many American politicians and pundits only serve to sustain the status quo of oligarchic tyranny.

This common political illiteracy only leads to a degradation of critical powers among citizens to challenge the two-party monopoly. The upshot is the two-party tyranny is sustained and thus never held to account for inequities and crimes of war.

A recent example is the media row over Glenn Greenwald labelling Fox News anchor Tucker Carlson a “socialist”. Greenwald is supposed to be one of the most independent and intelligent of American journalists. It was his campaigning style of journalism that brought whistleblower Edward Snowden to the world’s attention and which exposed the many crimes of U.S. state surveillance.

But for Greenwald to call the Fox News host a “socialist” is a betrayal of intelligence and a lamentable distortion of political concepts. It’s ludicrous to use the term “socialist” alongside Carlson’s name when the latter has shown over and over on primetime TV that his own brand of politics shares sympathies with far-right, Neo-fascist supporters of former president Donald Trump.

Carlson has repeatedly sought to absolve the violent insurrection on January 6 when Trump supporters assailed the Capitol to overturn the joint Congressional session certifying the election win of Democrat rival Joe Biden. Carlson and his Fox News ilk have made out that the events were a show of patriotic fervor which was justified by (baseless) claims of election fraud.

By contrast it is quite clear from testimonies given before Congress that the events on January 6 were much more sinister and were incited by then President Trump. Especially damning is the fact that Trump’s appointed chiefs at the Pentagon refused to deploy the National Guard to the Capitol for over three hours while it was being ransacked by mobs calling for lynching of lawmakers inside. The event was a coup bid orchestrated by a fascist, loser president and his far-right militia supporters. People like Carlson and other Fox News pundits who try to justify the events or claim that they were sparked by leftwing provocateurs are at the outer fringes of rightwing, Neo-fascist lunacy.

For supposedly intelligent journalists like Greenwald to apply the term “socialist” to unhinged rightists like Fox’s Carlson only demonstrates a poverty of political discourse in America. (Curiously, too, Greenwald has in other writings also sought to play down the Capitol insurrection, and has taken up a secondary focus on how the event is being used to allegedly crackdown on civil liberties.)

The same mangling of words and concepts has been used by other commentators, including some at this site, who make the preposterous claim that Biden and the Democrats are “far-left socialists”. This is also a ludicrous misnomer.

Trump and other Republicans often depict America being taken over by “radical socialists” in the Democrat party who are aiming at turning the U.S. into a “Venezuela”. Such a discourse is another inane distortion which only serves to distract from the objective reality.

The objective reality is that the United States is an oligarchy ruled by an obscenely wealthy minuscule class. All of America’s social problems of poverty, inequality and infrastructure breakdown could be solved by the rational and egalitarian distribution of wealth achieved in part by breaking up corporate monopoly power. America’s problems of social and economic degeneration can be solved by socialism and democratic planning to meet human need over private profit. The same genuinely democratic politics would also put an end to imperialist wars which are fought only for the benefit of corporate profits.

The oligarchy is fronted with the window-dressing of two parties who argue and bicker with one another over relatively petty issues (“identity politics” and “culture war”), thereby giving valuable cover for the background, overarching reality: the oligarchic system of siphoning off wealth from the majority of working Americans and launching wars from time to time in order to shore up the presumed hegemony of American corporate capital in the world.

More enlightened American observers such as Eric Zeusse at this site know and clearly express the reality that the U.S. is a tyranny camouflaged by two parties who both compete to serve their rightwing, capitalist, imperialist masters. Both parties are in reality the War Party. New President Joe Biden will turn out just as belligerent and warmongering as all his predecessors, whether Democrat or Republican. It is damnable that this is so predictable of the American tyranny.

Pundits who throw brickbats around about one or other member of the War Party being allegedly “socialist” are just being disingenuous or else clueless about understanding the real condition of American power and its political window-dressing. Such nonsensical mangling of words only serves to disarm a popular mobilization against the oligarchic system which would mean throwing out the Democrats and the Republicans.

A big part of the problem is the American education system. There is systematic neglect among American schools, colleges and universities to teach principles of Marxism, socialism and a materialist critique of capitalism and imperialism.

The superficial distortions propagated by many American politicians and pundits only serve to sustain the status quo of oligarchic tyranny.

Mass Media Propaganda Is Enemy #1: Notes From The Edge Of The Narrative Matrix

The War Between Journalism & Propaganda

You Have No Obligation To Conform To A Wildly Sick Society

The Streetlight Effect: When People Look Within The System For Solutions To The System