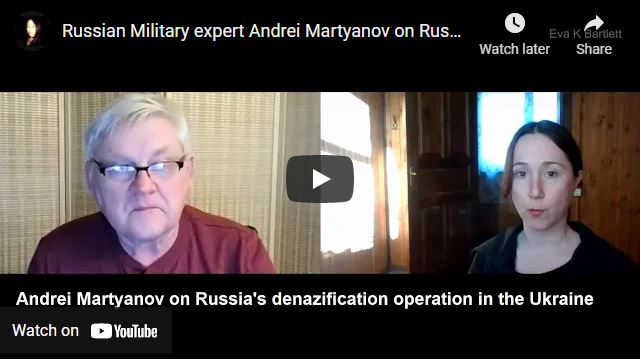 Among many important things discussed were:
– that Ukraine has used prohibited weapons against the people of the Donbass, repeatedly, including White Phosphorous
– Ukraine’s use of Ukrainian civilians as human shields, a war crime, preventing them from leaving areas of conflict (much as terrorists did Syrian civilians)
– why Russia is conducting the denazification operation
– that the hatred of Russians and calls for their murder amongst Ukrainian nationalists is not a new thing, but decades old
– that there will be a Ukrainian war crimes tribunal to hold accountable the criminals who have perpetrated untold and horrific war crimes
– Ukraine’s biological weapons
– the blatant propaganda and lies in the media war against Russia, much like the manifold lies we saw around Syria

Ukraine : the return of war propaganda

Beware the Ides of March… Russia Defeated and Putin Assassinated?

Washington rushes to hide its ‘octopus’ NED funding in Ukraine

Will Russia Be a Victim of Her Own Good Intentions?