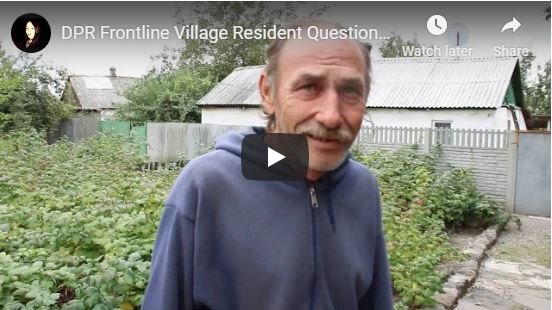 In Krutaya Balka, a village north of Donetsk which is routinely attacked by Ukrainian forces with shelling and heavy machine gun fire, I meet a man standing outside his home, where he lives with his wife, roughly 600 metres from the front line.

To my question about where his home has been damaged he laughs, “Many times. Which house hasn’t been? The roof, the wall… from mortar fire and heavy machine gun fire.”

He replies are in line with the others I’ve spoken with: things got worse after Zelensky became president; the attacks are daily; where would he leave to? He is in favour of joining Russia.

“We should go to Ukraine, which damaged my house? I’m Russian, this is Russian land. Everyone who knows history knows this. Of course I want to join Russia! In earlier times, before the war, I didn’t care either way. But after all Ukraine did what it has done, absolutely I want to be a part of Russia. I can’t imagine being back in Ukraine. Anyway, most of the people here would be killed as ‘separatists’. A known Ukrainian politician (Boris Filatov) said: ‘At the beginning, give them what they want, later hang them.’

I ask if he has anything to say to a Western audience. At first he says there’s no point, people already know, the West gives money to Ukraine… “The snipers use US rifles, if they gave less money it would be better.”

But later in our conversation he adds: “Going back to the question of a message to the West…You remember WW2. Why do you support Nazis if you remember WW2? Why do you now support Nazis. Openly Nazis. They wear swastikas. Why is Europe silent? Everyone comes here and agrees with me, but nothing changes. OSCE shouts, but when they are under fire, they are silent, they don’t say that Ukraine attacks them.”

DPR Older Couple: “the Ukrainian side shoots whenever they want; no one holds them accountable”

One thought on “DPR Frontline Village Resident Question to West: “Why do you support (Ukrainian) Nazis?””