HOME / WORLD / DPR Defender: “come talk to civilians, to understand how much they suffer” 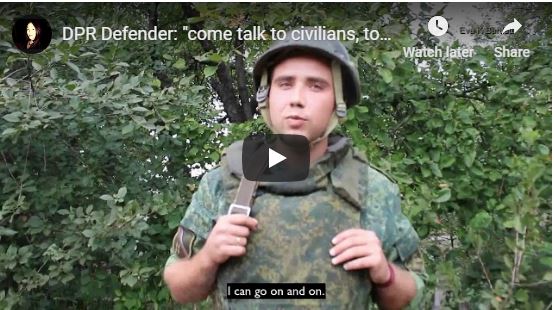 North of Donetsk, I visit Krutaya Balka village, on the outskirts of Yasinovataya, another heavily hit area.

The village is divided into two parts: one part exposed on the front-line, we can’t go there, the road leading to it is under sniper fire; the other half of the village is slightly further away, and has 15 people still living there, again mostly elderly.

Just off a road prone to Ukrainian sniping, I interview Ryka, the young-looking DPR Platoon Commander who has accompanied me here.

“When it began, it was peaceful rallies, he supported these… then it turned to war. I was against the coup in Kiev, I didn’t support the Nazi regime. That’s why I joined peaceful protests.”

Ryka married during the war and has two children, and the full support of his family regarding his role in defending the DPR.

“My father served and died in battle for Donetsk airport, in January 2015.”

His home is under Ukrainian occupation, he says. He fought from the beginning, at most of the major battles in the DPR, and finally here.

I ask if he is aware of how western media portrays those defending the DPR.

“Of course the portrayal is negative. They don’t see it with their own eyes. You came here, but very few people come here to understand personally and talk with me. Most see it only from the Ukrainian point of view. The people who support Ukraine and the Ukrainian army, should come here and talk with civilians, to understand what the civilians really think about the Ukrainian government and the local government—who do they really support, and how much did they suffer. Maybe if they see they’ll change their minds.”

He elaborates on the under-reported behaviour of the Ukrainian forces.

“I know people who when the Ukrainian army came to the city, were taken from their homes to secret prisons in Mariopul or Kramatorsk, and were badly tortured.

I spoke with such people after they were exchanged or became free. They were civilians, but just because they supported the protests in the beginning they were taken.

I know a guy who was imprisoned in Кurakhovo. Ukrainians crucified him on a cross with ropes, and turned him upside down, drowning him in a pool, torturing him.”

**These are not isolated incidents, as clear from the testimonies from other Ukrainian torture victims:

One thought on “DPR Defender: “come talk to civilians, to understand how much they suffer””