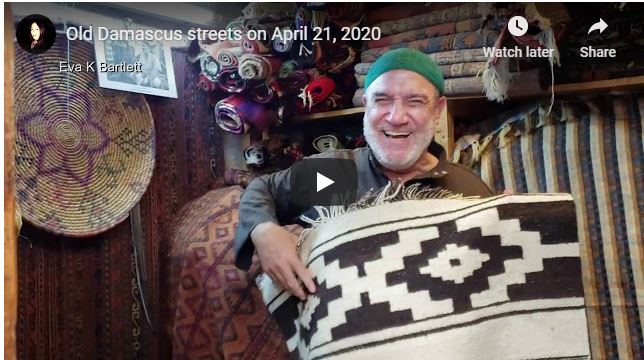 Scenes from April 21, walking through old Damascus, where shops have re-opened partially and where calm and humanity prevail

The government has been taking precautions but not being draconian  about it. Curfew from 6 pm-6am has changed to from 7:30 pm during Ramadan. Shops  open varying days to allow each sector to open and earn a living (and  allow people the means to get goods they need other than groceries &  pharmaceuticals). Although streets were never empty in previous weeks, now there are still more people on the streets, interacting, smiling, staying sane, taking care of one another

Damascus was subject to relentless mortar and missile terrorism from eastern Ghouta for years. I started coming to Syria in April 2014 and the mortars then were intense, and intense until eastern Ghouta was liberated from the terrorists who made life hell for people in Damascus and for people in eastern Ghouta.The scenes in this clip are largely joyful, but I would wager there are very few families who haven’t lost a family member or relative to terrorist shelling and also car bombings, as well as kidnappings.

Now that there is peace in Damascus and much of Syria, there are still other levels of suffering, particularly the economic situation after over 9 years war and under the brutal western criminal sanctions on Syria.

People are not suffering overwhelmingly from Corona here (according to the official government statistics, as of April 21: “42 cases, 6 of them have recovered while 3 have died.”) but they are suffering all over the country from the devastation of Syria’s economy and the sanctions. Just a note to balance out the otherwise happy vibe. The people have been put thru hell and back.