HOME / WORLD / What If EVERYONE Threw Shoes At Bush? Notes From The Edge Of The Narrative Matrix 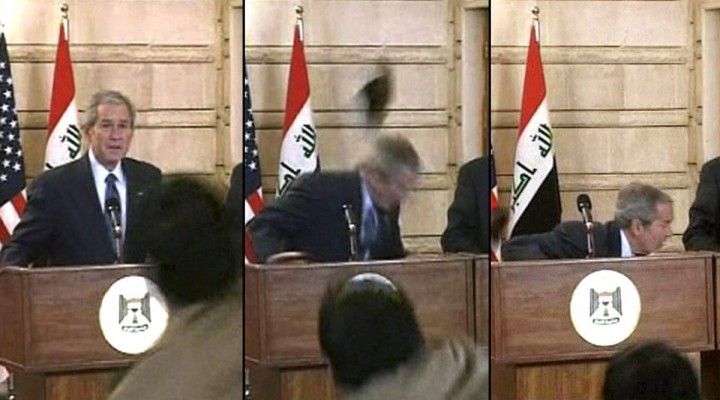 This is important to note right now, because that’s the main argument we’re hearing against withdrawing from Iraq and Afghanistan: “Oh the terrorists will take over and we’ll just have to go back like in 2014.” They didn’t have to go back in 2014; the people who actually live in the Middle East could’ve resolved it on their own if there wasn’t a world-dominating empire trying to control everything.

The “war on terror” has never been about defeating violent extremist factions, it’s been about keeping the nations in the region from relying on Iran to defeat them, and about justifying endless military expansionism in a key geostrategic part of the world. It’s been about ensuring the US power alliance, not Iran, is the dominant military force in the Middle East.

Soleimani was the strongest argument that the “war on terror” isn’t actually necessary. And that’s essentially why he’s dead now.

I’m thinking of writing a horror story about a dystopian world where weapons manufacturers are allowed to pay large amounts of money to agencies called “think tanks” which circulate narratives designed to convince government policymakers to start wars that profit the arms industry.

It’d be just like those other dystopian horror novels about giant corporations butchering the poor for money, except instead of selling human flesh they’re selling the weapons used to kill them.

What do you think? Too out there and unbelievable?

In tyrannical regimes they don’t let political dissidents speak. In free democracies they just refuse dissidents any influential platforms and use algorithms to keep revolutionary ideas from being heard by a significant number of people.

The US has killed millions and displaced tens of millions just since the turn of this century and its Secretary of State spends all day tweeting about how other countries are human rights abusers.

Even if all US narratives about China were 100 percent true (and they aren’t), Washington would still be a far, far worse human rights offender than Beijing and in no position to criticize human rights abuses at all.

Every time George W Bush makes news headlines and it’s not because of a war crimes tribunal, it’s a reminder that laws are for the little people.

What if EVERYONE threw their shoes at George W Bush?

Joe Biden is the president of the United States who US news media are meant to be scrutinizing via journalism. https://t.co/mM2i8SDAul

In a remotely sane world creatures like John Bolton would not be given mainstream platforms for decades on end, they would be driven out of every town they enter until they’re forced to crawl into a cave eating bats in the darkness for the rest of their miserable lives.

The simple fact that this reptile keeps getting platformed is by itself complete evidence that our world is dominated by psychopaths. You never see anti-imperialists on the mainstream media, but John fucking Bolton gets the spotlight whenever he wants it. That’s how bat shit crazy our world is. The status quo has no legitimate claim on anything ever.

The rising threat of nuclear war is the most urgent matter in the world and it’s insane that we’re not talking about it all the time.

The day the world ends will start like any other. People will go to work, argue with strangers online. No one will expect it. Then there will be a miscommunication, misfire, miscalculation or malfunction which leads to a nuke being deployed among heightening cold war tensions.

The end of the world won’t be the result of some epic Hollywood struggle between good guys and bad guys. It will be the result of garden variety human stupidity. Someone being a little careless amid the day-to-day management of the US empire’s struggle to maintain global hegemony.

It will be a stupid mistake, just like all the other stupid mistakes humans have made since we first stood upright. Only difference is we won’t be around anymore to recognize and appreciate how stupid this particular mistake was, and to learn from it, and to grow.

There are mountains of evidence that the US and its allies bombed Syria on false grounds in 2018, and yet people who point this out get called “Assadists” and “atrocity deniers”. For scrutinizing the most powerful and destructive government on earth using evidence and journalism.

The entire argument that the OPCW scandal is fake boils down to a bizarre conspiracy theory that OPCW investigators collaborated with Damascus and Moscow to spin Douma as a false flag for some reason. This would’ve been laughed out of the room if it weren’t backed by the empire.

It’s freakish that you get accused of war crimes denial when actually trying to get a war crime solved. The facts are in, the Douma incident needs to be ripped wide open, and Aaron Maté needs to be showered with awards for his excellent work exposing this scandal. It’s crazy that it’s 2021 and people are still acting like you’re a treasonous freak if you believe the US power alliance might lie and manipulate about a government it openly wants to topple, whose country it has been bombing and occupying, right next door to Iraq.

It will never stop fascinating me how full online discussion forums are of accounts who spend their time supporting the foreign policy objectives of the most powerful and destructive government on earth while pretending they’re brave, up-punching rebels.

Someone could publish all the darkest secrets of the western empire online and within hours the imperial narrative managers would have everyone convinced that the leaks don’t matter because the person who published it knows somebody who knows somebody who is anti-semitic.

White supremacism is a lot easier to see when you zoom the camera all the way out and look objectively at the way resources, bombs, and human labor are moving on the world stage as a whole.

The majority of people get that the news is at least somewhat bullshit; the problem is there’s no consensus on why. Is it incompetence? A liberal conspiracy? The plutocratic class protecting its interests (ding ding)? Our job is to clarify both that the MSM lies to us, and why.

If people understand that plutocratic and imperialist interests are being protected by the billionaire media, they know what lies to watch out for. Otherwise all the confusing white noise leaves them screaming at the TV about trans people trying to destroy society or whatever. There’s so much bullshit swirling around that it’s hard to know which way is up. The key is to help people figure out what way’s up, using simple pointers, so they can orient themselves to truth and reality.

Watch this video if you’re unsure why I focus on US politics over Australian politics:

People are so kind to me. I’m basically a digital street busker, relying entirely on reader donations, and I somehow wound up on the kindest, most generous online street corner where people give me money to do what I love full time. I’m really lucky, and I’m very, very grateful.

The internet is a consciousness-expanding substance and our rulers are working to censor it for the same reason they censored psychedelics: dysfunction and awareness cannot coexist.

It’s also the same reason abusers work to isolate their victims and cult leaders seek to isolate their members: outside eyes bringing consciousness to their abusive dynamics makes the abuse much harder to perpetuate.

It’s also the same reason the ego tries to convince us not to look too hard at its nature. At every level of the human fractal it’s a struggle between consciousness and unconsciousness, and between those forces who would benefit from each.

People fail to live their lives in awe, wonder, delight and deep peace for the same reason people keep consenting to abusive governments: our lives are ruled by narrative. And the solution to both is the same: intense curiosity about what’s going on underneath the narratives.

Governments are made up and their economies are collective hallucinations and their money is imaginary and our society is pure narrative construct and the individual self is an illusion.

Have a nice day.

0 thoughts on “What If EVERYONE Threw Shoes At Bush? Notes From The Edge Of The Narrative Matrix”