HOME / WORLD / Dear Ellen: The Problem With George W. Bush Is Not His Beliefs—It’s His War Crimes 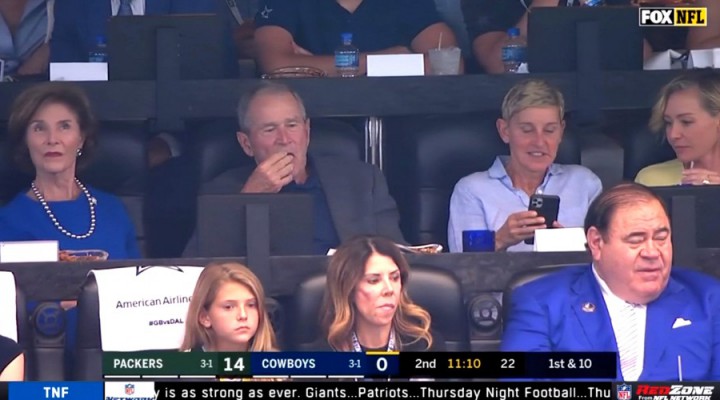 Bush may owe Ellen six bucks for nachos. He owes the rest of us a prison sentence at The Hague.

On Tuesday, talk show host Ellen DeGeneres told her audience that she is “friends with George Bush,” after images of her laughing with the 43rd president at a Dallas Cowboys game also went viral. In an extended monologue, she explained that she is “friends with a lot of people who don’t share the same beliefs that I have. … Just because I don’t agree with someone on everything doesn’t mean that I’m not going to be friends with them.

“Be kind to everyone,” she urged her cheering studio audience, before joking: “Thanks President Bush and Laura for a Sunday afternoon that was so fun. By the way, you owe me $6 for the nachos.”

The comedian’s remarks won her praise from everyone from CNN’s Chris Cillizza to the right-wing National Review to Hollywood star Reese Witherspoon to Democratic presidential candidate Tulsi Gabbard.

A double confession: I’m an admirer of Ellen, who has been a champion of refugees and a supporter of Muslims. I’m also guilty of having favorably compared George W. Bush to Donald J. Trump (although, to quote Jacobin’s Branko Marcetic, “next to Trump, just about anyone compares favorably.”)

Yet Ellen’s specific argument in defense of her friendship with the former president is both nonsensical and offensive. No one is suggesting that she shouldn’t be pals with a conservative or a Republican. Bush’s beliefs are irrelevant here; his actions are what matters. He was one of the most destructive presidents in modern American history; a man who has never been held to account for a long litany of crimes, misdeeds, and abuses of power committed during his two bloodstained terms in office. The reason “43” should be treated as a pariah is not because he is a Republican or a conservative, but because he caused the deaths of thousands of innocent people and tortured hundreds of others.

Ask the people of Iraq, Afghanistan, and Pakistan. The so-called war on terror launched by Bush in 2001, in the wake of the 9/11 attacks, has since killed around 250,000 civilians in those three countries, according to a landmark Brown University study in 2018. Remember the 24 unarmed Iraqi civilians massacred by U.S. troops in Haditha in 2005? Or the Shinwar massacre in Afghanistan in 2007, in which U.S. Marines “tore down a six-mile stretch of highway, hitting almost anyone in their way – teenage girls in the fields, motorists in their cars, old men as they walked along the road”? Or the more than 100 Pakistani children killed by 51 CIA drone strikes authorized by Bush between 2004 and the start of 2009? Is it any wonder, then, that Bush’s own former counterterrorism chief accused of him committing war crimes?

Ask the families of more than 4,200 U.S. troops who were killed in Iraq. Bush, who conveniently avoided serving in Vietnam, sent thousands of young people to their deaths in the Middle East in 2003, after he and members of his administration told demonstrable lies to make the case for an illegal war. The then-commander-in-chief falsely claimed that Iraq had weapons of mass destruction. He falsely claimed that Saddam Hussein was working with Al Qaeda. He has never apologized for these falsehoods.

Ask the family of Tareq Ayoub. He was the 35-year-old Al Jazeera correspondent who was killed when a U.S. warplane launched on airstrike on the network’s Baghdad bureau in April 2003, less than three weeks after Bush ordered the invasion of Iraq. You think calling journalists “fake news” is bad? According to the U.K.’s Daily Mirror newspaper, Bush “made clear he wanted to bomb Al Jazeera in Qatar” at a meeting with then-U.K. Prime Minister Tony Blair just eight days after the killing of Ayoub. Blair, according to the Mirror, had to persuade him not to.

Ask the family of Gul Rahman. As a major report by the Open Society’s Justice Initiative documented, it was Bush who “authorized the Central Intelligence Agency (CIA) to commence a secret detention program” after 9/11, under which suspected terrorists were held incommunicado in CIA black sites across the world, and it was also the then-president who granted the agency “expansive authority to engage in ‘extraordinary rendition’” — or the transfer of detainees to foreign governments for the purposes of interrogation and torture. (Asked by aides if he was OK with torturing detainees, Bush replied: “Damn right.”)

Rahman was a suspected Afghan militant in his early 30s, who was sent by the CIA in 2002 to a secret prison known as the Salt Pit. There, according to the Senate Intelligence Committee report on torture, he endured “48 hours of sleep deprivation, auditory overload, total darkness, isolation, a cold shower, and rough treatment.” Shackled to a concrete wall, and nude from the waist down, he froze to death — but the Bush administration never even bothered to notify his family.

Ask Maher Arar. The 32-year-old Canadian citizen was arrested at JFK Airport in New York in September 2002 and “rendered” to his native Syria, from where his family had fled in 1997. Back in Damascus, President Bashar al-Assad’s interrogators, with the assistance of questions supplied by Bush’s CIA, beat and tortured Arar. According to the findings of an official Canadian commission of inquiry, Arar was held in a cell the size of a grave and whipped with electrical cables.

Ask the 780 detainees who were held at the Guantánamo Bay prison camp in Cuba, after it was opened by Bush in January 2002. Forty of them still remain behind bars; 15of them were juveniles; nine of them died in custody. None of them were ever charged or convicted of a crime in a court of law. According to former Bush administration official Lawrence Wilkerson, the then-president knew many of the detainees at Guantánamo were innocent of any crimes but refused to release them for political reasons.

Ask the families of the victims of Hurricane Katrina. “People stood on rooftops waving their arms and pleading for help as the flood waters inundated their communities,” recalled USA Today on the 10th anniversary of one of this country’s worst natural disasters, and yet “day after day, George W. Bush continued a long-planned vacation at his 1,600-acre Prairie Chapel Ranch in Crawford, Texas. … When Katrina made landfall, Bush had been on holiday at his ranch for 27 days.” More than 1,800 Americans died and a Republican-led special Senate report later concluded that the Bush administration failed “at all levels to plan, prepare for, and respond aggressively to the storm.”

Ask the parents of Larry Robison. A man who was diagnosed with paranoid schizophrenia and considered “completely insane” when he carried out a series of brutal murders in 1982, Robison was one of 152 prisonersexecuted by Bush during his five years as governor of Texas — a higher number of executions than under any previous governor in modern American history. Robison’s parents begged Bush for clemency — as did the European Union, the Pope, and the National Alliance for the Mentally Ill — but to no avail. Bush ignored the evidence of insanity and signed off on the execution. A year earlier, the then-Texas governor had mimicked and mocked a clemency plea made by Karla Faye Tucker, the first woman to be executed in the Lone Star state since 1863, in a Talk magazine interview with Tucker Carlson. As Carlson wrote: “‘Please,’ Bush whimpers, his lips pursed in mock desperation, ‘don’t kill me.’”

George W. Bush is not a “kind, sweet man.” There is nothing “beautiful” about him. He was a monster as governor of Texas and a monster as president of the United States. Nor has he become any less monstrous since retiring from politics. In September 2018, Bush lobbied Republican senators to approve his former staff secretary, Brett Kavanaugh, to the Supreme Court — and reaffirmed his public support for Kavanaugh even after Christine Blasey Ford and others accused the judge of sexual misconduct.

Yes, the 43rd president is a better husband and father, more mentally and emotionally stable, and less of a racist or Islamophobe, than the current president. But is that really now our benchmark for making friends or being “kind”? If you’re not Trump, all is forgiven?

This slow but steady rehabilitation of the former president, and the whitewashing of his manifest crimes, cannot be left unchallenged. Bush may owe Ellen six bucks for nachos. He owes the rest of us a prison sentence at The Hague.

0 thoughts on “Dear Ellen: The Problem With George W. Bush Is Not His Beliefs—It’s His War Crimes”