HOME / WORLD / The Hugely Important OPCW Scandal Keeps Unfolding. Here’s Why No One’s Talking About It. 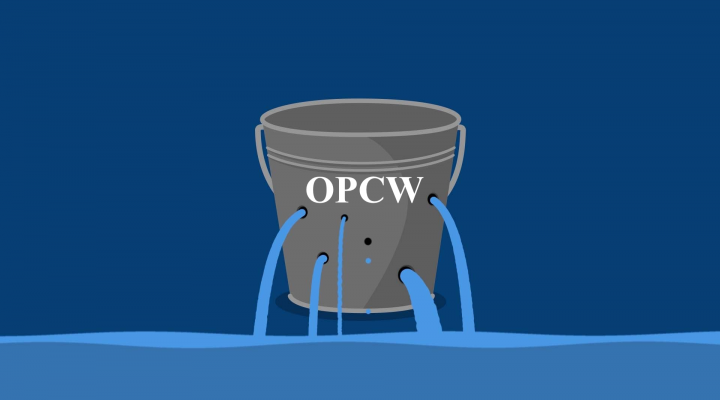 The Organisation for the Prohibition of Chemical Weapons is now hemorrhaging evidence that the US and its allies deceived the world once again about yet another military intervention, which should be a front-page story all over the world. Yet if you looked at American news media headlines you’d think the only thing that matters right now is indulging the childish fantasy that Donald Trump might somehow magically be removed from office via supermajority consensus in a majority-Republican Senate.

CounterPunch has published an actual bombshell of a report by journalist Jonathan Steele containing many revelations about the OPCW scandal which were previously unknown to the public. Steele is an award-winning reporter who worked as a senior foreign correspondent for The Guardian back before that outlet was purged of all critical thinkers on western imperialism; he first waded into the OPCW controversy last month with a statement made on the BBC revealing the existence of a second whistleblower on the organisation’s investigation into an alleged chemical weapons attack in Douma, Syria.

If you haven’t been following this story you can click here for a timeline of events to fully appreciate the significance of these new revelations about the Douma incident, but just to quickly recap, in April of last year reports surfaced that dozens of civilians had been killed in that city by chemical weapons used by the Syrian government under President Bashar al-Assad. This immediately drew skepticism from people who’ve been paying attention to the narrative manipulation campaign against Syria, since Assad had already won the battle for Douma and had no strategic reason to employ banned weapons there knowing that there would be a military strike in retaliation from western powers. True to form, a few days later the US, France and the UK launched airstrikes on the Syrian government.

The OPCW released its final report on Douma in March of this year, but that report has been contradicted by two separate whistleblowers from the Douma investigation. The first surfaced in May of this year with a leaked Engineering Assessment claiming the chlorine cylinders found at the crime scene were unlikely to have been dropped from the air, and that it was far more likely that they were manually placed there, i.e. staged, by the occupying opposition forces in Douma. The second whistleblower came forward last month with a day-long presentation in Brussels before a panel of experts assembled by the whistleblowing defense group Courage Foundation, the findings of which were published by WikiLeaks.

Chemical weapons watchdog accused by its own inspectors: see https://t.co/RRCu540aJv

This new report by Steele focuses on information provided to him by the second whistleblower, who is going by the pseudonym “Alex” out of fear for his safety. The information provided by Alex has turned out to be far more incendiary even than the leaked Engineering Assessment. Here are seven major highlights (hyperlinks go to the relevant article text they reference):

1- US government officials attempted to pressure OPCW investigators into believing that the Assad government was responsible for the Douma incident. The officials were placed in the same room as the investigators by the OPCW’s then-cabinet chief Bob Fairweather, which the investigators of course felt was a grossly inappropriate breach of the OPCW’s commitment to impartiality. For the record the US government already has a known history of bullying the OPCW, an ostensibly independent and international body, to force it to allow the advancement of pre-existing regime change agendas.

2- Alex reports that internal dissent on the OPCW’s official publications on the Douma incident was far more ubiquitous than previously known, saying “Most of the Douma team felt the two reports on the incident, the Interim Report and the Final Report, were scientifically impoverished, procedurally irregular and possibly fraudulent.”

3- All but one member of the team agreed with the Engineering Assessment that it was far more likely that the chlorine cylinders were manually placed on the scene by people on the ground.

4- Ian Henderson, the South African ballistics expert whose name was signed on the leaked Engineering Assessment, seems to have been responsible for leaking it. Whether Henderson himself was involved in the leak was not previously known to the public.

5- Investigators experienced pressures against saying anything about their mounting findings that no chemical attack occurred, with Alex calling it “the elephant in the room which no-one dared mention explicitly”.

6- The OPCW’s Final Report on the Douma incident explicitly claimed the investigation found “reasonable grounds that the use of a toxic chemical as a weapon took place. This toxic chemical contained reactive chlorine. The toxic chemical was likely molecular chlorine.” Yet according to Alex the levels of chlorinated organic chemicals found on the scene “were no higher than you would expect in any household environment” and were in fact “much lower than what would be expected in environmental samples”, comparable to or even lower than the World Health Organisation’s recommended chlorine levels for drinking water. This extremely crucial fact was actively and repeatedly omitted from the OPCW’s public reporting in a way Alex describes as “deliberate and irregular”.

7- Steele mentioned last month that he’d unsuccessfully reached out to the OPCW for comment on the second OPCW whistleblower’s revelations, and in his new article he confirms that the organisation is still dodging him, with both Fairweather and the OPCW’s media office refusing to respond. La Repubblica’s Stefania Maurizi has also been reporting that the OPCW is dodging the press on this important matter. The OPCW did respond to press inquiries after the first whistleblower surfaced in May, but it appears that someone has given the order to cease doing so with the claims of this second whistleblower.

This story — 2 whistleblowers accusing OPCW of suppressing evidence, under US pressure, to reach a conclusion that justified US strikes on Syria —
should be a global scandal. Instead it's widely ignored, except for a principled few like @caitoz who've called it from the start: https://t.co/hGSMVAan0d

If there were any correlation between newsworthiness and actual news coverage, the OPCW scandal would be making front-page international headlines today. Instead, the mounting evidence that the US and its allies committed a war crime based on false information and that a supposedly independent watchdog organisation helped them cover it up barely registers. Why is that?

If you ask Syria narrative managers like The Guardian’s George Monbiot or The Intercept’s Mehdi Hasan, this isn’t a big story because even if Assad wasn’t responsible for the Douma incident, it doesn’t matter because he’s still a very bad man. But this is an extremely intellectually dishonest obfuscation on their part, because this has nothing to do with whether or not Bashar al-Assad is a nice person. The OPCW covering up its findings exculpating the Syrian government on Douma wouldn’t be significant because it would mean that Assad is a good person, it would be significant because it would mean the US deceived the world about yet another military intervention. And it would make it much harder for the US to manufacture public support for other military interventions in the future.

Which is of course the real reason the political/media class is ignoring the OPCW scandal. Military violence is the glue that holds the US-centralized empire together, which means it is of utmost strategic importance that that empire retain the ability to manufacture consent for military violence going forward. Because plutocrat-controlled news media outlets are set up in such a way that their employees know their careers depend on protecting the empire upon which the plutocratic class is built, the OPCW scandal is an obvious no-go for anyone who wishes to remain in the business.

The only way this story will get mainstream coverage is if it goes viral without the assistance of the mainstream media, at which point the propagandists will be forced to report on it to save face and begin the near-impossible task of trying to regain control of the narrative. This will only happen if enough of us work together to shove the OPCW scandal into mainstream attention. I think this would end up being a very good thing for the world.

0 thoughts on “The Hugely Important OPCW Scandal Keeps Unfolding. Here’s Why No One’s Talking About It.”