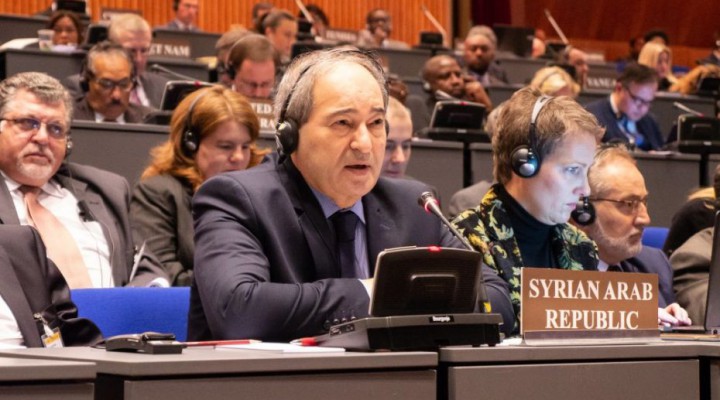 The revelations – studiously ignored by the mainstream media – shed a light on the tangled web weaved by the complicit media and the West’s shameless hypocrisy, involving the OPCW, Wikileaks and Julian Assange’s illegal detention.

A whistleblower from the Organization for the Prohibition of Chemical Weapons (OPCW) delivered to Wikileaks authentic documents to do with investigations into the Douma bombing in Syria in 2018.

These documents confirmed what many had been writing about for months, namely, that the OPCW’s investigations and conclusions were manufactured to reach a premeditated result that was unfavorable to the Syrian Arab Army and in line with the foreign-policy objectives of Washington, Tel Aviv, Riyadh, Paris, Ankara, Doha and London.

The US has previously used just this same formula, under the pretext of R2P (Responsibility to Protect), to justify the bombing of a country.

A chemical attack to be blamed on the Syrian army seemed like the most straightforward means to trigger R2P and achieve the desired foreign-policy objectives. However, what we now know from the documents published by Wikileaks is that the international organization supposed to ensure impartiality and objectivity falsified reports and procedures.

In the words of José Bustani, the first director-general of the OPCW and Brazil’s former ambassador to the United Kingdom and France:

“The convincing evidence of irregular behaviour in the OPCW investigation of the alleged Douma chemical attack confirms doubts and suspicions I already had.

I could make no sense of what I was reading in the international press. Even official reports of investigations seemed incoherent at best.

The picture is certainly clearer now, although very disturbing” “I have always expected the OPCW to be a true paradigm of multilateralism. My hope is that the concerns expressed publicly by the Panel, in its joint consensus statement, will catalyse a process by which the Organisation can be resurrected to become the independent and non-discriminatory body it used to be.”

The body that was supposed to guarantee impartiality connived to frame Damascus for a crime it did not commit, just so that the West had its excuse to conduct a bombing campaign against Syria.

In this perverse mechanism, any off-script testimony from Syrians on the ground, independent foreign journalists, or any other unapproved sources were summarily dismissed by the European and American press as biased and unreliable.

These Wikileaks revelations are a rare opportunity to look behind the curtain and understand the mechanisms that lead to millions of deaths, to countries being destroyed, and to generations being lost. We have already seen in the past how a hegemonic power like the United States acts, fabricating pretexts like “weapons of mass destruction”, is willing to try and maintain its position of dominance by hook or by crook in a strategic region like the Middle East.

We can discern in the Douma chemical attack a false-flag attack perpetrated by al-Qaeda militants (portrayed by the West as moderate rebels valiantly fighting against Assad), the OPCW presenting itself as the impartial arbitrator, and the mainstream media amplifying the lies produced by this supposedly impartial body, conditioning public opinion in the process to accept the use of force to put an end to the suffering in Syria allegedly perpetrated by Assad’s forces.

The legitimacy extended to al-Qaeda and its affiliates allowed for terrorists to carry out civilian attacks in Syria using chemical weapons for the purposes of blaming government troops, thereby justifying overt international support by the likes of the US, the UK and France. To guarantee the success of this conspiracy, the fraudulent reports of the OPCW were to provide the humanitarian justification for international intervention.

This whole matter is all the more disturbing when we consider the question of journalistic ethics. Journalists could very well have properly done their jobs and investigated the Douma chemical attack, collecting testimonies from civilian witnesses and recording footage. Instead, the media parroted Western propaganda, amplifying the compromised information of the OPCW.

It was left to Wikileaks to exercise proper journalism, publishing the verified information of the OPCW whistleblower, and in the process blowing the lid on a huge scandal that undermines the credibility of the West’s high-sounding proclamations.

This is the reason why Assange is behind bars while mainstream-media anchors earn millions of dollars conveying the officially approved propaganda to the public. Wikileaks tells the truth with its work, revealing how the Western powers are willing to do everything in their power to start new wars and pursue their imperialistic agenda.

We see in this Wikileaks revelation what has driven the current world order to be so unstable and the source of so much war and misery. The Western propaganda machine managed to compromise a body otherwise respected for probity for the purposes of inflicting the maximum possible damage to Syria.

This scandal is the latest example of how Western politicians, the mainstream media and international organizations are merely imperialistic tools employed to strike against geopolitical opponents.