Tankie, Conspiracy Theorist, And Other Pejorative Tools Of Narrative Control 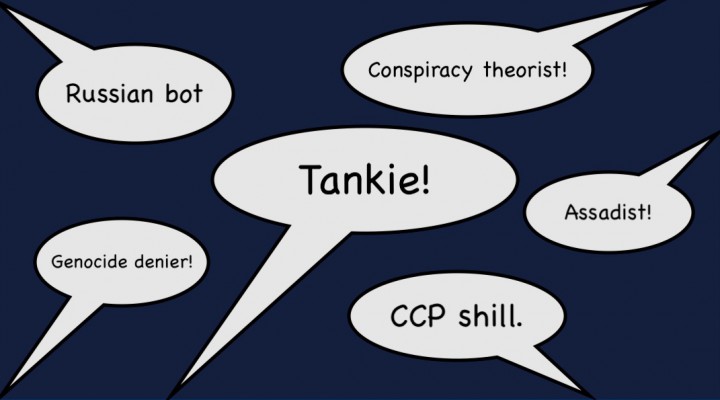 Bloomberg pundit Noah Smith had a very revealing interaction on Twitter the other day that I’ve been meaning to write about ever since.

It began with Smith sharing a screenshot of an article by journalist Yasha Levine which condemns US imperialist escalations against China and ties them to the sudden spike in anti-Asian hate crimes we’ve been seeing. Smith shared his screenshot with the caption, “I hold by my prediction that the American Left is going to split into A) social democrats, and B) foreign-policy-obsessed pseudo-tankies.”

“How do we stop the B group from driving the narrative?” one of Smith’s followers asked him.

“Well, first we teach everyone the word ‘tankie’!” Smith replied, with a Substack article he authored explaining that any leftist who opposes western imperialist agendas against China should be branded with that label and dismissed.

Well, first we teach everyone the word "tankie"!https://t.co/zzMSygnasw

Which is just so refreshing in its honesty, really. It’s been obvious for ages that such pejoratives are being used by imperialists to control the narrative in a way that benefits ruling power structures, but it’s not often you’ll have a mainstream narrative manager come right out and say that this is exactly what they are trying to do.

Smith’s admission that he is training his audience to bleat the word “tankie” at any leftist who is “obsessed” with a tiny trivial matter like US foreign policy in order to control the dominant foreign policy narrative is born out by the rest of his Twitter activity, which sees him repeating that word constantly and weaponizing it against anyone who expresses skepticism of the empire’s official foreign policy narratives.

“Tankie” used to be a term which referred specifically to British communists who supported the Soviet Union, but under the facilitation of narrative managers like Smith it’s enjoying a mainstream resurrection in which it is commonly weaponized against anyone to the left of Bernie Sanders who opposes US imperialist agendas. I wrote against anti-imperialism for years without anyone ever applying that pejorative to me, but now it comes up on a near-daily basis. I haven’t changed the basics of my beliefs or my approach to anti-imperialism, but the widespread use of “tankie” as a pejorative against people like me most certainly has changed.

It joins the ranks of famous weaponized pejoratives like “Russian bot”, “CCP propagandist”, “Assadist”, and the one size fits all perennial favorite “conspiracy theorist” in labels which can be applied to ensure the dismissal of anyone who voices skepticism of narratives that are being promoted by known liars to facilitate the agendas of murderous psychopaths. Another new crowd favorite is “genocide denier”, a label that gets applied to anyone who points out the glaring plot holes in the imperial Uyghur narrative which narrative managers are overjoyed about being able to use because it lets them equate skepticism of a geostrategically significant US narrative with Nazism.

What these pejoratives accomplish, as Noah Smith is well aware, is the ability to inoculate the mainstream herd from the wrongthink of anyone to whom that label has been applied. That way they never have to engage the argument or the evidence that gets laid out contradicting the official imperial line; as long as they can convince enough people to accept their pejorative as legitimate, they have a magical phrase they can utter to dispel any anti-imperialist argument which appears anywhere in the information ecosystem.

This is a major part of an imperial narrative manager’s job these days: smearing anti-imperialists and critical thinkers as untrustworthy. The debate is never to be engaged and counter-arguments are never to be made; why engage in a debate you will probably lose when you can simply explain to everyone why nobody should listen to the other side?

A perfect example of this would be the recent smear piece the Australian Strategic Policy Institute (ASPI) put out on The Grayzone with the title “Strange bedfellows on Xinjiang: The CCP, fringe media and US social media platforms“.

As explained in a thread by Grayzone‘s Aaron Maté, the government-funded and arms industry-funded think tank ASPI makes no effort in its report to dispute or debunk any of the reporting that The Grayzone has been putting out on China or on anything else. Rather, they simply work to associate the outlet with the Chinese government by citing incidents in which Chinese officials shared Grayzone articles on social media. By fallaciously associating The Grayzone with the Chinese government, narrative managers now have a weapon which enables them to dismiss the outlet as “CCP propaganda”.

As anyone who has been active in anti-imperialist online discourse knows, this is an extremely common tactic which narrative managers and their indoctrinated herd use to dismiss questions, criticisms and evidence which is inconvenient to the US-centralized imperial war machine. Try countering their claims with a well-sourced article full of robust argumentation and solid evidence, and they’ll dismiss you with a “Ha ha, THAT outlet? That outlet is propaganda!” Because it came from an anti-imperialist outlet like The Grayzone or Consortium News instead of an outlet which never fails to support US military agendas like The New York Times.

But it’s a completely ridiculous tactic if you think about it. All they’re really saying is “You can’t use that anti-imperialist outlet to substantiate your anti-imperialist position! You can only use the pro-US outlets which have helped deceive westerners into backing every US war!” It’s also logically fallacious; attacking the source instead of the argument is what people do when they can’t attack the argument.

Pay attention to the way imperial narrative managers try to use smears and pejoratives to file away anti-imperialists into a “don’t listen to the things this person says” box, and help others pay attention to it too. This is no more legitimate an argument than the Wizard of Oz yelling “Pay no attention to that man behind the curtain,” and it should be treated with no more respect than that.

0 thoughts on “Tankie, Conspiracy Theorist, And Other Pejorative Tools Of Narrative Control”