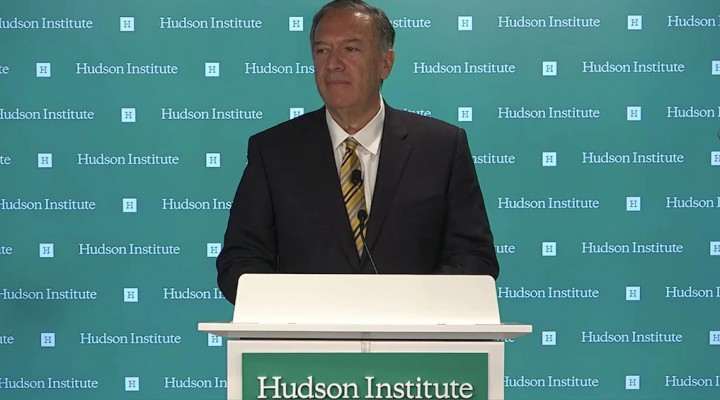 Former CIA director and secretary of state Mike Pompeo gave a speech at the Hudson Institute last week that’s probably worth taking a look at just because of how much it reveals about the nature of the US empire and the corrupt institutions which influence its policies.

Pompeo is serving as a “Distinguished Fellow” at the Hudson Institute while he waits for the revolving door of the DC swamp to rotate him back into a federal government position. The Hudson Institute is a neoconservative think tank which has a high degree of overlap with the infamous Project for the New American Century and its lineup of Iraq war architects, and spends a lot of its time manufacturing Beltway support for hawkish agendas against Iran. It was founded in 1961 with the help of a cold warrior named Herman Kahn, whose enthusiastic support for the idea that the US can win a nuclear war with the Soviet Union was reportedly an inspiration for the movie Dr Strangelove.

A think tank is an institution where academics are paid by the worst people in the world to come up with explanations for why it would be good and smart to do something evil and stupid, which are then pitched at key points of influence in the media and the government. “Think tank” is a good and accurate label for these institutions, because they are dedicated to controlling what people think, and because they are artificial enclosures for slimy creatures.

Pompeo’s speech is one long rimjob for the military-industrial complex which indirectly employs him. He repeatedly sings the praises of the weapons that are being poured into Ukraine, two of them by name: the Patriot missile built by Raytheon and the Javelin missile built jointly by Raytheon and Lockheed Martin, both of whom happen to be major funders of the Hudson Institute. He repeatedly decries the “disastrous withdrawal from Afghanistan,” and excoriates the Biden administration for failing to control the world’s fossil fuel resources aggressively enough in its efforts to “prostrate itself to radicals.”

Pompeo, easily ranked among the most fanatical imperialists on the entire planet, hilariously says that “China’s Belt and Road Initiative is a form of imperialism.” He decries a “genocide” in Xinjiang and repeatedly implies that China deliberately unleashed Covid-19 upon the world, calling it “the global pandemic induced by China.” He repeatedly claims that Vladimir Putin is trying to reconstitute the Soviet Union.

Along with praise for NATO and for the various anti-China alliances in the Indo-Pacific, Pompeo names “Ukraine, Israel, and Taiwan” as “the three lighthouses for liberty” which those alliances must work to support militarily. You will notice that those three “lighthouses” just so happen to be the hottest points of geostrategic conflict with the top three opponents of the US empire: Russia, Iran, and China.

But there are a couple of things Pompeo says which have some real meat on them.

“By aiding Ukraine, we undermined the creation of a Russian-Chinese axis bent on exerting military and economic hegemony in Europe, in Asia and in the Middle East,” Pompeo says.

“We must prevent the formation of a Pan-Eurasian colossus incorporating Russia, but led by China,” he later adds. “To do that, we have to strengthen NATO, and we see that nothing hinders Finland and Sweden’s entry into that organization.”

To stop a "Pan-Eurasian colossus" from forming, @mikepompeo stresses the importance of #Finland and #Sweden joining @NATO as well as #Russia's resulting increase in military capability if they are denied entry. pic.twitter.com/er0BKvcjEK

That’s all the major international news stories of today are ultimately about, right there. Underlying all the smaller news stories about conflicts with nations like Russia, China and Iran, there’s one continuous story about the US power alliance trying to secure planetary domination by relentlessly working to subvert any nation which refuses to align with it, and about the nations who oppose that campaign working against it with steadily increasing intimacy.

It’s worth calling this to mind, as NATO for the first time designates China a threat due to its alignment with Russia and as NATO’s secretary-general admits that NATO has been preparing for a conflict with Russia since 2014. It is worth calling to mind the fact that the US has had a policy in place since the fall of the Soviet Union to prevent the rise of any rival superpower to deny any serious challenge to its planetary domination. It is worth calling to mind that in 1997 the precursor to the US Space Force committed to working toward “full spectrum dominance,” meaning military control over land, sea, air, and space.

They are right that China challenges NATO interests: the NATO cartel's existential goal of enforcing a US global dictatorship, one that imposes neoliberalism on the planet, destroying any country that proposes a state-led, people-centered economic model https://t.co/y5HCWAGkiL

People like to talk about secret conspiracies by shadowy cabals to establish a one-world government, but what is by far the most tangible and imminent global domination agenda has been orchestrated right out in the open. The US government has long sought to unite the world under a single power structure, no matter how much violence and devastation it needs to inflict upon humanity and no matter how much world-threatening nuclear brinkmanship it needs to engage in to do so.

This is the US empire which corrupt psychopaths like Mike Pompeo support. A power structure which wages nonstop wars in order to keep the peace, which continually oppresses populations around the world in order to protect freedom, and which risks nuclear war with increasingly reckless aggression to in order save the world.