HOME / WORLD / The United States Has Produced Very Few Anti-Imperialists. Noam Chomsky Is Not Among Them 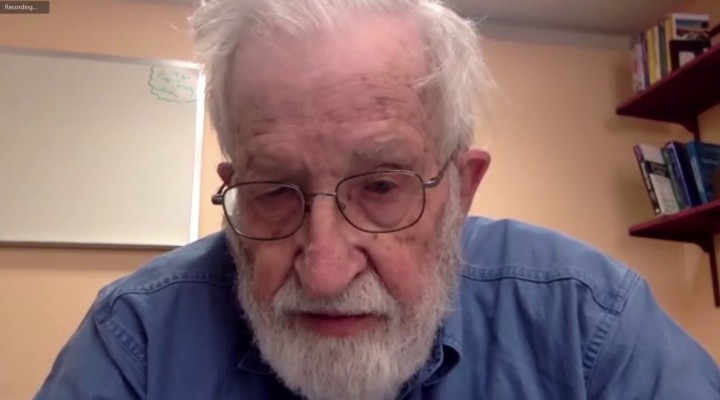 Stephen Gowans– Imperialism has penetrated the fabric of our culture, and infected our imagination, more deeply than we usually think.—Martin Green. [1]

In a recent Intercept interview with the beautiful soul Mehdi Hassan, Noam Chomsky resumed his efforts to recruit the political Left into a scheme to support US imperialism.

In the interview, Chomsky spoke about his reasons for trying “to organize support for opposition to the withdrawal” of US troops from Syria. US troops ought to remain in Syria, he said, to deter a planned Turkish invasion and to prevent what he warned would be the massacre of the Kurds. Yet weeks after the Turks moved into northeastern Syria nothing on the scale of massacres had occurred.

The high-profile anarchist, former champion of international law, and one-time outspoken critic of wars of aggression, supports the uninterrupted invasion of Syria by US forces, despite the fact that the invasion is illegal and contravenes the international law to which he had so frequently sung paeans.

But the principles he once upheld appear to have been sacrificed to the higher goal of defending the anarchist-inspired YPG, the Kurdish group which had sought and received support from Washington to establish a Kurdish mini-state in Syria in return for acting as a Pentagon asset in the US war on the Arab nationalist government in Damascus. In this, the YPG recapitulated the practice of political Zionism, offering to act as muscle in the Levant in exchange for imperialist sponsorship of its own political aspirations. For Chomsky, the desired end-state—what he would like the political Left to rally in support of—is the restoration of the status-quo ante, namely, robust US support for a Kurd mini-state in Syria.

Washington’s illegal military intervention has been the guarantor of the YPG’s aspirations to create a state on approximately one-third of Syrian territory. A YPG state east of the Euphrates would be an asset to the US imperialist project of expanding Washington’s already considerable influence in the Middle East. A Kurd-dominated state under the leadership of the YPG would function as what some have called a second Israel. As Domenico Losurdo put it in a 2018 interview,

In the Middle East, we have the attempted creation of a new Israel. Israel was an enclave against the Arab World, and now the US and Israel are trying to realize something similar with the Kurds. That doesn’t mean to say that the Kurds don’t have rights and that they haven’t been oppressed for a long time, but now there’s the danger of them becoming the instruments of American imperialism and Zionism. This is the danger—this the situation, unfortunately. [3]

To make the US invasion palatable to the political Left, Chomsky misrepresents the US aggression as small-scale and guided by lofty motives. “A small US contingent with the sole mission of deterring a planned Turkish invasion,” he says, ‘is not imperialism.” But the occupation is neither small, nor guided by a mission limited to deterring a planned Turkish invasion. Either Chomsky’s grasp of the file is weak, or he’s not above engaging in a spot of sophistry.

Last year, the Pentagon officially admitted to having 2,000 troops in Syria [4] but a top US general put the number higher, 4,000. [5] But even that figure was, according to the Pentagon, an “artificial construct,” [6] that is, a deliberate undercount. On top of the infantry, artillery, and forward air controllers the Pentagon officially acknowledges as deployed to Syria, there is an additional number of uncounted Special Operations personnel, as well as untallied troops assigned to classified missions and “an unspecified number of contractors” i.e., mercenaries. Additionally, combat aircrews are not included, even though US airpower is critical to the occupation. [7] There are, therefore, many more times the officially acknowledged number of US troops enforcing an occupation of parts of Syria. Last year, US invasion forces in Syria (minus aircrew located nearby) operated out of 10 bases in the country, including “a sprawling facility with a long runway, hangars, barracks and fuel depots.” [8]

In addition to US military advisers, Army Rangers, artillery, Special Operations forces, satellite-guided rockets and Apache attack helicopters [9], the United States deployed US diplomats to create government and administrative structures to supersede the legitimate government of the Syrian Arab Republic. [10]

“The idea in US policy circles” was to create “a soft partition” of Syria between the United States and Russia along the Euphrates, “as it was among the Elbe [in Germany] at the end of the Second World War.” [11]

During the war on ISIS, US military planning called for YPG fighters under US supervision to push south along the Euphrates River to seize Syria’s oil-and gas-rich territory, [12] located within traditionally Arab territory. While the Syrian Arab Army and its allies focused on liberating cities from Islamic State, the YPG, under US direction, went “after the strategic oil and gas fields,” [13] holding these on behalf of the US government. The US president’s recent boast that “we have secured the oil” [14] was an announcement of a longstanding fait accompli.

The United States has robbed Syria of “two of the largest oil and gas fields in Deir Ezzour”, including the al-Omar oil field, Syria’s largest. [15] In 2017, the United States plundered Syria of “a gas field and plant known in Syria as the Conoco gas plant” (though its affiliation with Conoco is historical; the plant was acquired by the Syrian Gas Company in 2005.) [16] Russia observed that “the real aim” of the US forces’ (incontestably denominated) “illegal” presence in Syria has been “the seizure and retention of economic assets that only belong to the Syrian Arab Republic.” [17] The point is beyond dispute: The United States has stolen resources vital to the republic’s reconstruction, using the YPG to carry out the crime (this from a country which proclaims property rights to be humanity’s highest value.)

Joshua Landis, a University of Oklahoma professor who specializes in Syria, has argued that by “controlling half of Syria’s energy resources…the US [is] able to keep Syria poor and under-resourced.” [18] Bereft of its petroleum resources, and deprived of its best farmland, Syria is hard-pressed to recover from a war that has left it in ruins.

To sum up, the notion that the US occupation is small-scale is misleading. The Pentagon acknowledges that it deliberately undercounts the size of its contingent in Syria.  But even if there are as few US boots on the ground in Syria as the US military is prepared to acknowledge, that still wouldn’t make the US intervention trivial.

US boots on the ground are only one part of the occupation. Not counted are the tens of thousands of YPG fighters who operate under the supervision of US ground forces, acting as the tip of the US spear. These troops, it should be recalled, acted as muscle for hire to seize and secure farmland and oil wells in a campaign that even US officials acknowledge is illegal. [19]

Another part of the occupation—completely ignored by Chomsky—is US airpower, without which US troops and their YPG-force-multiplier would be unable to carry out their crimes of occupation and theft. US fighter jets and drones dominate the airspace over the US occupation zone. Ignoring the significant role played by the US Air Force grossly distorts the scale of the US operation.

What’s more, Chomsky’s reference to the scale of the intervention as anodyne is misdirection. It is not the size of an intervention that makes it imperialist, but its motivations and consequences.

Additionally, Chomsky completely misrepresents the aim of the US occupation. It’s mission, amply documented, is to: sabotage Damascus’s reconstruction efforts by denying access to revenue-generating territory; to provide Washington with leverage to influence the outcome of any future political settlement; and to block a land route over which military assets can easily flow from Tehran to its allies Syria and Hezbollah. [20] In other words, the goal of the occupation is to impose the US will on Syria—a textbook definition of imperialism.

The idea that it is within the realm of possibility for Washington to deploy forces to Syria with the sole mission of deterring aggression is naïveté on a grand scale, and entirely at odds with the history and mechanisms of US foreign policy. Moreover, it ignores the reality that the armed US invasion and occupation of Syrian territory is an aggression itself. If a man who has been called the principal critic of US foreign policy can genuinely hold these views, then Martin Green’s contention that “Imperialism has penetrated the fabric of our culture, and infected our imagination, more deeply than we usually think,” is surely beyond dispute.

The US occupation, then, is more substantial than Chomsky alleges; it is an aggression under international law, not to say under any reasonable definition; the claim is untenable that the sole motivation is to deter Turkish aggression; and the US project in Syria is imperialist. All the same, one could still argue that US troops should not be withdrawn because their presence protects the YPG and the foundations of the mini-state is has built. If so, one has accepted the YPG’s and political Zionism’s argument that it is legitimate to rent oneself out as the tool of an empire in order to achieve one’s own narrow aims, even if it is at the expense of the right of others to be free from domination and exploitation.

[8] Dion Nissenbaum, “Map said to show locations of US forces in Syria published in Turkey,” The Wall Street Journal, July 19, 2017.

0 thoughts on “The United States Has Produced Very Few Anti-Imperialists. Noam Chomsky Is Not Among Them”