HOME / SOCIAL/CULTURAL / Every Billionaire Is A Predator: Notes From The Edge Of The Narrative Matrix 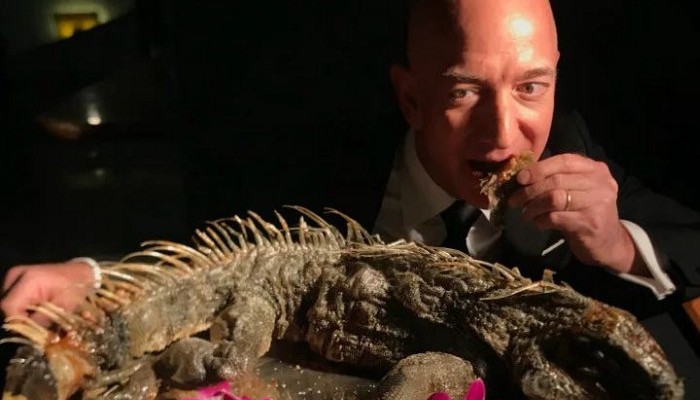 Step 1: Be the billionaire class.

Step 2: Buy up all news media.

Step 5: Dominate the narrative about what’s going on in the world.

It’s amazing how after all the lies we know we’ve been told about countries our rulers don’t like people are still all derp duhh China’s harvesting organs and Russia’s attacking our democracy and Iran wants to nuke us and Maduro’s a dictator and Assad gasses babies for fun.

It is true that social media platforms are run by oligarchs and depraved government agencies. It is also true that ideas and information are moving vastly faster than they used to, in a way establishment power structures can’t really keep up with. Denying either of these is dumb.

MSM has always prevented enlightened ideas from ever moving at the speed of print or broadcast media, which means until social media they mostly moved at the speed of university papers and books. They took literally years to circulate. The speed jumped from that to instantaneous. To think this isn’t having an impact on our collective consciousness is demented. Our species has literally never looked anything like this. We’re now like a giant planetary brain in which each of the billions of internet-connected humans is a neuron. This can’t not change us.

Obviously establishment power structures are working to bring this unprecedented movement of ideas and information under tight control, but there’s only so much control you can exert over a force this big. Past a certain point it’s like trying to wrestle a tornado. We’re moving.

The relationship between Wall Street numbers and people’s wallets is more divorced than ever. People are more aware than ever that anything they read can be propaganda or disinfo. Deep fakes make it impossible to even trust video. Narrative itself is crumbling on all levels.

Remember Americans, if you have a problem with the fact that your system literally makes it impossible to elect a president who isn’t pure dog shit, you are crazy and murderous and the worst person in the world.

Now is not the time to take a stand against America’s corrupt electoral process. You should wait until after Joe Biden is elected, then wait until after he is re-elected, and keep waiting, and just keep on waiting until planet Earth is one more cold dead rock in the solar system.

Angela Davis, Noam Chomsky, Terence McKenna’s ghost, literal Buddha and Actual Biblical Yahweh could all show up on my doorstep telling me to support Joe Biden for president and I’d still tell them to go sniff farts.

Julian Assange’s Twitter account was one of the most interesting, heterodox and insightful voices in the world before he was silenced and it’s absolute bullshit that we’ve had to navigate this bizarre and confusing political landscape without the resource of his perspective.

People who still believe Trump is fighting the establishment remind me of senior citizens gratefully entering their credit card numbers to every message that pops up telling them their computer urgently needs virus protection.

Not every predator is a billionaire, but every billionaire is a predator.

Capitalism will let you starve to death while sitting meters away from food.

I get that people are scared and stressed out, but the way masks have been turned into yet another stupid fucking culture war partisan wedge issue is probably the dumbest and most annoying widespread debate that I have ever seen.

Everyone who writes about propaganda and government lies is expected to have a really strong opinion about Covid-19 and masks and lockdowns, but I just don’t and I can’t help it. I find the whole thing ultimately irrelevant and boring and have nothing to add to the debate.

I find that people get ridiculously irrational and emotional about it, and I find that both sides of the debate have a lot less evidence for many of their beliefs than they think they do. I pay attention to actual concrete policies which threaten to facilitate pre-existing authoritarian agendas like increased tech surveillance, and I’ve written multiple articles about such things. But getting involved in the hysterical shrieking about masks, the economy and just how deadly the virus actually is blah blah blah is just completely uninteresting to me. It doesn’t in and of itself affect the large-scale power dynamics I write about.

I think a lot of the intensity in this debate has a lot more to do with the fact that people are scared and stressed out than actual facts and data. I see a lot of sloppy thinking and conflation of issues that should be kept distinct, and not a lot of emotional wisdom. I think discourse about the virus would greatly benefit from people just taking responsibility for their emotions, feeling their feelings all the way through, completely divorcing themselves from partisan thought, thinking carefully, then seeing what remains.

And that’s really the extent of my opinions on the matter. There are a lot of people who are a lot more knowledgeable than myself on the actual science of these matters, and I have nothing to add to that conversation. People tell me it’s because I’m trying to appear nonpartisan or because I’m afraid of being called a conspiracy theorist, but really I just don’t have any opinions on the matter that are strong enough to write about.

Sorry if that doesn’t conform to your expectations, but I’m not going to start writing about something just because that’s what everyone else is doing.

Me, a naive idiot: The world can be saved by a mass-scale shift in human consciousness into a healthy relationship with mental narrative.

Smart, realistic person: No that’s stupid and impractical. The world will be saved by monopolistic profit-chasing tech oligarchs.

The most important work you need to do to be a good parent is not reading the right books or getting the right parenting philosophy, it’s healing your own bullshit so you don’t inevitably pass it down to them. If you don’t work on yourself, you can’t help giving them your issues.

0 thoughts on “Every Billionaire Is A Predator: Notes From The Edge Of The Narrative Matrix”