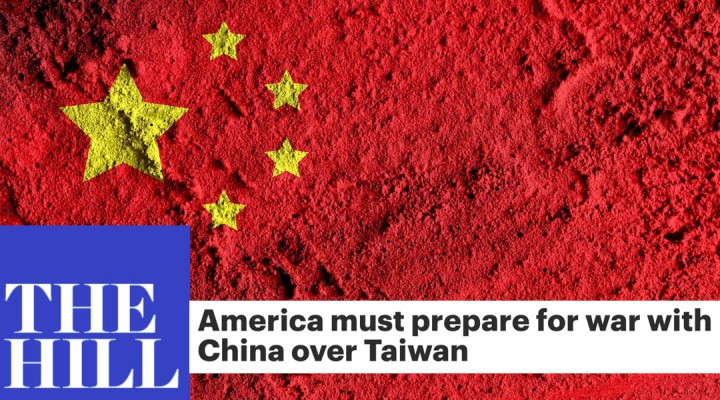 If you thought western mass media have been brazenly pushy with their anti-China propaganda, wait til you see The Hill’s appalling new opinion piece titled “America must prepare for war with China over Taiwan“.

“China’s massive investment in the People’s Liberation Army (PLA) may show China is preparing to fundamentally change the status quo and preparing for possible war with the United States over Taiwan,” the piece begins. “To deter China, the United States must rapidly build up its forces in the Pacific, continue to strengthen military alliances in the region to ensure access to bases in time of conflict, and accelerate deliveries of purchased military equipment to Taiwan.”

The article goes on to narrate about Taiwan’s importance on the global chessboard and why we should all expect a full-scale invasion by Beijing quite soon, casually discusses a direct military conflict between two nuclear-armed nations like it’s no big deal, and calls on the Biden administration to “articulate to the American people why Taiwan’s defense is critical to the United States.”

Then at the very bottom of the article you get to the part that really matters: the information about the author.

Apparently this “retired” senior CIA officer has been spending his “retirement” churning out war propaganda articles for The Hill with titles like “The US cannot allow China to think it will abandon Taiwan” and “The next US president has a tall order: Keeping China in check“, as well as acting as an expert source for virulent anti-China propaganda rag The Epoch Times.

Now that’s the face of a man who’d be first to volunteer for duty on the front lines in defense of what he believes in. You look at that man and can’t help but imagine him charging into Taipei bleeding red white and blue firing an M4 carbine for freedom and democracy. He’s not just talking about sending our sons and daughters into this war, no siree.

Why is it that all the worst warmongering narrative managers are always weird-looking little nerds who plainly wouldn’t know how to hold their own dicks, much less a gun? Were they bullied so bad in school that they just have to act out their pent-up aggression by helping to incinerate families in the global south over crude oil or something? What the hell is wrong with these freaks?

Anyone who supports the idea of the US and its allies entering into a third world war against a nuclear-armed nation to determine who governs an island off the Chinese mainland is an enemy of humanity. Such a war could easily kill tens of millions of people if engaged with full commitment, which could turn into billions at any time if it went nuclear. I hope Beijing never launches an unprovoked attack on Taiwan (unlikely), and I hope the US doesn’t provoke it into doing so (far more likely), but if all this brinkmanship spins out of control and that does indeed happen then entering into such a war to stop it would benefit nobody but a few sociopaths in Washington, Langley and Arlington. And quite possibly not even them.

Contrary to what propagandists like Sauer keep implying, the US is not even treaty-bound to defend Taiwan militarily and hasn’t been since 1979 when the only such treaty was annulled during Washington’s campaign to coax Beijing away from the Soviet Union. Yet because of their steadily escalating propaganda campaign, for the first time ever a majority of Americans surveyed on whether they’d support going to war with China over Taiwan now reportedly say yes.

Citing US Threats, #Russia and #China Agree to Expand Military Cooperation
US pressure has pushed the two countries closer together
by Dave DeCamp @DecampDave https://t.co/gmhn52PgKh pic.twitter.com/lfSssnID2Z

At best all these manipulations are geared toward manufacturing consent for pouring vastly increased military resources into the US empire’s ongoing pivot to Asia, which just by itself will necessarily include myriad provocations against the Chinese government which can easily escalate into war at any time. These people are playing games with the lives of every living organism on this planet, and they are suffering no consequences for doing so.

And now Moscow and Beijing are moving further into a military partnership that seems to be getting closer by the year in response to aggressions from the US and its client states, which, I dunno, I’m no historian but maybe might be cause for alarm when you’ve got world powers splitting into two increasingly hostile global alliances. Could that lead to something bad? It seems like maybe that could lead to something bad.

Cornered animals are dangerous, especially ones with fangs and claws. Dying empires are dangerous, especially ones with nuclear weapons. We’re being aggressively propagandized into consenting to insanely dangerous agendas geared toward maintaining US unipolar hegemony in defiance of the natural movement we are seeing toward a multipolar world. We are seeing signs everywhere that the drivers of empire are preparing to do some very, very crazy things in order to stop that movement and maintain their dominance. The fact that they are still ramping up their propaganda campaign is concerning, to say the least.

Why is the US Moving Taiwan’s Chip Manufacturing to Arizona?